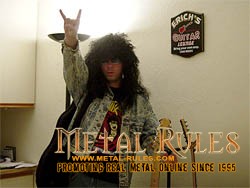 “Louder Than Hell: The Definitive Oral History Of Metal” by Jon Wiederhorn and Katherine Turman.  Track down bygone metal fanzines and you can find most of these quotes.  This is not a work of extensive digging, but a work that should have been done long ago, giving the folks in the business the voice to help trace the history of metal.  A thoroughly engrossing read.

Malazan Book Of The Fallen by Steven Erikson – Epic high fantasy in a class of its own. Fans that are exasperated with George R.R. Martin’s lack of urgency to finish A Song Of Ice And Fire will find Erikson a welcome interim read.

Ratebeer.com – My ultimate reference guide to sampling the world’s beers.

“The Collectors Guide To Heavy Metal :Four Volumes  70s-00s” –  Martin Popoff.  Pretty much my equivalent of the bible.

Vinio- Snap a photo of a wine bottle, and get ratings and reviews. Track what you try by simply snapping a pic of the wine bottle label.

Favorite bands/artists: Initially, Kiss. I had their first album when I was six years old. Iron Maiden came next, closely trailed by Metallica, Judas Priest and Queensryche. During my second year in college Savatage claimed the top spot and then after that, I ceased to have a favorite. Currently I really enjoy Circle II Circle, Hardcore Superstar, Sentenced, Knight Fury, & Ghost.
Least favorite bands/artists: Far too many to list, but basically anything lacking passion or spirit, especially formulaic music composed explicitly for mass consumption. Examples would be Lady Gaga, Katy Perry, and Beyonce to name a few.

Most Overrated Band/Artist: Another huge list, but I’ll say Korn, Slipknot, Cannibal Corpse, Killswitch Engage and Trivium in metal, Lauryn Hill, Beck and a host of others in pop/rock.

Most Underrated Band/Artist: This is difficult to define, as plenty of well-known metal bands never received their just dues. However, Lake of Tears, Tyketto, Vanderhoof, Morgana Lefay & Fifth Angel are almost universally unknown, but great bands.

Band/Music Experience: I have played in two bands, recorded one demo, played in talent shows, and live on a local radio station. Instrument: Rhythm and Lead Guitar

CD you hate to admit is part of your collection: None. If I don’t like ‘em, I toss ‘em.
Spoken Languages: English.

This changes from time to time. I have my overall top albums, but it is a lengthy list that I cannot fit into 12. However, as of 2020 this is what I roughly consider my top 12 albums of all time.
1. Iron Maiden – Live After Death
2. Led Zeppelin – Physical Graffiti
3. Queensrÿche – Operation: Mindcrime
4. Judas Priest – Unleashed In The East: Live In Japan
5. Fates Warning – Parallels
6. Paradise Lost – Draconian Times
7. Metal Church – Hanging In The Balance
8. Candlemass – Epicus Doomicus Metallicus
9. Savatage – Edge Of Thorns
10. Sepultura – Chaos A.D.
11. Ratt – Out Of The Cellar
12. Dokken- Tooth and Nail