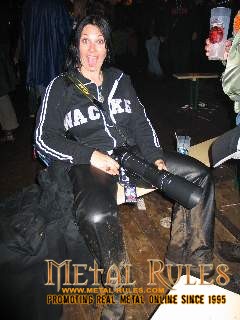 Classic Pick
Anything by Whitesnake

Eye Color: blue/green/grey depending on the mood and amount of sleep

Brief description of how you came to MR: Lord Alvarez of Dark Order told me about MR

Best thing about working for MR: I’ve discovered a whole new metal world and forged great friendships with some of the metal-rules brothers

Worst thing about working for MR: While renovating these past 2 years-finding the time to write my material

How/when you first got into metal: Kiss in 1977, but my rebirth was during the late 80s/early 90s with bands like Skid Row, Whitesnake not to mention Yngwie Malmsteen and local bands which hit the scene, including Mortal Sin, Candy Harlots, De Mont, Roxus, Empire. After a slump during the grunge period I was introduced to “power metal” by Dungeon and the European metal scene via Edguy’s Theater of Salvation. I haven’t looked back since.

Favorite Metal Genre(s): as long as it’s fast and have melodic elements

First Metal CD ever bought: ok, when I started my collection, it was still tapes and vinyl. Kiss Alive I & II

Band or other music industry experience: What haven’t I done? Singer — performing since I was 8
Publicist — metal and non-metal bands for over 15 years
Photographer — Dark Order CD, Dungeon CD plus millions of live and promo photos for local publicity
Promoter — tried to open an all-ages venue in Sydney but the christian powers shut me down 2 days before opening night *!%$#@%$ It was hailed  “the best promoted gig that never happened!”
Writer — reviews and reports

Favorite bands/artists: How long have you got!?
METAL:
equal 1st. Edguy and Sonata Arctica
3. Nightwish
4. anything Finnish lol
5. anything with bagpipes

Least favorite bands/artists: I don’t waste energy or time thinking about things that don’t impress me

Most underrated bands/artists: I think every metal band is underrated in one way or another

Favorite album cover: Don’t understand how people get a happy when they see the artwork of a CD prior to release, I don’t really pay attention to artwork but do get frustrated then the sleeves are unreadable because of the artwork

10 favorite albums: (in no particular order) This is always so hard because I forget what I have most of the time.
Duran Duran – Seven and the Ragged Tiger
Edguy – Theater of Salvation
Sonata Arctica – Wintersheart Guild
The Damned – Phantasmagoria
Skid Row – Skid Row
Whitesnake – Greatest Hits
Poisonblack – Escapexstacy
Iced Earth – Something Wicked This Way Comes
Alice Cooper – Trash
Geisha – Geisha

CD you hate to admit is part of your collection: Jason Donovan – it’s there because of a person involved in its production

Hobbies: I’m consumed by endless renovations on a house that was neglected for 30 years

Favorite films: See Spot Run, Turner and Hooch (what can I say? I’m a woman of simple pleasures), Queen Margot (French), Not Everyone is Fortunate Enough to have Communist Parents (French), Peculiarities of the Russian Hunt/Fishing Trip (Russian), Wall-E, Horton Hears a Who, Up,

Favorite books: I keep re-reading the Harry Potter series and am hooked on the Anita Blake series

Favorite TV shows: Big Bang Theory, Kommisar Rex reruns; Supernatural; since becoming a regular traveller I like the customs/boarder control shows; NCIS; Tell Me Lies has just started her and first episode was good; Food Safari (SBS); Long Way Down (Across); I watch way too much tv at night-it’s how I relax

Favorite food: I love lots of flavours. Good celebrations are all about prawns, usually tiger have the sweetest meat. Mangoes, icecream (had a wicked espresso gelato in Rome last summer), hazelnuts in food: hazelnuts in chocolate, hazelnut icecream and there’s an awesome hazelnut muesli you can get in Austraia

Which song should be played at your funeral: err a lot of Gregorian chanting

Person you’d most like to meet: I’ve met a lot of them already and I doubt it would be anyone profound unless it was someone from the past whom I would like the bitch slap and ask “What the hell were you thinking?”

Biggest thrill in life (so far): a first kiss (with anyone), international metal festivals

Five favorite links:
They’re so not metal at the moment
1. weather websites, I’m always interested in what’s happening in the places I love
2. a life-time’s supply of wishlists here shop.nuclearblast.de/
3.
4.
5.

Final comments about yourself:  There’s only so much temptation a person can handle 😉