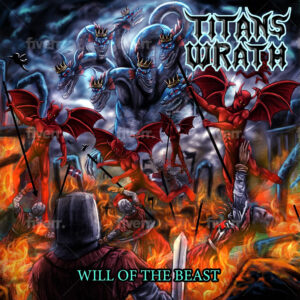 Titan’s Wrath from San Bernardino, California are relatively new band who have previously released a 6 song EP and 5 track demo. They return again with this 5 track EP called WILL OF THE BEAST. The band can loosely be called USPM or old school thrash with nods to classic heavy metal and is the norm with classic thrash metal.

On this 5 track EP we are given a lesson in thrash metal with trad metal overtones. The opening song “Hell’s Gate” starts with an almost old school Swedish death metal dirge before picking up and sounding more like old school thrash. That was the only moment on the EP that made me thing of anything death metal however. The vocals immediately reminded me of Russ from Forbidden but a few octaves lower in a powerful Blaze Bailey range. Musically I’m also somewhat reminded of Forbidden as they are thrash, but the vocals remind one of more traditional metal styles. The title track “Will of the Beast” has a killer scream at the 3:25 mark….dude, more of that please! It was Halford-esque and I love that kinda vocal. Nice rippin solo in this track too. I can see why they chose this as the EP’s title. Next is “Night Terror” which has some very nice razor sharp riffs that build up the intro to the song very nicely as the intensity rises. Again, this one is more classic thrash than it is power metal. The closing two songs “Changes” (no not a black sabbath cover) and “Crusader” (no not a Saxon cover) were good but didn’t stick in my mind as much. Maybe with a few more listens they will draw me in.

The bio that came with this EP says “With vocals on par with Bruce Dickinson, Rob Halford, and King Diamond…” – well, no. They are nothing like any of those. They are more in a powerful Blaze Bailey range, and UPSM comes to mind, some vocals a la Agent Steel maybe? Definitely not stratospheric like the singers referenced in the bio. This is not to say the vocals are not cool, but there is very little of those singers in the sound here other than the vocals are “clean” and melodic. My only other constructive criticism is the production as it is a bit noisy and distracts sometimes. One doesn’t need a huge budget and a multi-million dollar studio to make something that sounds good. With a better production, Titan’s Wrath could possibly take things to the next level and I look forward to checking out where they go next!

Hell’s Gate
Will Of The Beast
Night Terror
Crusader
Changes