Happy New Year Metalheads!! 2022 was an incredible year for metal and it’s going to be hard to top last year for killer metal releases. However, 2023 has already said, “Hold my beer!” Yes….already! I’ve been following Canada’s shredder Ric Galvez and his project MALICE DIVINE. I knew he once played live alongside another Canadian virtuoso Dean Paul Arnold in Arnold’s project PRIMALFROST. I had also listened to his self titled debut album but I was not in a good position to give it more than a passing listen at the time. When news of a brand new MALICE DIVINE album, Everlasting Ascendancy was announced I was excited to see what the finished product was going to sound like. Then, with the release of the first single/playthrough video, “Silenced Judgement,” I knew this was going to be special.

That single kicks off the album and what a way to kick off the album. The riffs and and the sheer energy of the song creates the right atmosphere. There’s a section in this song where the riffing reminds me of the riffing style of IMMORTAL. There are a lot of DISSECTION comparisons here and, although I do agree, Galvez also makes sure that his signature is on these songs. Yes, the riffing is a blackened melodic death metal but what sets this apart is the solos. This guy can shred. The eight minute epic “Apparitions of Conquest” follows the opener and this song has a much darker atmosphere but is an epic song. The riffs go from tremolos to traditional metal riffs but the solos are insane. There are at least four solos on this song and each are not just wankfests but well structured and fit the song adding that melody that leads and solos add. In fact, the song is structured so that you lost those eight and a half minutes. “Usurping the Paragon” follows that and completes the opening trio. By now you get the idea of what is going on with this album and you are ready to hear how the remainder unfolds.

The really interesting thing about this album is a couple of the songs were written several years ago but listening to the album, each song put together creates a coherent effort. The opener, for example, was written back in 2014 as well as “Illusions of Fragmentation” was written in 2015. However, as they stand side by side with the other songs on this album you can tell that his approach to songwriting has been consistent. Not all songs are speed fests either. Sure “Parasitic Demons” rips through you but “At One With Infinity” before it was a mid tempo song that is no less heavy or brilliant. But at the end of the day its the song structures, how he uses the riffs to create songs that flow coherently and then those godly solos. In this mix of black and melodic death metal the solos seem to be an afterthought in a lot of cases, but not here. Galvez uses the solos to add layers to the song as well as melody. Pick any song on the album and you will be treated to some of the tastiest shredding. I would also be amiss if I did not mention the epic closer and title track. This song is just over eight minutes and really sums up everything this band is. Infectious riffing, killer melodies, some softer parts and interludes….and those solos…and we’re not even halfway through the song!

I finally got the chance to fully digest a MALICE DIVINE album and let me say that I will be returning to the original to familiarize myself with those songs as well. This is one of the first albums to come out this year and it is this strong. So as we gather our thoughts for AOTY 2022, an early contender for 2023 kicked this year off right! This album is essential. You’re welcome! 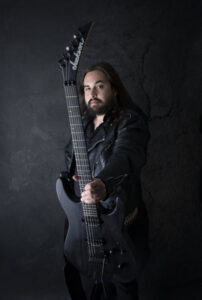