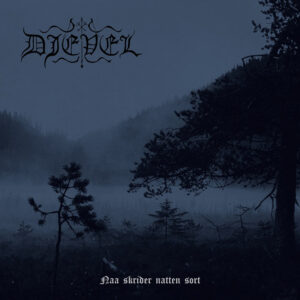 As winter approaches it seems that I crave black metal, and not just any black metal but good old fashioned second wave Norwegian black metal. One of the bands that actually do second wave black metal justice are DJEVEL, a band that may have formed in 2009 but the members were already steeped in the black metal lexicon. The early version of the band featured former ENSLAVED drummer Dirge Rep and currently features former EMPEROR drummer, the legendary Bård “Faust” Eithun. I have enjoyed each album I’ve heard by this band. Their newest album, Naa skrider natten sort, was just released and the anticipation was high and they delivered, bigtime!

Sometimes is does not do a band justice to open the album with a song that is thirteen minutes long. In this case it paid off. “Naar taaken tetner” is an epic black metal track that really sets the mood for the whole album. The atmosphere created is cold and dark, the perfect setting for black metal. My initial fear was that a song that long was that if overlong, a listener would not venture on to the rest of the album. However after first listen, the track proved to be the perfect opener. “Kronet av en væpnet haand” follows and actually gets the album moving with its approach. The clean chants provide more atmosphere to the song as well as some atmosphere. However, the song itself is uncompromising black metal with a cold and grim atmosphere that is essential to great black metal. The title track rounds out the opening trio of tracks and is another long epic song that does an incredible job at transforming the listener on a journey to lands cold and foreboding. There is even some keys hovering to for more atmosphere.

As we move through the album the landscape does not change much. What I think sets this band apart is their attention to atmosphere without compromising the music. They do not rely on blasting their way through songs. Instead they use a much more musical approach and the tremolos drive the songs while providing some excellent melodies. “I daudens dimme natt” is one of those songs. Another epic approaching ten minutes this track has some killer riffing on it and is one of the best songs on the album. Again, no blasts needed here because the slower tempo actually is more effective. The acoustic section adds atmosphere and some more melodies. This band knows how to do the black metal melodies that hook you in and they are present here as on the album closer, “Her visner hver en krans.” The chants on this track are nothing short of haunting.

This band has been one of my favorites since first hearing them almost a decade ago. DEJVEL usually isn’t the first name that rolls off the tongue for some when asked about great black metal bands. Naa skrider natten sort should be the album to change that!