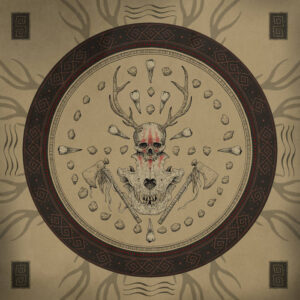 Folk metal from the States can vary and encompass a lot of styles. One of the original American folk metal bands was PANOPTICON from Kentucky and while they are legends of the genre, their lyrical approach was a bit more modern and it wasn’t until recently I discovered folk metal bands from America that reached into the past, to a time when another people populated this land. NECHOCHWEN was the band that let me know that there were great folk metal bands from this side of the pond that deal with the ancient lore of this land. I also recently discovered BLACKBRAID, another pagan/folk metal project from the Adirondack Mountains, New York and their debut, Blackbraid I.

I’d like to say that this is really a one man project by Sgah’gahsowáh (pronounced SKA-Gah-SoW-Ah) and little else is known about this artist. What I do get is some fierce melodic black metal mixed with some amazing, and sometimes mesmerizing Native American folk elements. “The River of Time Flows Through Me” kicks this off in a huge way. This is an epic melodic black metal song. Blazing right through you is some serious blasts and killer riffs. It slows down to a cool melodic part in the middle only to come back with more of those riffs. Immediately following that is “As the Creek Flows Softly By” is all acoustic guitars and flute. This can actually take you away and is really nicely done. Sometimes musical interludes can take away from an album but this is an album that each part, each song is essential to the magic that is this album. “Sacandaga” picks it back up again in an epic way. This was the track released and is the first song I heard from this album and is what drew me to this album with that combination of the melodic black metal with that Native American flute. Goosebump moment.

I guess my only real gripe about the album is it’s length. At only thirty six and half minutes or so, an album with songs this epic I like to be at lead forty five to fifty minutes.  With to of the tracks instrumentals we have just four tracks that are the bulk of this album. I think it’s the quality of the music that made me want more of it. Personal preference aside, he makes very good use of the time here. “Barefoot Ghost Dance on Bloodsoaked Soil” is an absolute crusher and the ten minute closer, “Prying Open the Jaws of Eternity” is an absolute beast of a song. The acoustic “Warm Wind Whispering Softly Through Hemlock at Dusk” sets us up for the closer with the atmosphere created. But then the song kicks in and it begins slower with some almost doom riffs and deep guttural growls until the three minute mark then it kicks in a little faster. The song builds as it moves through and as we progress the tempo is faster before going back to the slower, more atmospheric riffing. 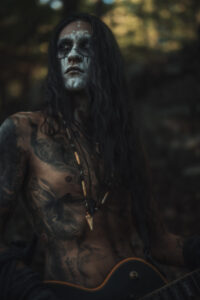 Line Up
Sgah’gahsowáh – Everything

Track Listing:
1. The River of Time Flows Through Me
2. As the Creek Flows Softly By
3. Sacandaga
4. Barefoot Ghost Dance on Bloodsoaked Soil
5. Warm Wind Whispering Softly Through Hemlock at Dusk
6. Prying Open the Jaws of Eternity