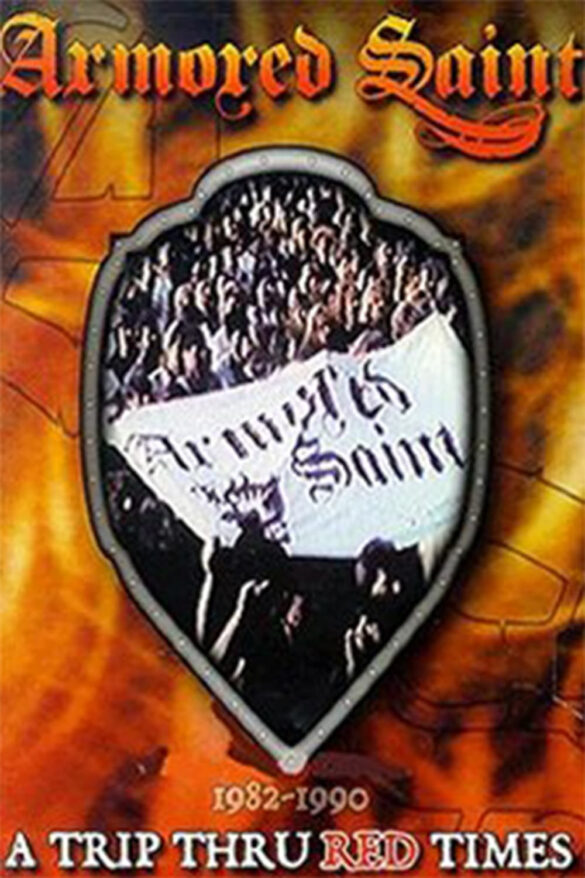 Armored Saint has been in the news a bit lately with news of a new documentary film about the band, and a successful opening slot on W.A.S.P’s return to North America tour. As part of our quest to review every Metal DVD, this is a good time to review the two previous Armored Saint DVD’s, A TRIP THRU RED TIMES (2003) and LESSONS NOT WELL LEARNED (2004). Feel free to read both of these reviews!

Originally this was released only on VHS way back in 1991. This DVD has a cool title but a terrible album cover consisting of a blurry photo of a crowd. They could have used that chance to change it but kept the original.

To make this DVD worthwhile the band added quite a few bonus features. The main one is a section of six videos; four live videos and the two video singles from THE SYMBOL OF SALVATION, namely ‘Last Train Home’ and ‘Reign Of Fire’.

They also included a cool and casual interview from 2002. The band was sitting around a recording studio and just chatted for an hour, and answering questions from fans, laughing, joking and showing off memorabilia. The production value was good as they had various images to accent the interview. I’m curious about the source of this interview because in the credits on the DVD it says watch for a new Armored Saint album in 2004! The next album, LA RAZA didn’t appear until 2010 so were the band in an aborted recording session or did they just choose a studio as the location for the interview? Either way the interview is very revealing and interesting!

There is also a photo gallery and discography and an amusing animated menu. There is also a little paper insert as well so in terms of added value for the reissue of the original VHS, there is at least two hours of extra material. Totally worth it!

As for the main, original feature it runs just under an hour and is a series of 11 videos spanning the band’s first decade or so. The videos are interspersed with clips of the band hanging out, fooling around and introducing the clips. They look so young and have so much hair! The clips range from the full budget production video for ‘Can You Deliver’ to some pretty crappy handheld bootleg, fan-filmed videos. From Dave Prichard’s living room in front of 22 people to Billy Barry’s Roller Rink in California in front of 220 people to the Dynamo Festival in Eindhoven, Holland in front of 22,000 people… it’s all here. Much of the commentary is about the deceased guitarist Dave Prichard including a clip from his last show ever.

A TRIP THRU RED TIMES is a great look at the first decade of this respected and admired band.