17 Crash are an Italian rock band who released their fourth LP ‘Stamina’ on November 18th, 2022 through Rockshots Records. It is a far more complicated and profound effort than their prior releases, that was fully composed during the never ending lockdowns because of the 2020 pandemic. The members have a love of 80s glam music and heavy rock and roll, and have the mentality that mankind must always fight and resist. They are recommended for fans of H.E.A.T, Crazy Lixx, Hardline, and Stryper, and they will be performing gigs to support their LP shortly. They will be very exciting, as the band love to see people dancing and having fun!

The album begins with what could be a The Shadows instrumental in a different dimension. Ok, a woman sometimes going ‘ahhhhh’ stops it from being a true instrumental but if there’s a word that describes ‘near instrumental music’ I don’t know it. The way it leads into the much heavier, faster and exciting, yet still feel good rocker ‘Higher’ and completely takes the listener by surprise is very well done. Pretty epic. The riffs are near first rate if fairly standard in terms of note choices and rhythms (though there are some neat syncopations), and the power metal singing is passionate but not aggressive (one might call them ‘feel good’). ‘My World’ has some Children of Bodom style guitar harmonies without the frontman screaming his head off, and ‘Soul’s uptempo guitar parts sound like Sammy Hagar era Van Halen!

Track ‘Keep Yourself Alive’ doesn’t work as if you crash 17 times, you’d most likely die, right? But that’s a minor criticism, or perhaps even a nonsensical one. Sorry. Good song though, if a little ploddy. The saxophone solo really fits the music well. Would a sax solo fit Iron Maiden, for example? Probably not. I think that shows that Crash have an unusual soulfulness to them. Speaking of Maiden, track ‘In My Dreams’ sounds a bit like their spooky ‘Afraid to Shoot Strangers’ in places. Pure coincidence! ‘Brand New Way’ has some Jimi Hendrix style rhythm guitar parts that soon morph into more typical power chords and chugs. The vocals on the other hand never have a blues rock feel to them, they’re very much in the style heard in the rest of the album. A nice mix, or a missed opportunity to sing in a refreshing genre? Maybe the latter. ‘Danger Zone’ has yet another a feel good vibe. I’m often strongly reminded of ‘Any Way You Want It’ by Journey, but there are heavier moments, with DZ.

In conclusion, this is pretty high quality heavy rock music filled with expert musicianship, great choruses, great verses too, and more or less constant greatness, in fact. Or at least goodness, anyway. There are some moments that are a little too cliched and simplified to be called ‘great’, but the album is never boring. The faster songs are certainly not dull. Maybe I have simple tastes, but if the slower songs were sped up a fair bit, I’d probably like them a lot more. The slower songs have a bit of a later Hammerfall feel, so if you like European metal, you’ll probably really enjoy this album. The faster songs on the other hand, remind one of Power Quest, but the drumming isn’t so intense with Crash and you don’t really get speed picking (apart from in the solos). The guitar leads are often flashy but not too flashy. Think later Iron Maiden, but with a more controlled and strict delivery. Or Gus G. The sense of excitement created in the beginning sadly doesn’t get matched as often as I’d like, but on the whole, a very solid release! 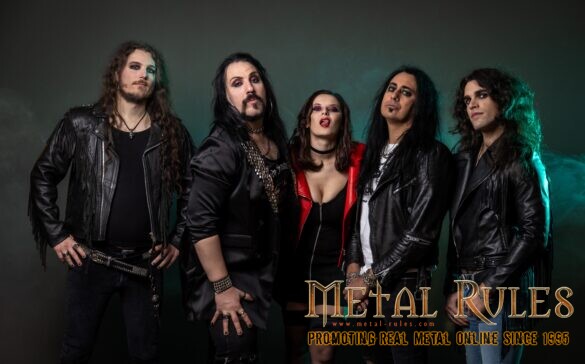