BLOODSTOCK is renowned for being for the fans, by the fans. HQ listens hard all year round to which bands BLOODSTOCKers want to see at the festival, so this announcement is sure to be a crowd pleaser, adding two of the most heavily requested acts as a new main stage headliner and as a special guest. If that seals the deal for ordering your tickets, don’t forget the ticket deposit scheme has now launched, letting you spread payment over six instalments. Without further ado…

BLOODSTOCK’s Saturday night Ronnie James Dio main stage headliner will be the most excellent, Swedish tech metal legends MESHUGGAH; their very first time headlining the festival. If you’ve never caught them live before, you are in for a treat. Come and see why they are so respected! The band’s most recent album ‘Immutable’ landed earlier this year, spawning the epic video for ‘I Am That Thirst’, which you can check out here.

Secondly, the revered German power metallers HELLOWEEN, swoop into Sunday’s main stage special guest spot. Check out their video for ‘Best Time’ – taken from last year’s self-titled album – which features a guest appearance from Arch Enemy’s Alissa White-Gluz. Markus Grosskopf, bass player & founding member of HELLOWEEN, can’t wait and explains why… “Playing the UK is always something special for us. Back in 1989, the energy and dedication of the British fans was the decisive reason for us to record our first live album ‘Live in the UK’ there, instead of any other country in the world. Our headlining shows in May 2022 once more proved why the UK is the cradle of metal!”

You can also now sign up for the very popular ticket Deposit Scheme! With payments spread across 6 monthly instalments, it makes it more manageable to pay for your weekend ticket. An initial payment of £34.50 is due upon sign up (which you can do at any time before 21st Feb), then five additional payments of £27.50 will debit your bank account on 28 Mar, 28 Apr, 29 May, 28 Jun, with a final instalment on 28 Jul. Sign up to the scheme here.

In case you missed it, the grass roots music-supporting METAL 2 THE MASSES 2023 programme has begun! If you’re a self-released or unsigned band, throw your hat in the ring to land a slot on BLOODSTOCK’s New Blood stage next August. Regions include MERSEYSIDE (Liverpool), BURNLEY, OXFORD, EAST ANGLIA (Norwich), NORTHANTS (Northampton), CHELTENHAM, BIRMINGHAM, CHESTERFIELD, NORTHERN IRELAND (Belfast), REPUBLIC OF IRELAND (Dublin), SHEFFIELD, HITCHIN, MANCHESTER, MILTON KEYNES, BOURNEMOUTH, LEEDS, NEWCASTLE UPON TYNE, ESSEX (Colchester), KENT (Gravesend), BRISTOL, NORTH WALES (Wrexham), LEICESTER, STOKE ON TRENT, SOUTH WALES (Cardiff), NOTTINGHAM, DEVON & CORNWALL (Saltash), SCOTLAND (heats locally, final in Edinburgh), and LONDON. Not only that, this year, BLOODSTOCK also welcomes back POLAND and NORWAY events and is thrilled to bring in the former Yugoslavia countries, which will be hosting inaugural heats in SLOVENIA, CROATIA, SERBIA and MACEDONIA. The final will be held at the Lomljenje Metalom Open Air event in Croatia. Full details of all venues and who to contact to enter in each region, can be found here or on Facebook. Heats kick off very soon – apply NOW so you don’t miss out!

BLOODSTOCK’s 2023 Ronnie James Dio main stage headliners are rounded out by none other than KILLSWITCH ENGAGE and MEGADETH. Also appearing are IN FLAMES, DEVILDRIVER, ANTHRAX, BIOHAZARD, SACRED REICH, HEAVEN SHALL BURN, SEPULTURA, WHITECHAPEL, FIT FOR AN AUTOPSY, CROWBAR, SEETHING AKIRA, UGLY KID JOE, DECAPITATED, GATECREEPER, ZEAL & ARDOR, KING 810, UNTO OTHERS, URNE, ALL HAIL THE YETI, DEAD LABEL, NONPOINT, CHURCH OF THE COSMIC SKULL, BROTHERS OF METAL, GUTALAX, UUHAI, INVISIONS, COBRA THE IMPALER, and TROLLFEST. Many more are yet to be announced.

With tickets selling faster than ever for 2023, all VIP packages and campervan passes are already sold out. Grab your weekend tickets now at the ticket store.

Get full festival information at bloodstock.uk.com. 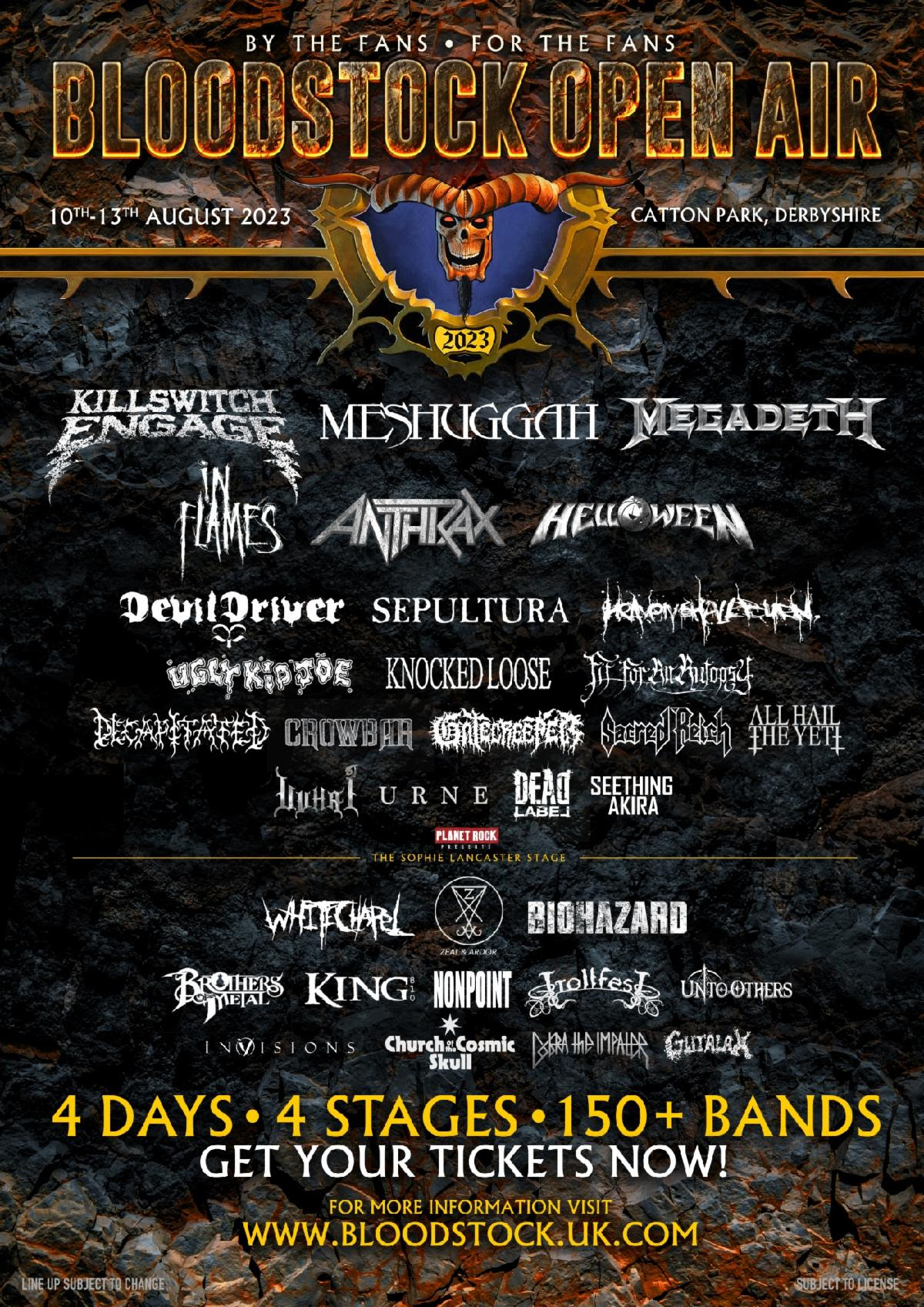 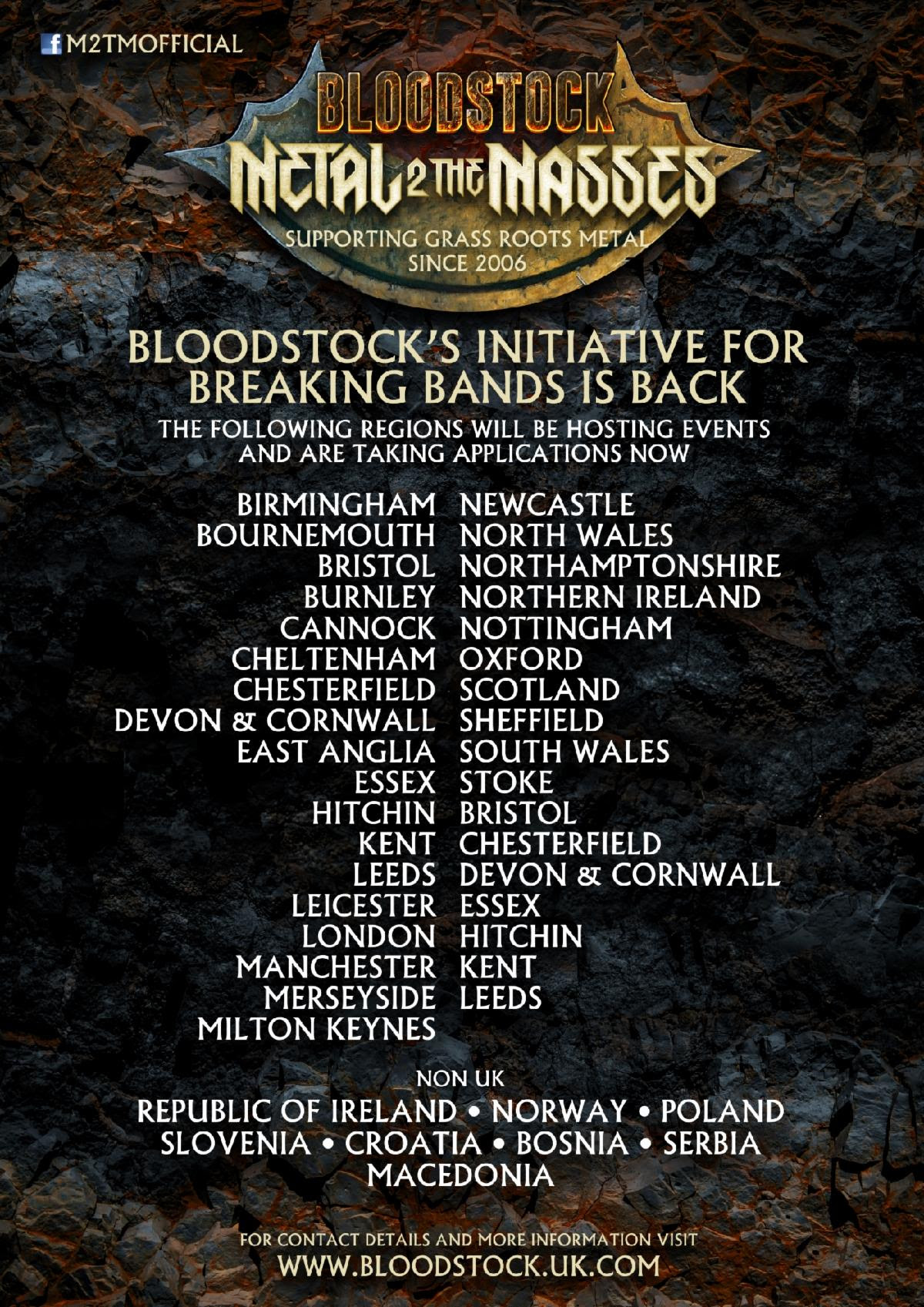