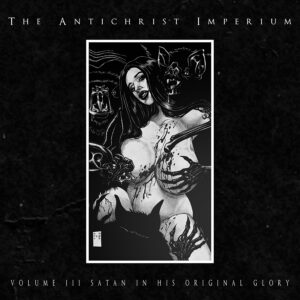 For a band like the English/Australian hybrid The Antichrist Imperium, the pandemic offered something of a glass half-full – or at least glass kinda full – proposition. With the lockdowns and lack of travel pretty much turning everyone into shut-ins for the better part of two years, it essentially simplified the logistics and provided creative downtime for this well-dispersed outfit.

Along with geographical challenges, the four Antichrist Imperium members are also involved with a host of other bands – Akercocke, Voices, Werewolves and The Berzerker among them. So the opportunity to craft and collaborate, albeit mostly virtually, on new Imperium material must have been a welcome opportunity, especially since the band’s last album, Volume II: Every Tongue Shall Praise Satan, was issued in 2018.

And given their expansive avant/goth/black/death metal sound, and penchant for ostentation, it’s the kind of stuff that demands some care and attention. The effort certainly pays off with Volume III: Satan In His Original Glory, which is even bigger and grander than its predecessor as the quartet move to put some more distance between themselves and Akercocke, whose 2012-2016 hiatus was central to The Antichrist Imperium’s formation in the first place.

Indeed, their self-titled 2015 debut was a collection of vintage Akercocke songs and rehearsal room scraps for what was in essence a sixth Akercocke album done under a different name. But Akercocke’s reformation and boldly titled 2017 comeback album Renaissance in Extremis pretty much put the onus on The Antichrist Imperium to branch out and stake a claim all their own if they were to continue, which indeed they have. With Volume III, it’s pretty much mission accomplished.

After a plaintive, melodramatic start, Volume III roars forth with the twisty, turny theatrics of “The Sweetest Juice,” which makes for a dramatic and epic opening statement at nearly eight minutes long, only to be followed by its more than nine-minute counterpart “The Vilest Beast.” Both bring a technical/progressive twist to their blackened metal fury with dive-bomb guitars and sudden tempo changes, though “Beast” is more deliberate and restrained at the outset until it too jets off.

The remaining six tracks average roughly six minutes per, so even though there is plenty of blast beat-powered velocity here, Volume III is more of a marathon than a sprint. But the material is densely packed with haunting melodies graced by ample – though sometimes cheesy – clean vocals, guttural death metal brutality, black metal sprints, careening riffs and turbulent rhythms. For comparison, the band sound a bit like Cradle Of Filth (minus the symphonics) crossed with vintage Opeth.

And for the most part it is worth the investment of 53 minutes of your time. “Exorcist Evisceration” flat out rips – even with its moody, clean verse midway through – as does the tech deathy “Chapel Of The Crippled Seed” and “Menage A Triumvirate.” “Tu Verus Mundi Lucifer,” on the other hand, channels Killing Joke with its industrial tinges and breathy, pop-like forays, while still delivering plenty of heaviness.

“Misotheist” revisits the band’s first demo from 2010, beefing things up considerably in the process before closing things out with its “We live through Satan, We breathe through Satan, We kill for Satan” mantra. Add a bestial, nearly pornographic cover illustration to the album’s already sacrilegious narrative and The Antichrist Imperium deliver a lurid, yet resonant package that not only lives up to its title, but sees the band take another big step in establishing their unique “brand,” to borrow an annoying marketing buzzword.