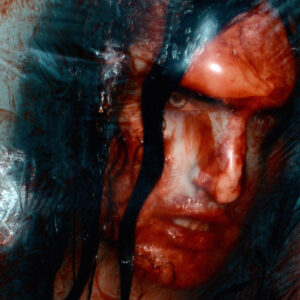 The promo material for GLDN’s new EP describe it as “daring and transgressive” and something that “cannot be put into a single musical category”. Having listened to it, and having also listened to late 90s Marilyn Manson, I’m not sure I’d entirely agree with that assessment.

Of course, Manson’s late 90s output was itself fairly distinct in sound, part of their whole appeal. But Manson-worship is Manson-worship, and that’s very much what this is. That’s also not a bad thing in and of itself, there are some solid works from that period. Not everything needs to be totally unique and unprecedented, and following in the footsteps of another can work when it’s done well.

With the title track, we go full-on Manson. That dark, industrial sound covered in grime and dirt, lots of anguished cries of inner emotional turmoil overloading the mic. “This Must be the Place” is where the punk side of that sound takes charge and comes to the fore, ramping up the pace and aggression, purposefully creepy lyrics and vocals over industrialised punk beats straight out of Antichrist Superstar or Holy Wood.

Sadly, First Blood comes across as more of a basic sound sampler than a proper release, even an EP. It provides a glimpse into the style Nicholas Golden is going for, but the tracks feel too short and under-cooked to really stick with you. If you have a particular itch for that turn-of-the-millennium industrial rock sound, this is certainly aiming there, but there are better things from that actual era you could be listening to instead.