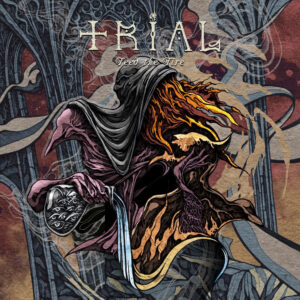 Sweden is on top of the NWOTHM heap with so many bands carrying the heavy metal flame forward for future generations. Bands like ENFORCER, SCREAMER, ATTIC, PORTRAIT, etc. burst onto the scene and created quite a buzz. ATTIC and PORTRAIT were highly influenced by KING DIAMOND and MERCYFUL FATE, as you can tell by their band names. TRIAL (SWE) is also one of those bands and, although they are also named after a KING DIAMOND song, their sound was more along the lines of European power metal with a touch of early USPM. After three albums with the band, original vocalist Linus Johansson was gone and former AIR RAID siren Arthur W. Andersson has stepped in and the result is a scorcher of an album titled Feed the Fire.

Guitarist Alexander Ellström stated that with the addition of Andersson he felt that he needed to take a different approach to the songwriting; going as far as scrapping all the songs he had in the can for this album and starting over fresh. He said he changed his approach due to the type of vocalist Andersson is so the inclusion of the new vocalist pretty much shaped this album and it was a chance that paid off in spades. The moment “Sulphery” hits your ear drums you will agree that this approach was the right answer. The typical album opener with all the power and intensity you would expect, and with Andersson’s melodic vocal approach you know right away that this album will be something special. Fast and melodic the riffs are infectious and the melodies are so catchy that this is slowly becoming one of my favorite releases this year. And just when you think you’ve recovered from the opener, “Thrice Great Path” follows it up with more riffs, more melodies, and incredible soloing. The vocals compliment the music to the point that if this was your first experience with the band you would think Andersson had always been their vocalist. Check out the chorus from “In The Highest” if you had any questions!

And it does not stop there. Each song on the album seems to come on stronger than the one before it. When the vocals are not providing the melodies, the guitars are. And there are some surprises on this album as well. Whilst headbanging to “Snare the Fowler” imagine my surprise when this notable bark comes through my speakers and I immediately recognized the distinct vocals of At The Gates frontman and metal legend Tomas “Tompa” Lindberg. Although not my favorite MDM vocalist, his inclusion did add another layer to the song and although this album can stand very well on it’s own, it was a nice surprise. But back to the melodies because they are huge drivers of this album. “Quadrivium” is loaded with killer melodies and shows Andersson hitting some of his most impressive notes. Then you have the massive “The Crystal See.” This is the album closer and an absolute banger of a song. Nine minutes and seventeen seconds of epic metal. This is not as fast as some of the song before it. But what it lacks in speed it makes up for in substance. Once again there is no shortage of killer riffs, soaring melodies, and killer soloing.

Once again I came across an album that completely caught me by surprise. I admit that before this album I was not very familiar with TRIAL (SWE), the country code officially added to the band name to set them apart from other bands with the same name, but with this album they truly created a new fan of the band. With their new vocalist taking their music to the next level I am already looking forward to where they go next. This is essential!