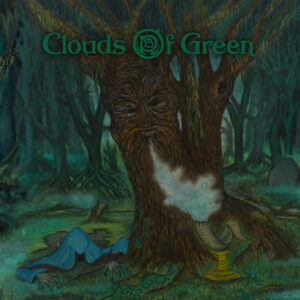 Lithuania’s rock/metal music scene is not yet widely known by the world but it definitely has some great bands that create quality content. One of them is power stoner band ORB, who formed back in 2011 and recently released their second full length studio album, “Clouds Of Green”. What started more like an after work activity became a strong beginner of stoner rock in the country. It’s been six years since their first release and band took this time to grow and improve while keeping their original vibe and energy.

Just like majority of the stoner genre bands, ORB also is not avoiding singing about ganja, partying and feeling high but does all that in more energetic ways that you would expect. After just the first glance at the album cover you could expect to be invited to magical journey through the woods, filled with wizards, witches and, of course – bongs.

The album begins with the mysterious drums and a slow, sludgy riffs of the title song and are followed by roaring vocals. Not long after, the tempo changes making it clear that it is for sure power stoner. A second song, ‘Witch”, is keeping a slower tempo again, but is filled heavy riffs, roaring vocals and some strong back vocals. Also, ORB perfectly includes an instrument that I have probably never heard in such music before – harmonica. It definitely sounds unique, interesting and adds character.

As their third song starts, it feels like the mood is set up to a party: more energized riffs start to flow, and there are more guitar solos with changing rhythms which makes this album more interesting to listen to. Following that, the band has few more songs that carry on with that up-beat tempo they set up previously and a song asks a question that might be familiar to a lot of people who find themselves wrapped up in stoner lifestyle – “How wasted are you?”.

As for their final song, “Dear Satan”, ORB is back with their roaring vocals, slow riffs and solos and a 55 minutes journey is about to be finished. They show that stoner does not necessarily need to be chill, relaxing and only have long guitar solos lasting several minutes. They have shown that stoner is a great music to get a bit crazy and party.