Creepy Willie are a macabre and theatrical progressive metal band from Romania who formed in 2019. They have released three singles earlier this year, and they self-released their debut full length album ‘The Creepy Willie Show’ on June 11th, 2022. It is based on the story of a disturbing circus, with horrifying performances and exhibits. Every song represents a different circus act and appeals to the weaknesses of mankind, such as a fascination for gruesomeness. The LP is intended to be listened from start to finish in one go and it features a wide range of genres from blues, to stoner rock, to death metal.

The acting from the circus master you get in the start of every track really is good, I have to say. I’m no Johnny Depp and all I really know about him is that he doesn’t get on with his ex wife, so it would be pretentious to criticise any theatrical performances, but I couldn’t find any flaws with it. I wouldn’t say it was DISTURBING and I doubt it was for the band (unless they need to man up a little), rather it comes across as larger than life and a but silly. (But in a fun way). Fittingly, some of the ‘death metal’ these guys play in first song ‘Zomberman’ has to be some of the least scary I’ve ever heard. Again, it’s more on the lighthearted and fun side and isn’t particularly speedy for the most part. The production is thick and heavy at least, but to make a hugely exaggerated analogy, would a one ton teddy bear be scary? Hopefully not. The rhythms aren’t crazy, but you get more than the standard 4/4, and the harmonies and melodies are a mixture of semi-aggressive and Danny Elfman inspired. The singing is very OTT and entertaining.

The second song’s a massive contrast, in that it has clean, chilled and bluesy guitar playing in the style of Jimi Hendrix. Death metal to blues rock in an instant? Hm. It certainly needs some adjusting to. Fortunately the pounding, mid-paced and super heavy guitars are back after about one and a half minutes, creating some much needed consistency. A nice idea. The Hendrix ideas soon return with a classic sounding solo over the crushing chords. An interesting combination Jimi never explored, anyway. The Danny Elfman ideas are gone, but you do get some chords that aren’t expected. Song three has an interesting start. It goes ‘MAKE ROOM FOR THE BABIES!’ then you get simple ultra heavy power chords in the style of Bolt Thrower. But of course it’s heavy, the song is about CANNIBAL babies. Very scary. After such parts, doomy Candlemass riffs arrive, which are followed by more colourful, overdriven doom harmonies in the style of Dolorian. The instruments may be serious, but the vocals keep things (relatively) light. And if you love power, don’t worry because it comes back soon enough. The song ends with some eerie clean guitars, but again the shift may be a bit too extreme for some.

‘La Llorona’ starts with some more dark but far from heavy blues, then in come the groove metal riffs in the style of Pantera. Everyone loves Pantera, right? Well sadly, Creepy Willie could have made such ideas their own more at times. Having said that, they do get some doom metal and prog twists, sometimes with hints of Dream Theater. Certainly not them at their most complex, think some of the stuff of their later albums. ‘Hack Slash Rebirth’ has many traits of the prior song, but it does have some faster, more thrashy sections. For a band influenced by death metal, most of their speeds are rather moderate, which may disappoint. ’Gypsy and The Brain’ starts off clean and relaxed, yet creepy. I’m reminded of ‘Oil’, again by Candlemass. Then the guitars turn filthy once more, whilst playing a developed version of the ‘nicer’ section. More groove metal ideas get explored. The singing in the last section of the track is a little darker than prior. Frequently changing musical influences is all well and good, but changing the main theme of the album – the silliness – is a little stranger, and wasn’t for me quite so much. But that’s a nitpick. Whilst faster than most others at times, final track ‘Mercurial Reflections’ isn’t much of a climax, it being rather similar to the preceding songs in their more standard moments. Having said that, there are frequent tasty fills that are addictive.

In conclusion, the circus themed introductions of the songs were far more effective than I was expecting. They gave me the expectation that the following whole band parts would be taken just as seriously and thankfully I wasn’t wrong. I don’t think your everyday death metal fan will get much out of this, as not only are the tempos mostly very mild, but the tone is far from truly dark. As hinted at earlier, if Creepy Willie think they are hardcore, they will get a shock when they hear acts such as Cannibal Corpse. In fact, they’d probably stop calling themselves ‘death metal’ and refer to themselves simply as ‘prog’. And even then, for prog music, things aren’t too proggy, here. In terms of complexity, think Threshold, rather than Symphony X. It’s a shame the Elfman sounds were very limited, as power chord abuse in more experimental music can get tiring. Get this music if you’re not a serious person, but avoid if you like wearing corpse paint! 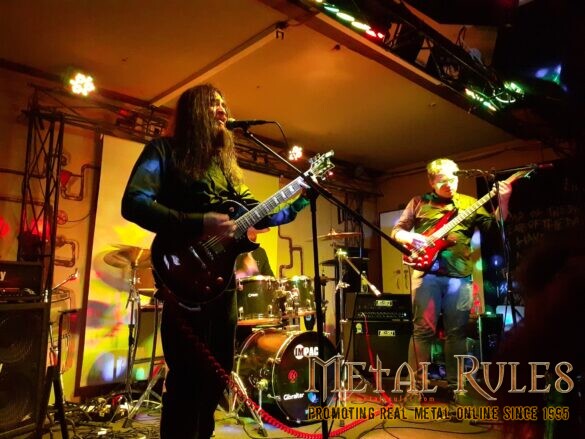