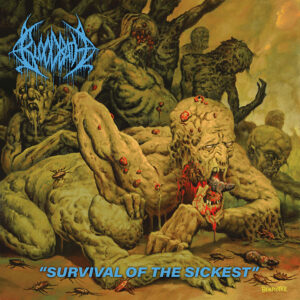 The long-standing, ever-mutating old-school death metal supergroup Bloodbath has seemingly found a bit of stability since Paradise Lost frontman “Old Nick” Holmes joined the fold for 2014’s Grand Morbid Funeral. Survival of the Sickest is the third album with him behind the mic, allowing the group – anchored by lone constants Jonas Renkse and Anders Nyström of Katatonia – to hone their sound and presentation moreso than on their first three albums, where Opeth’s Mikael Åkerfeld and Hypocrisy’s Peter Tägtgren traded the frontman slot from one to the other and back.

During Holmes’ tenure, Bloodbath have opened the aperture a bit on their vintage Swe-deathy rabble. Funeral saw Holmes return to the burly, growling vocal stylings he hadn’t employed for years with Paradise Lost, making the buzz-sawing soundscape all the more massive. 2018’s The Arrow Of Satan Is Drawn dialed up the intensity and added black metal flourishes to smooth over some of the music’s trademark grit.

With Survival Of The Sickest, Bloodbath take their ‘til now very Northern European-flavored homage on a trip to Florida to visit the ghosts of Massacre/Death/Obituary/Autopsy/Morbid Angel/Cannibal Corpse past. The songs and sound here are beefier and less ragged, loaded with chug-and-churn dynamics, and revel in garish, gory tropes with more obvious glee on the likes of “Zombie Inferno,” “Putrefying Corpse” “Malignant Maggot Therapy,” “Carved” and “Tales of Melting Flesh,” with a few excursions into Deicide-style sacrilege on “No God Before Me,” “Born Infernal” and “Dead Parade,” with its “Your god eternal fiction” mantra.

With COVID providing loads of time and inspiration, the apocalypse figures first and foremost on Sickest – as could easily be surmised by Wes Benscoter’s pustulant “rotted body landslide,” to borrow from Cannibal Corpse, cover art – and the pummeling first single/opening track “Zombie Inferno.” “Affliction of Extinction” is very much the album’s theme song. And in a world where all hope is gone, “The one and only thing left for me is, To Die!” as Holmes bellows over the Obituary-inspired chunkiness of “To Die,” as ex-Morgoth frontman Mark Grewe joins in to provide some John Tardy-like emphatic wails. Napalm Death’s Barney Greenway and Luc Lemay of Gorguts lend a hand elsewhere.

Indeed, the pandemic seems to have given Bloodbath the keen-eyed focus and intent with Sickest that they perhaps hadn’t quite been able to muster up in the past given the other commitments of each of the band members. But with no shows to play, and everyone pretty much working from home like everybody else, other distractions were more easily managed – even if refusing to get vaxxed seems to have cost drummer Martin Axenrot his day job with Opeth. And with the quintet on the same page, they slay like never before here – even with guitarist Tomas ‘Plytet’ Åkvik of Lik coming onboard along the way – while avoiding sounding like mere mimics, a la Gruesome and their admitted, yet adamant, Death worship.

After running mostly balls out, save for “Dead Parade’s” martial trudge, Sickest closes out with the majestic “No God Before Me,” which recalls Morbid Angel’s “Where The Slime Lives” with its doomy plod and opulent flair thanks to its funereal, choir-like backing vocals. It’s a truly grand finale to what was already a pretty impressive effort that certainly bucks the usual law of diminishing returns – especially for supergroups/novelty acts that generally don’t have anywhere near this sort of staying power.