Review and photography by Graham Hilling

It’s a swelteringly hot evening in London and a queue has already formed outside the Boston Music Room as I arrive for Bloodywood’s second UK outing following a handful of gigs in 2019. It’s a sold out show too.

There is a definite air of anticipation surrounding this performance which you can almost taste inside the venue. Everyone is pumped up and ready to go! And when members of Bloodywood wander amongst the crowd handing out chapatis (or naan breads, not sure which!) it only helps to blur the division between band and crowd and makes the evening even more special, let’s be honest you don’t get this at most gigs!

Opening tonight and warming the crowd up (if that were really required given the heat outside) is Lake Malice from Brighton, on the UK’s south coast.

The band is comprised of guitar, vocals and drums and they make use of playback to fill the sound in and make up for the lack of bass.

I’m not so keen on playback to be honest, except where something is difficult to replicate in a live setup. It’s a shame there is no bass player to complete the line-up, this would definitely fill out the sound and keep chumps like me happier!

No matter though, Lake Malice have some pretty impressive songs and the sweaty Boston Music Room is the perfect place to showcase them in front of a very active audience desperate to hear some new music.

Singer Alice barely stops moving for the whole set, some feat considering the temperature and guitarist Blake isn’t far behind on the activity front. The music and drums are very punctuated, with lots of light and shade to carry the interest.

Standout track “Creepers” just drips malevolence. Set closer “Blossom” is also another standout track and show the versatility of the band quite nicely. One to watch I think…..

So, after a brief break and some re-organisation of the stage and clearing of spilt water it is time for the main event, Bloodywood. Having their roots in a parody band, you’d be forgiven for not setting expectations too high, but how wrong you would be. Hailing from India and now writing their own songs following the positive reaction to their early videos, they now focus on a variety of serious topics, ranging from mental health, bullying, politics etc. And they also back this up with supporting various organisations, much respect.

The intro tape has some typically Indian background music and Sarthak Pahwa on dhol (a double headed drum) walks onto the stage to some applause which he pauses by placing a finger to his lips. Seconds later, he is starting the set in fine style with some impressive drumming!

Soon the rest of the band arrive and immediately the small stage is filled with energy (and people!). Starting with “Gaddaar” (Traitor) from the debut album Rakshak you can see how this evening is going to play out. The crowd laps it up. It’s an interesting melding of styles, which, on paper, shouldn’t really work at all (bit like banana and onion!) but, amazingly, Bloodywood have managed to make something magic happen!

The bludgeoning guitar of Karan Katiyar, mixed with the traditional samples creates a musical canvas that is both super heavy and infectious in equal proportions. The songs are well written with big hooks and the dual vocal attack of Jayant Bhadul & Raoul Kerr is perfect. 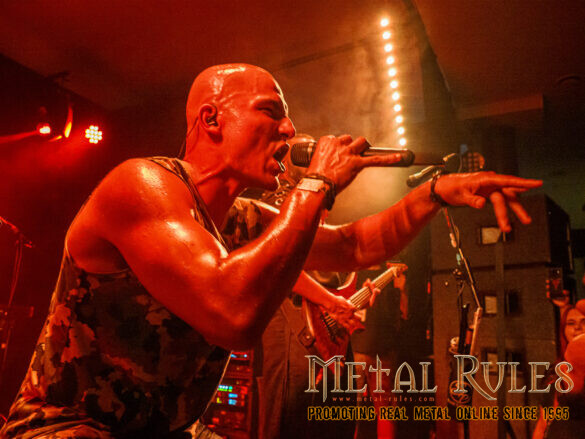 “BSDK.exe” slows things down a little and allows us some space to breath in the very hot air in the venue. Everyone is already sweating profusely by this point. “Aaj” (Today) continues in the same vein with some flute trills and blending of the more traditional folky elements into the maelstrom.

“Dana Dan” (Give a Beatdown) has everyone moving, the furious vocals leaving me breathless. “Machi Bhasad” (Expect a Riot) is a crowd favourite and another track that manages this weird musical fusion perfectly. Many of the songs are introduced with a small talk, setting the scene and theme. “Jee Veerey” (Live, Brave One) has some more flute work from Karan Katiyar (who is the main man behind the band, multi instrumentalist and composer).

Jayant Bhadula thanks everyone involved with the tour (which is independently organised and that takes some doing) and introduces the band and thanks the audience. Everything drips sincerity and you have to admire what this band have achieved in such a short time.

“Ari Ari” sees the shortish set brought to a close. This is the song that saw Bloodywood get their initial exposure, a cover of the Bombay Rockers song (which in turn was also a cover of a traditional Indian folk song). The punters eagerly embrace this and the members of Bloodywood leave the stage while playing to mingle amongst the crowd, clearly loving the experience of playing to an adoring crowd.

They’re back for an encore of “Gaddaar” (Traitor) and by this time the venue is dripping with sweat from the energy coming form the stage and the super hot weather outside. As I leave it feels like I have literally taken a shower with my clothes on! I cannot think of a better venue to have seen this band in to be honest, up close and personal. Bloodywood are the real deal, you better believe it! 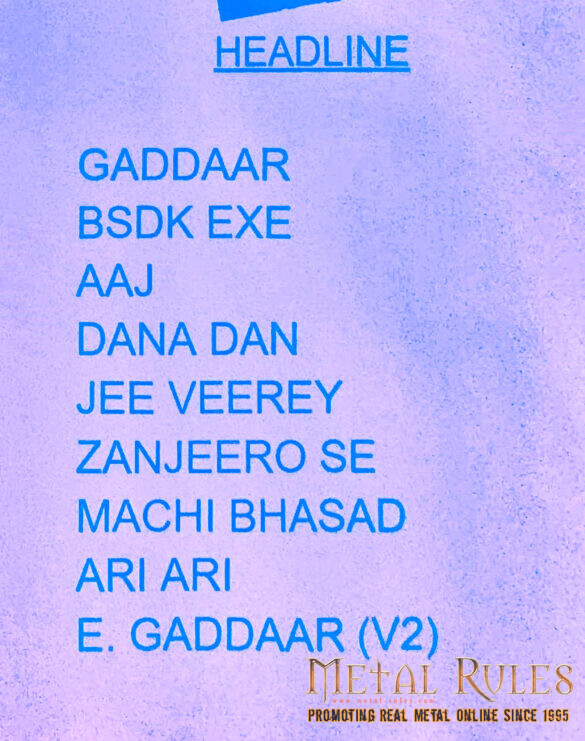