With their six full-length, PADDY AND THE RATS serve a top-notch pirate party fuelled by a heavy dose of Punk, Polka and Folk, turning the world into a giant pub! This Irish influenced sound will assuredly bring up the urge to slam down a cold one while swinging happily along arm in arm to the beat! Formed in 2008 by singer and songwriter Paddy, the untamed unit have built a respective name within the scene due to hard work and extensive touring all over Europe – with more than 400 shows including at the world famous Wacken Open Air and the Sziget Festival. For the new album, they teamed up once again with producer Zoli Baker. The artwork was designed by Jill Colbert, who has also worked with bands like Alestorm, Exodus and Wintersun.

Hi Paddy And The Rats, thank you for your time. Please could you introduce yourself.

You’re a well-established band forming in 2008, what drives you to keep going for so long in the music industry?

That’s what we love. It is a very good thing if you can earn your money with the thing you love. Also, we have a lot of fans. They and the good gigs keep us playing.

How would you describe your music to someone who has never heard it before?

It is not an easy question. We started as an Irish punk band, but so many things influenced us, so recently I can say that we have our own Paddy-style. A kind of punk rock mixed with folk and melodic rock, even some modern electric music.

When did you first start getting into music and know you wanted to join a band? Is it what you expected it to be like?

When I was 13 I saw the AC/DC movie ‘Let There Be Rock’. That’s when I decided to be a rock guitar player. It was a long way, lot of efforts and investments, but I’m happy because I know that only a few musicians can be successful enough to play in front of thousands of people.

You’ve just released your 6th album, ‘From Wasteland to Wonderland’, what sets this album apart from your previous releases?

This is the most mature album we’ve released, so far. We spent a lot of time with writing the songs and making demos. There’s a good variety of different styles, folk, punk, rock, metal, even mariachi music.

What has been the best part about writing this new album and have there been any funny moments you could share?

We made some sessions in smaller groups of 2-3 people then we were sending the demos to all of us. For me the funniest moment was when we went to our singer’s holiday house at Lake Balaton to start to write ‘Heartbreaker’. We met (Paddy, Joey and Lewis – new keyboard player) and we had a lunch at a perfect Italian restaurant, we drank some beers. So we got a little bit drunk and tired and we went to bed for some hours. We woke up in the evening then we started to write the song, we were still a bit drunk but it was ready by dawn.

The artwork on the album cover of ‘From Wasteland to Wonderland’ has been done incredibly well by the talented Jill Colbert. How did this collaboration come to be?

Our label company, Napalm Records, recommended her and she did a very nice job, we are absolutely satisfied with her.

The music video for ‘Party Like A Pirate’ was shot in Tenerife. Why was this the location you chose?

We wanted a tropical seaside area for 2 videos (Party Like A Pirate and Matadora), and at that time of the year (March) when we had to shoot the videos, Tenerife seemed to be the best option. Paddy and me also visited the island previously, so we knew the most beautiful spots there.

How are you feeling now that the album has been released? Did it get the reaction you expected?

It is not easy to get correct opinions. Your friends and family always say: Oh! This is fantastic! 😊 And obviously there are people who are never satisfied with anything you do. On the other hand, you can never expect only positive reaction. The old fans don’t like any change, they want to hear exactly the same shit you did 14 years ago. But for us it would be very boring to copy ourselves from time to time. I try to not take it too seriously. Of course, everybody prefers good reactions. I think most people who listen to our music really like it, and it’s all that matters. So, I respect those who don’t but ignore them.

How important do you believe it is for a band to be signed to a label to be recognised in today’s society?

There was a time when we released our own albums. Then came Napalm and we made this agreement. We tried to consider the facts, what the extra things could be that they can provide. Many times smaller record labels don’t really provide any special additional value to the product. They‘re just creaming the profit. On the other hand, it means a value when you’re signed by a well-known company. It is like a recommendation.

It is over 600, I think, haha! We have never been in America, neither the US, nor South-America. We know from the statistics that we have a lot of fans there. So it would be a good thing to play there. The only problem is the transportation and accommodation costs that makes it impossible at the moment.

There are places I liked very much and I’d be happy to go back to. For instance, I love the countryside France. We played at a festival near Bordeaux. We stayed at a manson in the middle of a wine-growing region. It was beautiful, and the people were so friendly. Or we played at Wacken Festival that was the biggest rock event we played at. It would be amazing to play there again. I miss Italy, too. Likewise Spain, Poland. It is impossible to mention all of them.

The music industry is ever changing and now even more with Covid-19. How has everything changed for yourselves and the music scene around you?

It was a shock. Like a nightmare. We played an average 50-60 gigs per year then came Covid and we only had 15-20 gigs for 2 consecutive years. All foreign performances were cancelled. We were a live band having no live performances….It is a little bit better now, but far from the previous good years. The only good thing out of the bad is that I could spend more time with my family, my little daughter. Also, we had to make money in other ways, that was a financial pressure on everybody.

Are there any artists/band or albums you have heard recently that have caught your ear?

Beast In Black. I was growing up with the melodic rock and hair metal bands of the 80’s, so I was happy to hear them who took the original recipe and made it up-to-date. Maybe, as I get older, I’m more opened to different genres than before. I don’t care if it is a metal band or Cuban music, if it is good, it is okay.

Do you have any hobbies outside of music that most people don’t know about?

What would be your dream line up at a gig?

Unfortunately, some of my favourites are already dead. Like Prince. He was one of my heroes. My dream line up..?

Thank you for your time and do you have anything you would like to say to our readers?

Be open minded and kind to others! 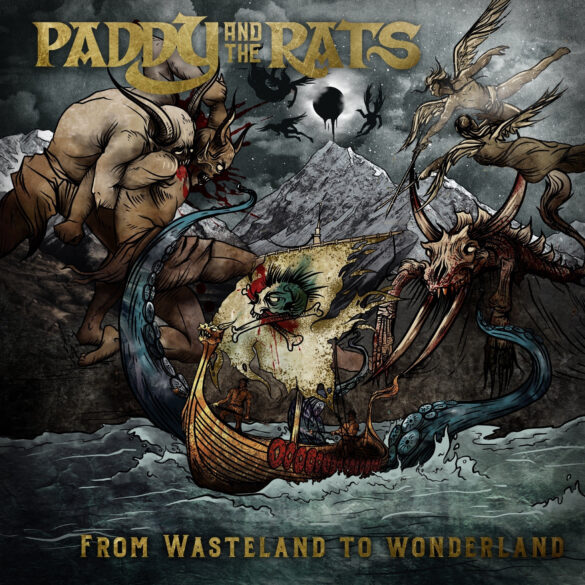 Paddy and the Rats are:

Find Paddy and the Rats online: