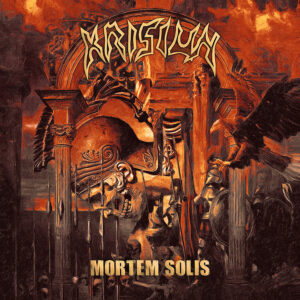 After 11 albums, you should pretty much know what to expect from Brazilian trio Krisiun: gnashing, full-throttle death metal with few frills but plenty of brutality. Mortem Solis, the band’s 12th album, which translates as “death of the sun,” doesn’t disappoint. It’s as savage an effort as these guys – brothers Alex Camargo (bass/vocals), Max Kolesne (drums) and Moyses Kolesne (guitars) – have done and show they haven’t lost any intensity after 30-plus years in the game.

Powered by Max Kolesne’s martial, rat-a-tat snare drum battery, the trio sound like an army on the march from the outset with “Sworn Enemies” and rarely relent. And when they do, it’s not for very long. There’s the Eastern-tinged 90-second intro “Dawn Sun Carnage” that gives way to the utterly furious, at times black metally, “Temple of the Abattoir.” “Swords Into Flesh” adds hints of South American swing into its otherwise flame-throwing delivery, while “Necronomical” rides a mid-tempo groove and the closer “Worm God” teases more of a slow grind to start before both blast off.

Otherwise, it’s pretty much all-ahead full, as on the tornadic “As Angels Burn” that Strapping Young Lad/Tenet guitarist Jed Simon contributed to, the blunt force “War Blood Hammer” and the rivet-gun pummel of “Tomb of the Nameless.”

After working almost exclusively with producer Andy Classen in Germany since 2006’s Assassination, the band stayed close to home for Mortem Solis, recording everything in São Paulo before shipping it off to death metal veteran Mark (Beneath The Massacre, Kataklysm, Deicide, etc.) Lewis in the states for the final mix. The results speak for themselves. Never what you might consider a “slick” band, Krisiun sound especially raw and primal here, which fits the aggression and velocity they put into the music and its delivery perfectly, and drives it home with that much more authority.

Given their steadfast dedication to “real death metal,” Krisiun haven’t changed their approach a hell of a lot over 30-plus years, and one album often tends to sound like the next. But every so often, they bring a little extra to the table and come up with something special, like 2008’s Southern Storm or Conquerors of Armageddon, which gained the band worldwide attention in 2000 and is a genuine classic. You can add Mortem Solis to that list.