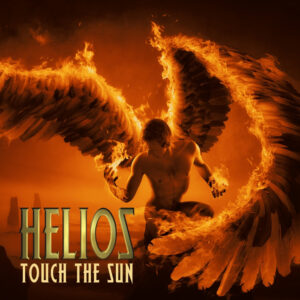 The Pittsburgh metal scene is loaded with great bands, some known and others not so well known. HELIOS is a name that has recently sprung up and are making some waves in the metal community. Starting as STORM DRAGON they releases one EP before changing their name and grabbing vocalist Tim Aymar  who is the current vocalist in PHARAOH but is probably most well known for being the vocalist in Chuck Schuldiner’s prog-power band CONTROL DENIED. Aymar is no stranger to the Pittsburgh metal scene so his vocals mixed with some incredible guitar work and what you get is Touch the Sun, some top quality USPM that reminds me a lot of bands like CRESCENT SHIELD or ONWARD.

“Fire from the Sky” kicks this thing off and in a crushing way. This song is heavy with prog time signatures and heavy riffing. Aymar’s soaring vocals add more atmosphere being somewhat gruff but extremely melodic. The solos kick in and have a really nice tone and are extremely well done technically.  The title track follows it up with some more great riffage and an extremely catchy chorus. The solos in this song are godly and even though technically brilliant they’re more than wankery including some tasty dual leads. The opening trifecta ends with the powerful “Like A Gun.” This is a very personal ballad that’s actually well done. Ballads can go either way but here is all emotion and no cheese. The solo with the keys sounding like strings just hovering above for atmosphere takes the song to another level. This is the first of two well done ballads on this album…more about that in a bit.

One of the highlights of this album is the 70’s proto metal inspired “Mystery.” I think it’s because it took me by surprise because of the difference from some of the other more USPM sounding songs. It kicks in with a nice riff then the organ comes in and just rides along more like how BLUE OYSTER CULT used their keys. Aymar might have been channeling some old Coverdale on the chorus here. There is no other song like it on the album and the fact that it was the last thing I expected made it even better. The speed and crushing USPM songs still dominate this album. You have songs like the anthemic “Keep It True” or “Hellbender” with it’s powerful atmosphere and monster chorus to the absolutely sick solos that keep the album going all the way to the absolute shredding closer “Ancient One.” This is the perfect closer that slays from beginning to end with it’s blistering main riff. There’s this part in the middle and after the solo where the time changes with some really cool riffing.

This is a great album and a killer debut from HELIOS. You can tell these guys are seasoned musicians and with Aymar’s vocals sounding as good as ever is the cherry on the top. His vocals on last year’s PHAROAH album and now this album shows he is on fire. The rest of the band are top notch as well and the songwriting here is brilliant. With a debut this strong this band could truly touch the sun. 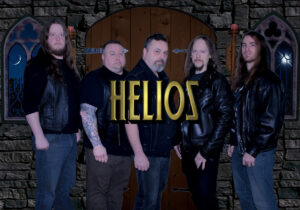