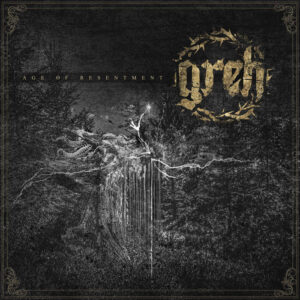 AGE OF RESENTMENT is the debut EP from the eponymously monikered one-man DIY project known as GREH. The six tracks are a mix of sludgy doom that tell stories of humanity’s failings, moral vices, and human indifference, y’know, all of the usual feel good topics you’d expect to hear on a metal record.

Sonically speaking, the tunes reminded me of a hybrid love child between Crowbar and Eyehategod. Most of the tunes have a heavy anchor of low tuned, but distinctively groovy riffs a la latter day Crowbar and the full throated raspy exaltations of guest vocalist Eric Castiglia (so I guess it’s not technically a one man project) recall a winded Phil Anselmo after a relay race. There’s just enough stank on the riffs to give it that EHG vibe, but overall the EP comes across as a love letter to NOLA sludge.

AGE OF RESENTMENT starts out strong with the opening title track with its confidently mid-tempo fade in that gets right to business, followed by the more aggressive angst of “Mental Knot” and the percussive swing of “Winter Grief”, the latter two being a toss-up for best tunes of the lot. But the challenge with sludge records like this that embrace a minimalist ethos is that it’s tough to keep the party from going stale. Even with the best of the genre, I’ve certainly found myself skipping ahead on albums from much bigger bands that GREH; it’s a tough balancing act. And something about Castiglia’s voice sounds like it’s getting tired as the album passes the halfway point; the roar comes across less confident and pronounced and a little more croaky. Maybe that’s intentional, maybe it’s not, but it certainly caught my attention with each listen.

But hey, it’s GREH’s first outing and it’s still pretty good for what it is. There’s definitely some promise in GREH’s mission here (both the band and its creator). AGE OF RESENTMENT is an inoffensive collection of sludge metal tunes that at the very least will get your head nodding with its familiar hooks. AGE OF RESESNTMENT is available now via Bandcamp and all preferred streaming services, check it out for yourself.