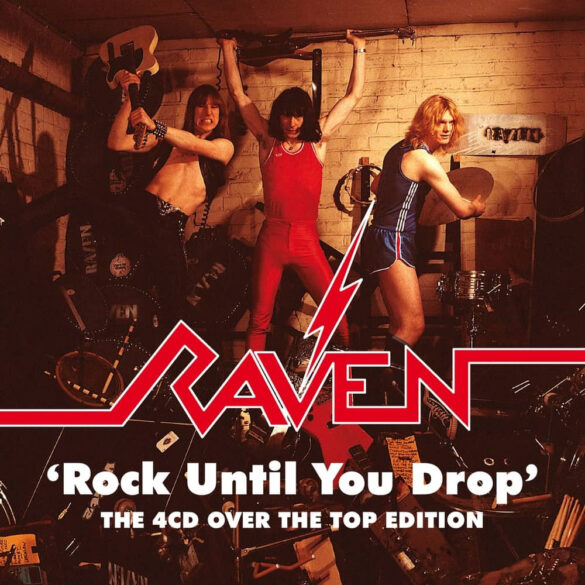 Even if you are not a as big Raven fan, chances are you have heard, or at very least heard of the debut album. Some folks hold ROCK UNTIL YOU DROP in high regard, not only for its sheer musical ferocity but it’s surprisingly early entry into the NWOBHM sweepstakes. Neat records, founded in 1979 and arguably ground zero for the NWOBHM, had the foresight to unleash this beast back in early 1981. Can anyone recall a faster heavier, more frantic album from that time? Remember kids this was recorded in 1980 and came out a full year before Venom’s WELCOME TO HELL! Lastly this album holds a prestigious place in the annals of Metal history bring the full full-length album the label ever released. Neat had only dabbled in vinyl singles up to that point.

Here we are in 2022 and this album still holds weight and is immortalized even further with this 40th anniversary four-disc box-set.

As with most of the find HNE reissue campaign this set of four cardboard sleeves is housed in a clamshell box and comes with a bonus booklet. The 24-page booklet is packed with info and a great write up by John Tucker.

The album is the album. It’s been around forever and us readily available in many formats. In the past I have gently chided HNE for going back to the well too often during their reissue campaigns and not adding enough/any new, rare, unreleased material. They can’t be faulted because sometimes the well is dry, there is only so much material out there. Once a song is out of the vaults, it is out. However, this time HNE had pulled out the stops and we get a wealth of cool rare material.

Disc Two contains some legendary demos, the ones that got the band essentially. They are pretty raw but you can hear that energy in its earliest, primal form. One of them is billed as a live 2-track demos, which really amounts to a rehearsal tape, but it shows how far recoding technology has come!

The next cool item (Disc 3) is a concert from Bologna, Italy illicitly recorded in December of 1982. The sound quality is surprisingly good for a bootleg but the power trio was never really about sonic nuance and the high-fidelity audio experience to begin with! It’s a long gig for a band so early in their career. At one hour and 15 minutes long, it spills into Disc 4. It seems like the band played every single song they ever wrote to that point and added a guitar solo, drum solo and bass solo! To the best of my knowledge the concert is not truncated. They sound young and hungry!

The bulk of Disc 4 is a more compact seven track gig earlier in May of the same year. At seven songs it seems like maybe Raven were opening for someone else at that point.Rounding out Disc 4 is a 16-minute radio interview with Alan Robson of Radio Metro. As a North American the accents were fun to listen to and the sound was pretty poor but it is just a conversation so it is listenable.  The band sound relaxed and like they are having fun.

This four disc set really is the definitive look at this iconic record.  Even if fans like me are familiar with the album, the extra features make this worthwhile.