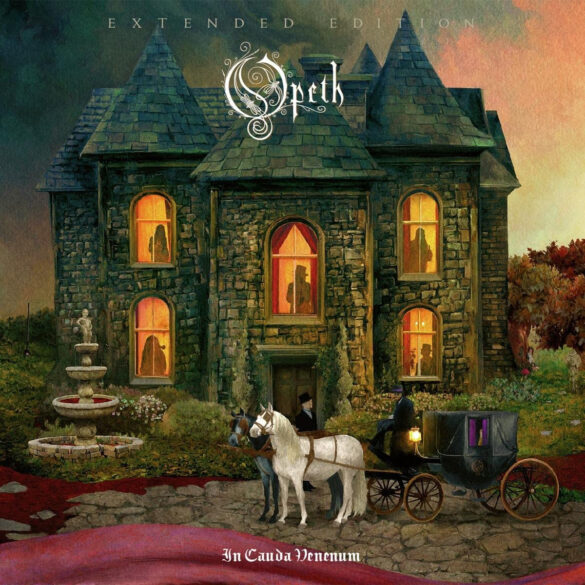 For the majority of bands, 3 years is ample time to write, record and release another album. However, the ongoing pandemic situation resulted in a lack of live shows until recently and it has been an incredibly rough time for the music industry since 2020. As if the halting of gigs and festivals did not deal a big enough blow, drummer Martin Axenrot parted ways with Swedish prog metal/rock band Opeth last year after being a member for over 15 years. In the same instance, Finnish musician Sami Karppinen (Therion) was announced as his replacement for their future tour dates.

Fast forward to May of this year, Opeth re-issued 2019’s In Cauda Venenum, adding three tracks to both the English and Swedish versions. As well as six new songs, this year’s extended version includes additional illustrations by visual artist Travis Smith, which will tempt physical collectors. In Cauda Venenum 2022 has been released through newly-formed label Atomic Fire, who also have the likes of Amorphis, Helloween, and Meshuggah on their roster.

Opener “Garden of Earthly Delights” is mostly instrumental, apart from one of Åkerfeldt’s daughters, who speaks towards the end. The exact same lyrics are used during “Livets trädgård,” where the young girl can be heard speaking in Swedish again.

“Dignity” / “Svekets prins” starts off in a lively fashion, with a soaring vocals from the frontman, guitarist and keyboardist. A man’s monologue swiftly follows, but is not re-interpreted for the English version. The song carries much of the energy and the attitude conveyed in older Opeth songs that have a death metal leaning, thanks to its heavy rhythm section and passionate vocals that are not quite clean or unclean.

One of the most transformative progressive tracks on In Cauda…, “Heart in Hand” is no filler and all killer. Every second of its eight-and-a-half-minutes is utilised to travel to and fro between aggression and gentleness. The heavier sections feel more powerful accompanied with the Swedish lyrics (“Hjärtat vet vad handen gör”), while the softer and acoustic parts fit the English words better.

“Next of Kin” explores some personal matters, which also carries through on “De närmast sörjande” as Mikael Åkerfeldt uses intonation of his voice to stress particular phrases, so that both are emotionally moving. Ballad “Lovelorn Crime” – good in English, heartfelt vocals really drive home the pining nature of the lyrics that also do the job in the Swedish version. “Minnets yta” does sound slightly more emotional and the title is sung with a little more prosody than the alternate track.

“Charlatan” has an intro that bears a similarity to 2002’s “Deliverance,” with a heaviness that reverberates through four minutes of track six. “Charlatan (English Version)” contains dialogue between a woman and child which is identical to the Swedish version. They seem to be discussing religion, though the lack of a translated conversation between the two will surely cause the nature of the speech to be lost on some of Opeth’s international listeners.

An optimistic melody announces the arrival of “Universal Truth” / “Ingen sanning är allas,” before depressive lyrics shift the mood. Like “Heart and Hand” there is a mix of softer and harder music, but this time around the changes are gradual though no less dramatic.

“The Garroter” / “Banemannen” is one of the many songs that demonstrate that In Cauda Venenum should always be enjoyed in running order, as it is beautifully sewn into its predecessor. After sharing its intro with the outro for “Universal Truth”, a piano solo leads in a jazz-like beat, managing to sound ominous with the addition of strings. Unlike tracks with lengthier spoken word segments, the phrase ‘hello, sir!’ is delivered in both English and Swedish on the respective versions, whereas in earlier instances they are heard in Mikael’s mother tongue, making the eighth track a little inconsistent compared to the rest of the record.

Instrumentally, the double album is almost flawless. There are seamless moments such as when “Continuum” / “Kontinuerlig drift” segues into “All Things Shall Pass” / “Allting tar slut,” and an epic solo featured on track 9 that rivals the riffing heard throughout “Heart In Hand”. Original album finale “All Things Shall Pass” is a vocal highlight of the record, on par with the stellar performance from all instrumentalists.

“The Mob” / “Pöbeln” is an acoustic, laidback song that will allow listeners to recover from the eventful two tracks that came before. The desperation that is conveyed through the lead vocals can also be fully appreciated, thanks to less metal elements being present. Proggy from the outset, “Width of a Circle” / “Cirkelns Riktning” suits the vibe of the main album more closely than “The Mob”, boasting lively bursts that counter the calmer excerpts.

“Freedom & Tyranny” ends the reissue on a solemn note, with dark lyrics, with the haunting backing vocals and mellow string melodies ensuring the sombre tone can be understood by worldwide audiences in “Frihet & Tyranni”.

While In Cauda Venenum does not see the return of death growls for Opeth, the band have pushed themselves creatively by recording their thirteenth full-length in two different languages. Re-releasing their latest album and adding less than half an hour’s worth of material may frustrate some as the 2019 (Swedish and English) version is already over 120 minutes long.

Still, ranking at the top of their genre among their contemporaries after over 3 decades of existence, the Swedes must be doing a lot right. Die-hard Opeth fans will appreciate several extra tracks from the Swedish proggers and also the bonus bonus album artwork included with the vinyl/CD physical formats, while casual listeners (or those who already own the standard edition) can opt to buy not previously purchased digitally.