Photos and review by The Flâneur 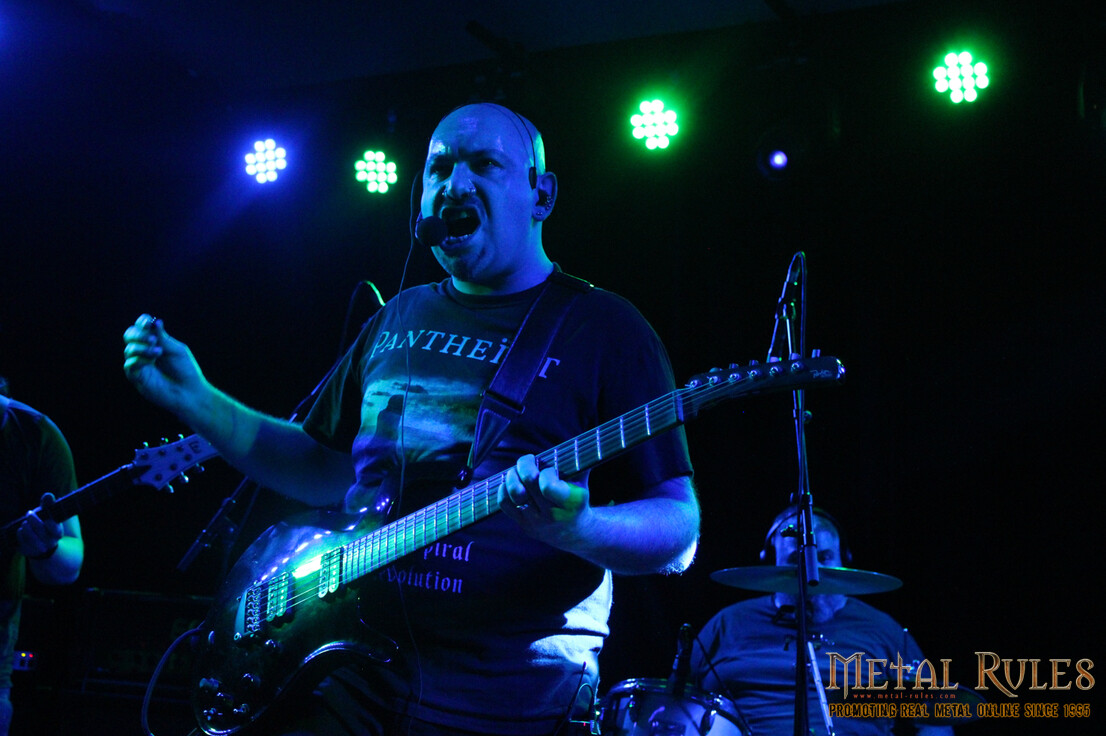 A thirty-year anniversary is an incredible achievement in any band’s life, no matter the genre. The Beatles never even came close. Nor did Reverend Bizarre. Electric Wizard is still a year away. Even the author of this piece hasn’t gotten there yet.

Now, funeral doom is not a new genre, and, the majority of its most recognised contributors were founded in the early 1990s. Incredibly, quite a few of them are actually still going, having achieved the 30+ status themselves. Esoteric, one of the absolute staples of the genre, has now joined this exclusive club, with an absolute shebang in a not-so-exclusive club – Tufnell Park’s finest – the Boston Music Room.

The chilly Saturday night gig began with a mysterious but stellar performance from Lysergene – the electronic project of Esoteric’s original guitarist Gordon Bicknell. I, as well as, it seems, the majority of the audience, wasn’t familiar with Lysergene – but boy, were we all in for a good time. Lysergene’s set began with a dark ambient intro, progressing into heavier electronics, and even rhythmic noise. There were various movie samples interwoven. The creepy nocturnal jungle-like atmosphere was at a stifling point when it veered into psytrance territory. There were even some pre-recorded vocals with Wynardtage remix-like levels of distortion. Then there was a return to dark ambient. The next bit reminded me of Nest’s Trial of the Unwary followed by a spot of Aes Dana – and even trip hop. Lysergene – says he doesn’t like to stay in one genre, and he’s all too good at it.

The venue was still quite empty for most of the first set – and thus more silent than I’d ever witnessed a London venue to be during a gig. Once it started filling up towards the end of the set, the noise became more prominent. The sound was impeccable, but honestly, that’s only to be expected from an electronic project. The spectators didn’t all seem that into it at first, but as time went on, more and more were nodding their heads and tapping their feet in tune with the music. The constant low slimy green lights added perfectly to the swampy nocturnal jungle ambiance. It wasn’t the best lighting for photos but I ended up with some happy accidents. It was all a recipe for a great show ahead. And then, as mysteriously as Lysergene’s set began – it was over. I’m now of the firm opinion that if this set was transported to Electrowerkz with a 3 am start Slimes goers would go absolutely bonkers.

The venue filled up significantly for Norwich cult death doomers Consecration – with the noise levels reaching new highs on multiple accounts. Formed in 2010, Consecration quickly built a horde of loyal local supporters. The audience was clearly excited for their set, and the front row filled up early. I’ve always thought that they are a band that can’t do anything wrong musically, and those suspicions were now confirmed. Somehow, I’d never seen them live till now, and didn’t expect how fun and energetic their performance will be.

They started off slowly, in more of a funeral doom fashion, then picked up the pace. Their stage presence really was the biggest shock of the evening (for me). I never attend funeral/death doom shows anticipating a whole lot to happen visually, but Consecration kept my shutter constantly busy. Absolute props to them for really putting their best into their performance and making a real spectacle out of it. In their approximately 45 minute performance, they only played pieces from their new album Cinis, released only two days prior. The peak moment of their set, however, was the proclamation “The next song is going to be a really slow one”. It wasn’t. In fact, it veered off into grind territory, which was a refreshing change of pace.

Consecration’s sound started off as medium rare but after some early vocal and guitar tweaks it improved tremendously. I loved that I could actually hear the bass too – a nice change after a string of black metal gigs. I also loved that all members had donned a uniform of black shirts and trousers. It was really very fitting to the music and added to the visual aspect of their performance. Whenever he’d announce the next song, the northern accent of vocalist Daniel Bollans was a sobering kick. And, in this same vein, Consecration’s set ended with a final bang, amid a sea of applause.

Esoteric brought along a discernible change in the atmosphere – before their set even began. They spent the entirety of the intermission just setting up their pedal boards – which, if I’m not mistaken, were five. In fact, the pedal boards and paraphernalia took up about half of the stage, if not more. It was hugely impressive. I won’t lie, I took some photos specifically of their set up. I do have to remark, before embarking on my review of their performance, that their vocalist – legendary Greg Chandler, and that of Consecration – Daniel Bollans, looked eerily alike.

Once on stage, Esoteric wasted no time and dived straight into their set, no frills. Slow and impossibly heavy, their sound was monumental yet as if plucked from the deepest pits of the earth. It’s always such a treat to hear Greg Chandler’s inhuman vocals live – and to see his customary head mic. Esoteric’s sound configuration really was next level, and I honestly don’t think the sound at Boston Music Room had ever been as good. It’s frankly impossible not to be in awe of all the care and precision Esoteric put into their live sound. They’re not really a visual spectacle kind of band nor do they care for spinning the audience into a riot. Instead, they overwhelm everyone listening to them – or seeing them live – with the sheer magnitude of their sound.

And, I mean, one can argue that all funeral doom bands sound roughly the same. But, there’s this discernible je ne sais quoi that Esoteric have, which has firmly allotted them a special place in my heart. They’re not just a slow heavy wall of sound. The emotion, the song-building, the technical sublimity they combine are all truly unique. Now, with all that being said, I really don’t think Boston Music Room was the best venue for this gig – and I suspect most London venues of similar size wouldn’t have been either. Nine years ago, I saw Esoteric for the first time ever – they were performing at this small festival in provincial Romania. The stage was open air and their set was after dark. I rather think that is the best way to experience their music live. An enclosed venue simply doesn’t cut it. The resonance of the open air and the crisp chill of the night were a much more suitable host for Esoteric’s genius.

Esoteric performed for nearly an hour and a half, walking us through their discography by performing a piece from each of their full lengths (except for Epistemological Despondency and The Maniacal Vale). They never said anything about their thirty-year anniversary. In fact, they barely said anything at all. I expected no less!