The day has finally come for metal titans KREATOR to unleash the beast that is their monster new album, ‘Hate Über Alles’- a strong album-of-the-year contender as well as a clear statement against hate & the division of society.

To mark its release day, KREATOR present “Become Immortal”, a lyrical and visual look back through the ages of their legendary career, whilst passing the torch to young German thrashers DESTROY THEM from Mille’s hometown, Essen, who feature as the KREATOR performing in the video.

“One intro, 10 genuinely fantastic songs, absolutely no fucking about. They may have nothing to prove after nearly four decades of active service but Hate Über Alles proves it anyway. When it comes to hitting the heavy metal nail on the head with maximum conviction, Kreator are firmly top of the bill.” – Metal Hammer (UK)

“Hate Über Alles is an album almost designed to piss someone off. And it might, if it wasn’t so goddamned awesome.” – Metal Injection (US)

“The legends from the Ruhr area have delivered another masterpiece and the only ones able to dethrone them would be themselves.” – Metal Hammer (DE) / Album Of The Month

“KREATOR are basically a licence to produce anthems. They have nothing left to prove after laying waste to the opposition for decades and still manage to come out all guns blazing with one of their best releases to date.” – Distorted Sound (UK)

“KREATOR sound as confident and strong as ever” – Blabbermouth (US)

“Rarely any other band manages to sound as fresh, hungry and inspired after almost 40 years as Petrozza and his pals.” – Metal.de (DE)

“a terrific (thrash) metal album through and through and at the same time a hot contender for ‘genre dominator of the year’. KREATOR über alles!”
– Stormbringer.at (AT) 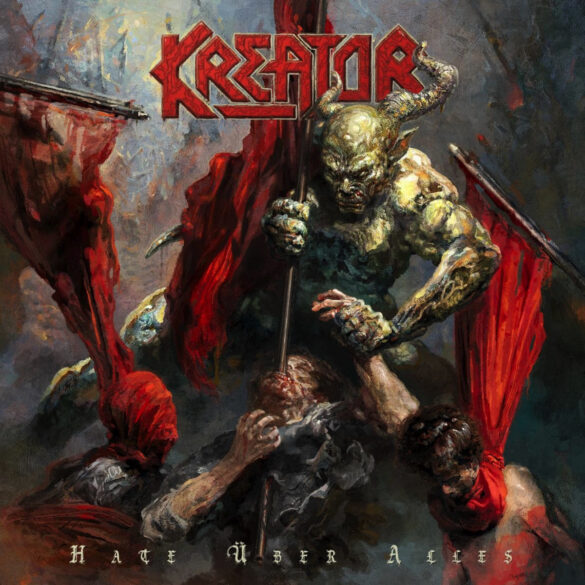 TRIFOLD 2LP with an etching on the D-side