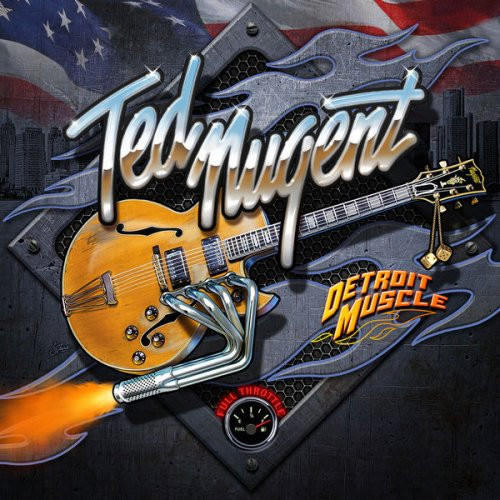 There has been a lot of discussion in the Metal community if a fan can separate the artist from the art. There are two main streams of thought. Some fans feel that any art created by an artist are representative of that same person. The other camp says you can distinguish between the behaviour and attitude of the artist and the art they create. I fall in the latter camp.

That’s brings us to Ted Nugent. It would be easy, too easy, almost to the point of lazy journalism, to for the low-hanging fruit and talk about about the politics of the motor city madman. Let’s talk about his new album, DETROIT MUSCLE without stooping to political commentary and actually discuss the music.

Uncle Ted had just released his 16th studio album on Pavement and it is a burner.

Running a lean 33 minutes across 11 songs, the album is par for the course for his last few albums. It is not as heavy as CRAVEMAN (20 years ago now!) but in-line with LOVE GRENADE and his subsequent records. It sports decent cover art with a car/guitar motif as well with the classic Nugent metallic font.

The Nuge has really a unique signature style and it is on display here in full force. His blend of groove, funk, soul, blues, Hard Rock and electric speed come to the fore with some diverse tunes. Credit also goes to the band, the line-up remains unchanged as Greg Smith (bass) and Jason Hartless (drums) round out the power-trio.

The title track rips, ‘American Campfire’ taps the same spirit of ‘I Love My BBQ’ from a few albums back and he puts in a clinic with ‘Feedback Grindfire’. Not bad for a guy in 70’s, putting out twice as much heat as guys half his age. There is the obligatory pro-gun song ‘Come And Take It’ and admittedly the album lags a bit in the middle with three slow songs in a row (‘Alaska’, ‘WinterSpring SummerFall’ and ‘Leave The Lights On’ all of them in the vein of ‘Fred Bear’. A patriot to the core he wraps it up with a white-hot version of the Star-Spangled Banner which has become a bit if a signature song due him as he often performs it solo at various state and county fairs and events across the US.

There is a refreshing sincerity and honesty in DETROIT MUSCLE. by adhering to what some might consider an outdated sound, Ted and the boys have, intentionally or not become champions of this style that really nobody is doing anymore, except maybe ZZ Top and Sammy Hagar.

Detroit has always had this unshakable rock credibility/cache/ spirit dating back to Kiss and ‘Detroit Rock City’ back in ‘76 to Alice Coopers recent album DETROIT STORIES from last year. Now Ted Nugent joins those illustrious artists with his own tribute to the indestructible power of Detroit, cars, freedom and Rock n’ Roll.