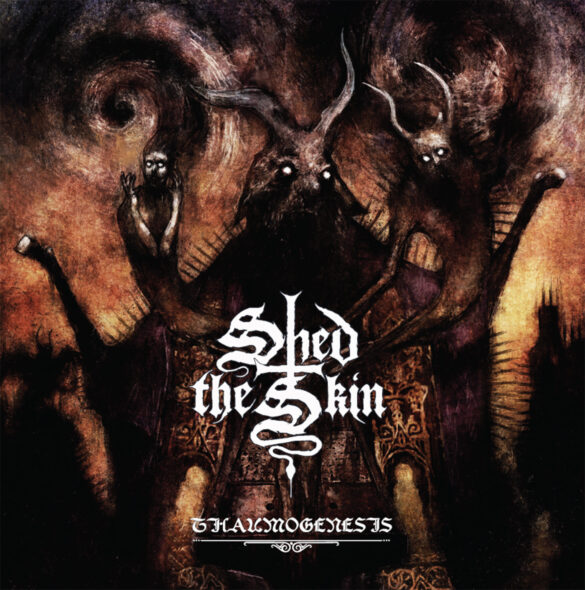 Full-length number four for Cleveland, Ohio’s death metal quartet Shed The Skin has arrived in the shape of Thaumogenesis, following up The Forbidden Arts (2020). Consisting of members from groups such as Incantation, Ringworm, Crucified Mortals and Vindicator, the band had been created in honour of late musician Tom Rojack, who played in Blood Of Christ with STS guitarist Matt Sorg.

“…more than anything, it’s Shed The Skin’s songwriting across the album that puts Thaumogenesis into a masterclass all its own, proving that death metal can stay pure ‘n’ proud but also move forward. Credit for that must also go to Incantation’s Chuck Sherwood, who once again provides lyrical concepts, which cover an array of topics including Scottish pagan tribal warfare, ancient Persian goddess worship, Mongolian/Siberia sacrificial rites, Belarusian shapeshifting rituals, Judean/Arab conquests, Roman ritual curses, Hindu death cults, and classic demonology.”

If the eerie introduction for “Ingress-Thaumogenesis” is not unsettling enough for listeners, Ash Thomas’ bloodcurdling roar follows to further perpetuate a sense of dread. Remnants of the creepy intro are reincarnated throughout the opener by guitarists Sorg and Thomas.

“She of Urgarit” is next, with a more traditionally heavy metal start. While the frontman spews lyrics concerning rotting and decaying, he axemen keep things relatively melodic while the rhythm section maintain the colossal, deep sound that also resonates through the other nine tracks.

A slower, ominous intro marks the arrival of “Invincible In Iron”, acting as the calm before the storm as the third track eventually morphs into an energetic beast. Track three’s brief playing time does not limit the level of depravity it depicts.

“Slaughtered in the Solar Eclipse” is a blend of hair-raisingly suspenseful blend of chugging guitars, gargling growls and dramatic pauses. All these elements contribute to inducing a sense of violence, while a haunting finish ensures the track will be remembered well after its end.

As Thaumogenesis reaches its midway point, the groove oriented nature of “Hounds of Orrea” will encourage listeners to dance as well as headbang. The longest song on the album, it makes excellent use of some techniques previously used.

Kyle Severn’s belligerent stick-work on “Quenched From Kapala” ensures that there is no room for boredom during the last half of the record. His performance is almost inhuman, as he delivers a range of lightning-speed drumming techniques, including blast beats.

“Blades of the Lightning Altar” carries an anarchistic, death ’n’ roll vibe, brought about by the speedily-delivered lyrics and high-energy drumming. If not for the visceral vocals and guitar solos, song eight could pass for a punk composition.

Echoing vocals are implemented again, though sound more impactful throughout “Snow Forest Sacrifice” than on track four, due to the slower tempo for the majority of the song allow Thomas’ voice to be heard more distinctly.

Finale “Voces Mysticae-Egress” inherits some highlights from the album’s previous offerings such as the punkish flair of track eight, with a renewed sense of aggression this time around. The outro of the closer mirrors the start of the album, which provides a weird yet familiar experience that is amplified if Thaumogensis is played on a loop.

The veteran musicians in Shed The Skin have created well-produced, distinctive death metal album that draws it uniqueness from being inspired by a multitude of practices around the world. Fans of Asphyx, Carcass and Entombed are not to miss Thaumogensis. 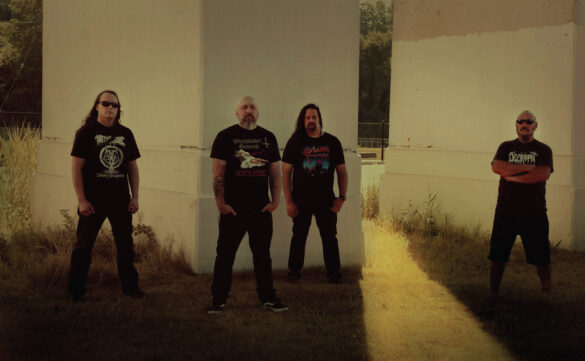 1. Ingress-Thaumogenesis
2. She of Urgarit
3. Invincible in Iron
4. Slaughtered in the Solar Eclipse
5. Hounds of Orrea
6. Quenched From Kapala
7. Blood Runs Red
8. Blades of the Lightning Altar
9. Snow Forest Sacrifice