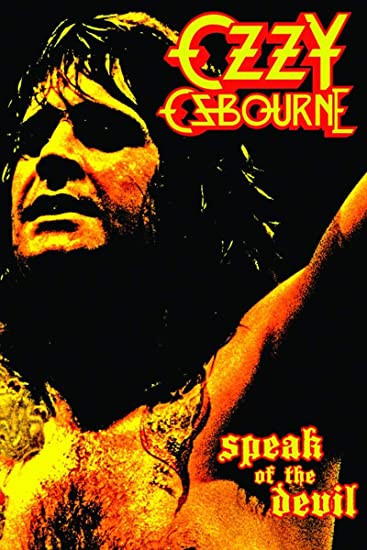 Quite often there is a method to my madness when it comes to how I choose what to review. In this case I just randomly grabbed a stack of three Ozzy DVD’s that I knew we hadn’t written reviews for. Regular readers may recall that we at Metal-Rules.com have a lofty goal to review every Metal movie/home video/VHS/DVD known to man. For no particular reason it’s Ozzy month and I have reviewed SPEAK OF THE DEVIL (1982), DON’T BLAME ME (1991), LIVE & LOUD (1993). Please feel free to enjoy all three reviews in this mini-feature.

Even though SPEAK OF THE DEVIL was the last of three Ozzy DVD’s in this feature to be released on home video, it was the first to be filmed.

This DVD is a live concert from 1982. More specifically it was filmed on June 12, 1982 in California. Originally this aired as a MTV Halloween special. Allegedly it was available in Japan in home video but it wasn’t until 2012 when Eagle Rock licensed it and it finally got released on DVD.  The DVD itself is only a single disc, the concert is only 78 minutes long and there are no bonus features. The DVD cones with a booklet with full credits and a nice nostalgic essay by Rudy Sarzo written 30 years later. It’s almost like the 30th anniversary of the concert but it is not billed as such.

The stage is massive and used a a two-tier medieval castle motif. There are so also laser special effects that apparently didn’t work that well on the day of the show and were added post-production. It is a nicely presented, multi-camera gig, pretty advanced for it’s time. The sound and clarity of the images are very decent. Sure it’s not HD but it was an outdoor show so the air quality is clearer making for a more in focus show. At this point Ozzy was still a ‘band’ and everyone, even Don Airey in his monk robe, get some decent on-screen time.

One of the highlights is the guitar/keyboard/drum solo, where Aldridge plays the second half with his hands (no sticks!) and it all culminates with the mock hanging of a dwarf, perhaps a tip of the hat to Alice Cooper. After that climatic moment Ozzy sequels oddly enough into a nice version of ‘Goodbye To Romance’, which, in hindsight, is an an early stab at a power ballad before the form was perfected by Scorpions not that long much later.

This passing of Randy Rhoads and the subsequent decision to film the tour with Brad Gillis has been well documented so I won’t dwell on the details of that but I’m glad it was captured for all eternity. This is vintage Ozzy, and despite being addicted, tired after a six-month your, and depressed about the death of his friend he still delivers.

It was really fun to go back and see this concert after many years. Today we see often see Ozzy in the media and the reality of his disease and age are at the forefront but this concert, filmed 40 years ago this month (as of time of writing), captures Ozzy as the ultimate performer.