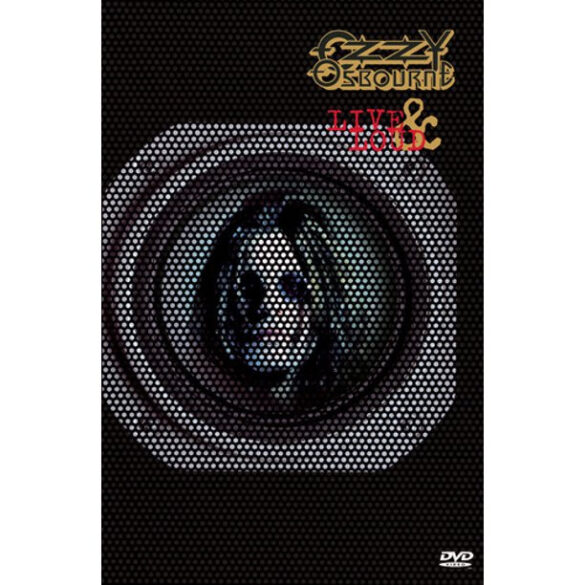 Quite often there is a method to my madness when it comes to how I choose what to review. In this case I just randomly grabbed a stack of three Ozzy DVD’s that I knew we hadn’t written reviews for. Regular readers may recall that we at Metal-Rules.com have a lofty goal to review every Metal movie/home video/VHS/DVD known to man. For no particular reason it’s Ozzy month and I have reviewed SPEAK OF THE DEVIL (1982), DON’T BLAME ME (1991), LIVE & LOUD (1993). Please feel free to enjoy all three reviews in this mini-feature.

For decades I have had a stand-off type relationship to Ozzy live albums. To be frank I just don’t like the way they have been designed and presented. His first solo album SPEAK OF THE DEVIL was just a strange, poorly produced album of old Sabbath stuff.  TRIBUTE was a weird mish-mash of shows from US, Canada and the UK and it wasn’t really in support of an album or tour.  These albums were never released as home videos. He has had a few live concert videos (BARK AT THE MOON, and THE ULTIMATE OZZY) that were full concerts but were never released as live albums. So finally, a full decade into his solo career, his (supposedly) farewell tour we get his first, true, double live album and home video set.

For some reason the DVD is divided into two sides. You have to flip the disc over! My version did not come with a booklet and there are no bonus features. Add an uninspired title and it all seemed a bit underwhelming compared to the white-hot LIVE IN BUDOKAN album ten years later.

My main complaint is that LIVE & LOUD is one of those tour compilation videos not a single concert. This is a montage of the farewell tour and has had heavy-post-production work. It is like watching an Ozzy video, not a live concert. This thing was Frankensteined together in an editing studio somewhere.  Having said that it is a huge major label production and the quality is very high. The shots are fast but not too frantic or unwatchable.

LIVE & LOUD was directed by Jen Brien. There are two problems with this. Brien directed the Ozzy documentary and home video DON’T BLAME ME (also reviewed in this feature) a couple years prior. He brings his documentarian style which, is technically flawless, it is not my preferred style. Secondly a live concert should not have a ‘director’ to begin with. You set up the cameras and hit go. Nothing needs to be ‘directed’. Case in point we get annoying interruptions with little clips in between some songs. This takes away from the momentum when you are going from a song to a scene of OZZY sitting in a hotel room in a towel mumbling about something. Lastly several bits of footage in this had already been shown in DON’T BLAME ME so Brien went back to the well.

It opens with a video montage which presumably the audience saw on screens before the concert. The band is on fire and Zakk looks young with his pre-beard baby face. The sound is pretty superb from start to finish and the energy level is high. The crowd noise seems imported, I’ll have to go back and compare the Double live cassette I bought back in the day.

The track list is a bit pedestrian. At that point Ozzy had five solo albums but BARK AT THE MOON, ULTIMATE SIN and NO REST FOR THE WICKED each only had one song represented, the predictable singles and hits. Yes, it was supposed to be a career retrospective set-list so it gets a grudging pass and we get half of his debut solo album and three Sabbath songs and four (!) ballads.  The Sabbath reunion was a highlight scene for many.

We get some pretty cliched shots/motiffs , during the ballad ‘Road To Nowhere’ we switch to black and white, slow motion with scenes of random roadies setting up the stage. During ‘Flying High Again’ we are treated to tons of female flesh and sweaty fans. In many places there are distorted frames and odd visual effects.  Creative? Yes. Interesting? Mostly. Live? Not even close. Watching this ‘concert’ is like watching 18 MTV rock videos in a row.  It’s disconcerting when every few seconds the stage and stage gear is different; indoor shows, outdoor shows, Ozzy with shirt on, Ozzy with shirt off…you get the idea.

This is undeniably a cool piece of Ozzy history but it is so contrived and manufactured that it takes away from my enjoyment and takes it done from true greatness to above average. LIVE & LOUD is heavily stylized with imported crowd noise and it falls more into the category of ‘concert film’ as compared to ‘live concert’. I’m probably being too critical and over-analytical, it’s still Ozzy and it still rules. Plus we get to see some boobs so it’s a qualified win.