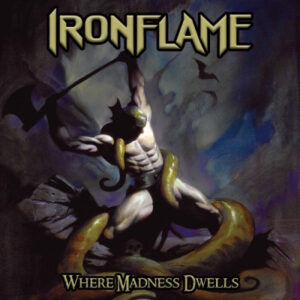 After a two year wait, the multi-talented and always busy Andrew D’Cagna has finally graced us with a new IRONFLAME album. I’ve been a huge fan of this band ever since I heard Lightning Strikes the Crown, their monstrous 2017 debut album that was supposed to be a one off tribute to a fallen metal brother. That debut was met with such acclaim, and rightly so because I still consider it one of the best metal albums ever made. D’Cagna’s approach to songwriting and his incredible vocals reminded me of all the reasons why I loved metal. Album number four, Where Madness Dwells sees D’Cagna dialing back the epic fantasy themes as well as shifting the songwriting approach just a bit. Will this album hit like the other three?

“Famine, pestilence, war, disease, and death…. they rule this world!” Any time you can add Vincent Price’s voice to a metal song you know the album is going to rock. “Everlasting Fire” is that album opener that gets the blood moving and sets the pace of the rest of the album. I can also tell that D’Cagna’s focus was more on the riffs and creating a slightly heavier song structure which went well with the overall darker theme of this album. It’s obvious that everything that has occurred in the last couple of years has had some influence on the atmosphere of this album. Whatever the case, what is apparent here is that the riffs are heavier and there are plenty of them. The dual lead riffs that have always been a signature of this band are still there but songs like the first single “Kingdom of Lies” hit you with some heavier, almost thrash riffing. D’Cagna was also channeling his inner Bruce Dickenson on this one because some of the notes he hits sound just like some old Maiden.

As we move through this album we begin to see that even though the approach here was not as much in an epic direction, I don’t think D’Cagna has it in him to not create some seriously epic atmospheres. “A Funeral Within” as well as the title track hit you with sheer epic metal. The former being a bit slower and building while the latter is just huge from the start. The verse comes at you with its anthemic approach and the chorus is short and to the point but still grabs you. Once again, D’Cagna is responsible for all the instruments except for the solos, which were handled by live members Quinn Lucas (ICARUS WITCH) and Jesse Scott. Their solos add that cherry on the top that just sends these songs to the next level. The solo on “A Curse Upon Mankind” is the perfect example of melody, incredible tone, and amazing fretwork.

I’m not sure how Mr. D’Cagna finds the time to participate in folk metal band NECHOCHWEN, play bass in BRIMSTONE COVEN, be the full time vocalist for Pittsburgh melodic metal legends ICARUS WITCH, and write and record an entire album virtually all by himself… and the album smokes!! Once again D’Cagna has created another essential metal album that brings back those same feelings as the first time I heard JUDAS PRIEST, DIO or MAIDEN, I know you’ll feel it too. This album is calling you. 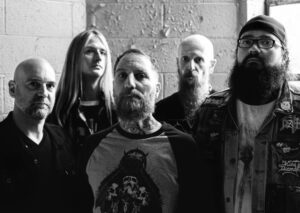