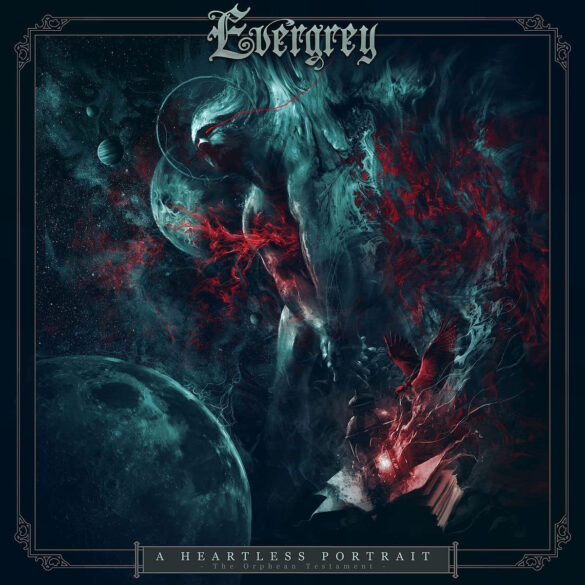 Last year, the almighty Evergrey released what I considered to be their finest recording ever, ESCAPE OF THE PHOENIX. It was an easy choice for my 2021 Album of the Year. Incredibly, just fifteen short months later, they return with their first release for Napalm Records, A HEARTLESS PORTRAIT (THE ORPHEAN TESTAMENT). With such a small amount of time between albums, could this new offering even come close to matching the quality of its predecessor?

Bruce Springsteen once stated, “Getting an audience is hard. Sustaining an audience is hard. It demands a consistency of thought, of purpose, and of action over a long period of time.” Evergrey have adopted this simple but profound credo, and apply it day after day, month after month, and year after year. They are astonishingly consistent and continue to defy creative logic by releasing fresh, relevant, powerfully emotional material that stirs the soul. All the recognizable Evergrey elements are still securely in place throughout this new collection, but it feels like the change to Napalm Records has reinvigorated the band! Tom Englund’s ageless soulful vocals continue to be front and center, effortlessly establishing that all-important empathetic connection with the listener. The guitars of Englund and Henrik Danhage are as heavy as ever and the solos are played with a noticeably new fiery gusto! Rikard Zander’s keys are more prominent this go round and play a much more significant role in the songs. The machine-like power and precision of Johann Niemann and Jonas Ekdahl on bass and drums propels the album forward with ease.

A HEARTLESS PORTRAIT is absolutely jam packed with Evergrey’s trademark haunting melodies, poignant lyrics, infectious choruses, and exquisitely crafted solos. Each Evergrey album speaks to every listener in a different way. My favorite tracks are perpetually changing. Currently “Midwinter Calls,” “Ominous,” “Call Out The Dark,” “The Orphean Testament,” “The Great Unwashed,” and “Heartless” seem to have grabbed my attention the most. Those tunes really highlight the renewed creative energy found all over this new offering.

Since the release of HYMNS FOR THE BROKEN back in 2014, Evergrey have been on an unprecedented musical hot streak. They continue to deliver complex progressive metal compositions that contain just enough familiar elements to satisfy their fiercely loyal fanbase, while adding subtle new components that are sure to bring in new listeners. With a newfound artistic spark, Evergrey have actually raised the bar themselves and delivered yet another genre defining masterpiece!

1. Save Us
2. Midwinter Calls
3. Ominous
4. Call Out The Dark
5. The Orphean Testament
6. Reawakening
7. The Great Unwashed
8. Heartless
9. Blindfolded
10. Wildfires