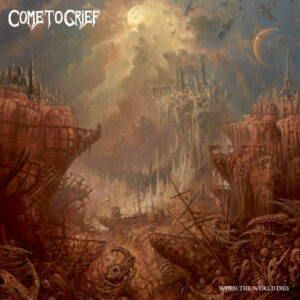 WHEN THE WORLD DIES is the perfect soundtrack for the times we’re living in. The debut full length from Come to Grief embodies the nihilism, hopelessness and general discomfort that seem to smack us in the face every goddam day.

For those not up to speed, Come to Grief is the spiritual successor to Boston’s long since retired Grief, boasting alumni Terry Savastano and Chuck Conlon in the ranks. Though the band has released a number of splits and singles over the years, WHEN THE WORLD DIES is this first proper full length under the new moniker. It’s definitely the most polished version of Come to Grief we’ve head yet, but that slicker veneer allows every decibel of anxiety to ring through with more angst and clarity.

No surprise, most of the WHEN THE WORLD DIES revels in mid-tempo, crusty sludge riffs that obligingly batter the listener. But listening to the album from start to finish, there’s a clear escalation of intensity as the tunes march forward. “Scum Like You” has a little bit of Celtic Frost in its DNA, “Devastation of Souls” swings like a pissed off gorilla with a tranq dart in its ass, while the title track wallows in atonal harmonies and some special effects. But the one-two closing punches of “Bludgeon the Soul/Returning to the Void” and in particular “Death Can’t Come Soon Enough” are pure old school Grief. The guitars roar like a jet engine taking off but still manage to weave in threads of contrasting melody, the combination of which makes for a delightful sonic dichotomy.

By the time the album’s final notes fade out, you’ll be left feeling a little dirtier and maybe a little more hopeless. This is what Come to Grief (and Grief before them) have been for decades. The next time you’re watching the evening news, turn the volume down on your TV and crank up WHEN THE WORLD DIES; I think you’ll be surprised at how well this album compliments what a wretch of a society we’ve become.

Track List:
1. Our End Begins
2. Life’s Curse
3. Scum Like You
4. Devastation of Souls
5. When the World Dies
6. Bludgeon the Soul/Returning to the Void
7. Death Can’t Come Soon Enough