Following the release of their twelfth studio album, Dystopia I caught up with Germany’s metalcore group: Caliban to find out what the band has been up to in recent years and has planned for the future.

Hi and thanks for joining us. Let’s begin with “Dystopia”: does the album title refer to a dystopian future in general or is to more to do with recent events?

Hi. The title “Dystopia” only came up in the end. A summary of the content of the lyrics, which are timeless, but unfortunately very close to reality at the moment.

How big an influence is the covid pandemic on the album?

We have intentionally not included the topic of the pandemic. Maybe there is something that has been subtly included in the lyrics.

How is Dystopia different from the other albums Caliban has put out?

Dystopia is darker and has a more edgy feel overall than the recent albums I guess. There are of course modern elements again, but the “old school” part is a bit bigger and more present this time.

Was there a particular reason for the four years between this and 2018’s “Elements”?

We already withdrew before the start of the pandemic to work on new songs. We wanted a full break from everything to focus on the songwriting. The release was planned after the usual 2 years, but due to the pandemic we decided against it and paused the writing process of “Dystopia” to record our EP “Zeitgeister” first.

What was it like working with the album’s guest musicians: Christoph Wieczorek (Annisokay), Jonny Davy (Job For A Cowboy) and Marcus Bischoff of Heaven Shall Burn?

All the guest singers did a killer job. We worked out the parts in the studio and discussed them with the guest singers. Then everyone recorded their part in their “own” studio. We are super happy with the result, all features fit in perfectly.

How would you describe Caliban’s music to people who’ve just discovered the band, is it metalcore or deathcore or do you have your own name for your sound?

You could say metalcore, that’s where we have our roots and everything builds on that. Of course, there are always new elements in our songs, we combine electro sounds, a bit of gent or death/thrash parts…but in my eyes it’s a natural progression of the genre.

How has metal changed in the 25 years Caliban has been around in your eyes? Not just in Germany but in general.

The music has become much more complex and sophisticated. More and more new knots are being tied and thus more and more genres are being connected. At best, this makes the music very interesting, but sometimes it also makes it trivial, because there is no longer any recognition value. Overall, I think the development is good.

I also feel that the scene in general has developed positively. People have become more open and show more tolerance towards other genres than their preferred one. There are certainly still genres that won’t come together, but compared to our beginnings, things have already changed for the better. 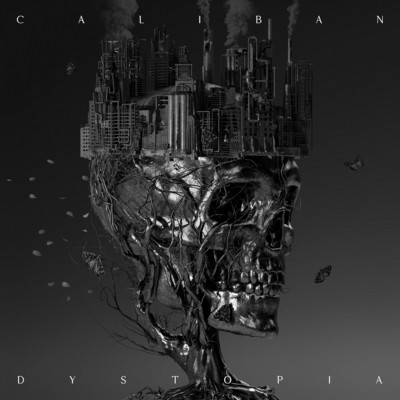 Where do you see the band going in the future, do you have any other material planned or a world tour perhaps?

We are planning with caution, because we still cannot say 100 per cent what we will face again at the end of the year, in terms of Corona and new waves of disease.

We are playing some festivals like Rock Am Ring, Rock Im Park, Summer Breeze Festival, Relaod Festival and the Elbriot Festival…we are planning a European tour at the end of the year and otherwise we are promoting “Dystopia”.

What made you name the band after the character in The Tempest, is there some significance of that Caliban for what the band stands for?

Caliban is a wild creature… crude, brutal and untamable. These are at least the characteristics that convinced us of the name “Caliban” back then. Describes the music quite well.

What’s it been like working with Century Media; have you been with them a long time and how do they compare to other labels you’ve worked with?

We have been working with Century Media for over 15 years now, we are part of the family and until now it has always been very good and relaxed.

What is your personal favourite song from Dystopia?

I can give you my Top3: Alien, Dystopia, and Ascent Of The Blessed.

What’s it been like getting back on the road and playing live shows again after spending time in lockdown.

At the beginning it was a surreal feeling to go on stage again, to see so many people in one place, without a mask, without distance…then the question, can you still deliver a good show? But when you were on stage and the first song was over, you felt like the break never existed. That was very much needed!

What inspired you to become a musician in the first place, and what do you enjoy most about it?

At that time we were always very interested in music and at some point the question came up, who would like to make music…and so it went it’s way. At that time, nobody would have thought that we would do it full-time.

Outside of music, what do you guys get up to, do you have day jobs or any other big pastimes?

We all have more or less permanent jobs. That’s what happened during the pandemic.

What advice would you give to fans wanting to start their own bands from your experiences on the road.

Just do it! Just try it out, find your style and play as much and as often as possible! Don’t chase after any hype, find your own way.

Finally, do you have anything you would like to say to our readers?

Thank you for your interest. I hope you like “Dystopia” and that we can see each other live again soon. Stay metal, healthy and sane.

Thank you so much for joining us I wish you all the best for the future.