Interview by The Flâneur

Hi and thank you for your time. Could you tell us how and why you picked the name Comando Praetorio?

Comando Praetorio is composed of two Latin words which together they mean ‘Order to march forward’. We choose a powerful and austere moniker that blended with our music. It also represents a sum of what we intend to pursue both individually and as the entire band: a descent into the recesses of our souls to commute antidote from poison.

You’ve had a consistent line-up since 2015. How has your sound evolved since? Could you outline how each member contributed to this evolution, and in what ways has the band grown musically in the past 7 years?

COMANDO PRAETORIO were founded in 2012 by the will of Ans (guitar) and L. Opfergeist (drums and guitar), musicians simultaneously active in Movimento D’Avanguardia Ermetico band. After a short time, the line-up was completed by bassist F.A.K. and singer A.M., both in contact with the founding members for years. The group’s goal is the transposition of the elitist attitude driving the personality of these musicians in a traditional and fiercely underground black metal.

The great creative affinity materializes in the three tracks of the Divinità Terrifiche MiniCD, published in January 2015 by War Command and produced by Gigi Andreone. In 2019 COMANDO PRAETORIO got signed by the label ATMF, which in December releases their first official full-length LP, Ignee Sacertà Ctonie. Adorned by the cover of the artist Timo Ketola and engineered by the same producer, the album sees the departure of A.M. at the end of the recordings. His replacement Damien actively contributes to the composition of the new EP Sovvertire La Tirannia Della Luce, recorded in his home studio. The involvement of the new singer is realized in a significant contribution in terms songwriting and arrangements, integrating perfectly into the project and fully adhering to the founding values ​​of COMANDO PRAETORIO.

Each of us plays or has played in other bands such as Movimento d’Avanguardia Ermetico, Mortuary Drape etc, but at that time we felt the need to find a new expressive and artistic form for our intimate visions. A less mediated, more direct and powerful musical form. This is how Comando Praetorio was born in autumn 2012. We have recently completed our new ep “Sovvertire la tirannia della Luce” which was released on April 22 of this year on Aeternitas Tenebrarum Music Foundation.

Your first full-length, the 2019 Ignee sacertà ctonie was a ponderous spiritual journey from start to finish. How does your new EP Sovvertire la tirannia della luce differ from it, and how is it similar?

The concept of “Ignee…” is based upon Hirpi Sorani’s ancestral cults, an Indo-European tribe who lived near Mount Soratte, in the Lazio region; it is focused on the primordial symbolism of Fire, both telluric and celestial power, worshipped in the bowels of the earth as in the heavens, bearer of the light and heat that presides over the hearth, transmuter of matter, source of purification / incineration. This sacred society of men was also linked to the wolf cult, and for this reason we think it fits perfectly with the wild and transcendental sounds of our music.

Do you think it’s easier to work on shorter releases?

There was no planning about the length of the EP. 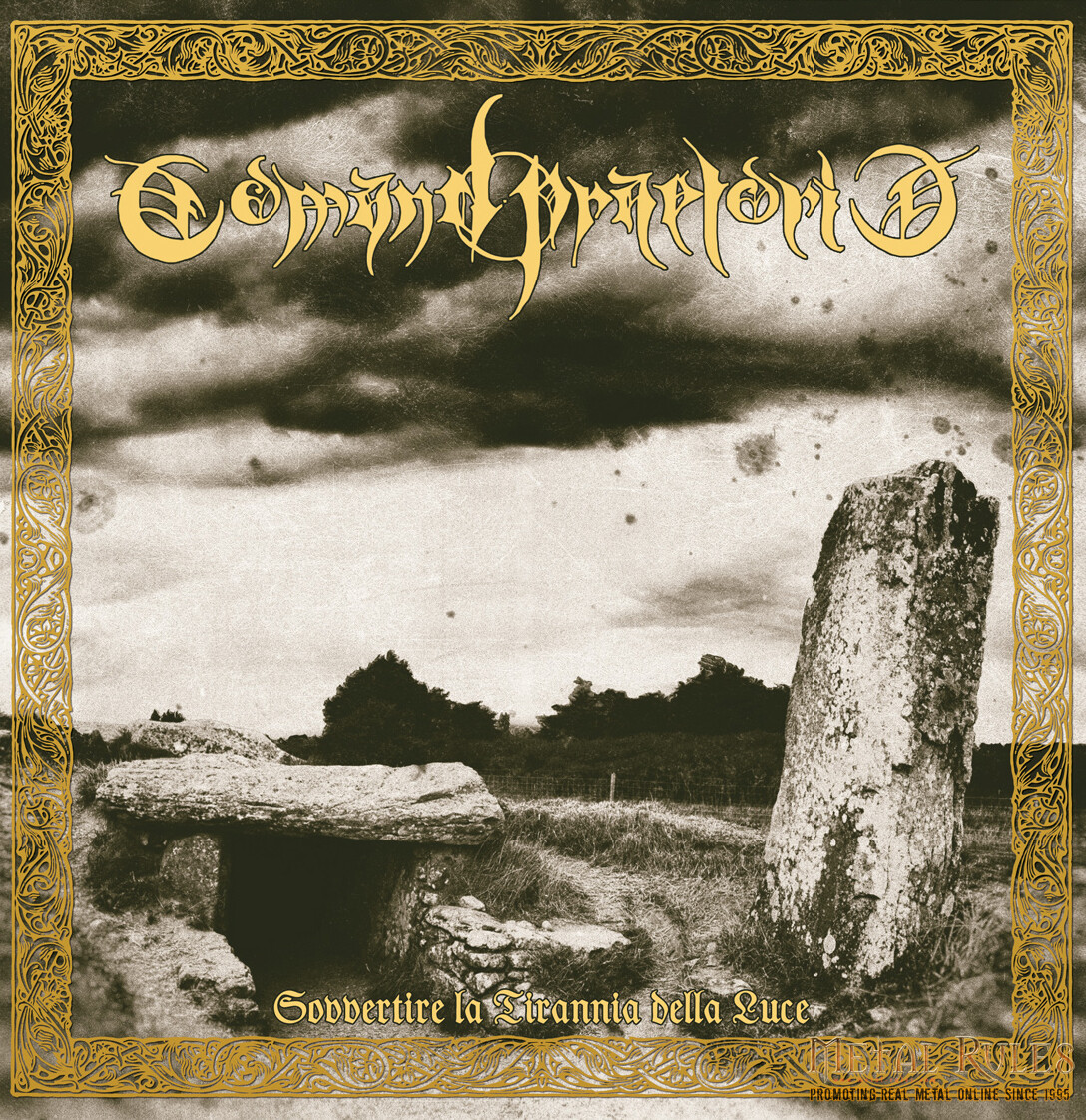 What aspect of working on Sovvertire la tirannia della luce did you enjoy the most?

The new EP Sovvertire La Tirannia Della Luce refers to a process of physical and spiritual distancing from the monotheistic tyranny of the sun, which is meant both as the Logos of abstract, withering and repressing rationality, and as an expression of Abrahamic monotheism. Denying this hypertrophy of the solar side, the One takes refuge in the shadow of the night sky, patronized by the Indo-European Asuric and Uranian deities. This denial brings about a subversion of the values to massification: the ultimate consequence of desert religions, which were created in the desert and want to bring the world back to the desert itself.

Was it a challenge to work on a new release during the pandemic?

In fact, there was no pandemic in the way that the media described it. Especially in Italy there was a psy-op done to install a capitalist dictatorshit according to the new world order. The Covid disease is true, but it was used to implement the NOW agenda. The mandatory vaccine policy additionally was a form of new Christian baptizing to show who is adherent to the 2030 Agenda of the capitalist elite.

Sovvertire la tirannia della luce will be released exclusively on vinyl. How and why did you make this decision?

Vinyl is definitely our favorite format so it was natural for us to make this choice. We are quite excited for this opportunity; vinyl format is popular again, just like it was some decades ago. It is a dream come true for us.

Do you collect vinyl in your day-to-day life? Do you think different black metal genres sound better on different physical media?

Despite collecting vinyl seeming to be the new trend recently, we have been collecting them for many years. For sure, this format fits very well with some kinds of Black Metal sub-genres. I can’t tell if the sound is worse or better than other media support. For me, it’s more a question of having a bigger cover art/artwork size.

When was the last time you played live? Are you planning on touring or playing any new shows in 2022?

Is there any place or festival you’d like to play in the future?

Playing live is not our “natural dimension.” Having said that, we are still interested in playing live shows, but only in the right context and with bands similar to Comando Praetorio, both in terms of music and attitude.

You’re based in Alessandria, Piedmont. What’s your local metal scene like?

The extreme metal scene in Alessandria has narrowed over the years, and it’s increasingly rare nowadays to find some good bands. But for sure, there are still some great bands like (obviously) Mortuary Drape, Eroded and Enthroning Silence. I generally support new and old bands that demonstrate attitude and coherence of purpose only.

Would you say that there is a specific Italian black metal sound? How does Comando Praetorio fit in it, or would you say your musical direction differs completely?

The Italian Black Metal sound is really distinguishable from the others. Just think of the old “traditional” bands like Death SS, Mortuary Drape, Bulldozer, Necromass, etc. These bands’ sound was significantly different from other scenes at that time.

Our music is strongly influenced by the nature and landscapes of our country. So yes, I’d say the Italian sound inevitably transpires from our music.

What are your metal influences?

I’m particularly attached to Filosofem. That album has a unique atmosphere and sound, still today.

In addition to the names mentioned above, I am also a huge fan of early Swedish & Finnish death metal: Demigod, Demilich, Convulse, Abhorrence, Gorement, Crematory (SWE), to mention a few names… These bands are really different but share the oppressive/weird aura and reflect our devotions to different extreme metal styles. I would also like to point out that inspirations are not confined purely to music.

What about your non-metal musical influences, as well as movies and literature?

The members of COMANDO PRAETORIO live in harmony with their musical and conceptual offering: there is no clear separation between everyday life and artistic research. Without full adherence to a certain conception of the world, the path degenerates and the attitude gets lost. Black metal is an esoteric and archeofuturistic vehicle to reach spirituality and superhumanity through the total erasing of inner mediocrity. Raw and freezing music that represents cold and dehumanized landscapes, a sacred form of art opposing to Christian relationships, political correctness and a lifestyle ignoring the communion with nature.

Are there themes or musical directions you wish to explore more in your future work?

We want to extend/improve the atmospheric parts and experiments with new ambient sounds. Apart from that, you can expect the same Comando Praetorio’s darkness.

We don’t know what the future holds. Much depends on our spare time and our goals. We will record new stuff if we are able to develop new, fresh ideas that are far better than the older ones. Each recording must always be a step forward.

Aeternitas Tenebrarum Musicae Fundamentum, one of the most influential Italian black metal labels, is behind both Ignee sacertà ctonie and Sovvertire la tirannia della luce. What’s it like working with them and how did they contribute to the new release?

We are confident in what ATMF can do for us and we will help them to support the EP. We really believe in Sovvertire la tirannia della luce and we’ve worked hard on it: we spent a lot of time recording, we tried different types of mixing and the final result fulfilled our expectations.

Where was the image from the cover of Sovvertire la tirannia della luce shot? Why did you pick this exact location?

The cover is taken from a photo taken by a member of the band in Brittany. It depicts the Breton dolmen of the so-called “pierres plates” with a menhir on the side. Inside the dolmen there are various depictions of the celestial vault and in particular of the great chariot. In this sense, it is consistent with the meaning of the EP not only from a purely graphic point of view.

If you could live anywhere – real or imaginary – where would it be?

It’s tough to give you an answer!  The critical question for us it’s not “where” to live but “how” to live! As far as we are concerned, we are periodically spending our spare time in trekking, hiking and alpinism. Wilderness is one of the purest aspects of Black Metal; even if it is ever more difficult to find places actually wild and few populated. Unfortunately, the poisoning social media proliferation of selfies and auto promoting connected to pseudo-wilderness, is depowering the magical and esoteric inner spirituality of Wilderness. As always, when a doctrine, in this case the one of the Wild, become something too exposed to social networks it becomes weak. We live according to our music and our lyrical themes: in fact, there is no gap between our daily life and our attitude. We do not have anything in common with ordinary people, with the mass; we have to live in this society and deal with people but this doesn’t mean that we like them. We despise all of that. We despise modern society and all its degenerations.

Which are your favourite albums of 2022 so far?

Relating to the first months of 2022 we could suggest the new Deathspell Omega album as one of the few interesting issues.

Thank you for your time! Do you have any final words for our readers?

Thanks for the support and the interview. Support the Italian underground scene and watch out for our new EP “Sovvertire la Tirannia della Luce”, out now!