Review and photos by BuddyH

Lafayette, LA. It’s not at all the “Cajun Hell” Exodus so eloquently described back in 1989! Great food. Great people. Great modern culture. However, the metal music concert scene is severely lacking. When it was announced that THE METAL TOUR OF THE YEAR consisting of In Flames, Trivium, Lamb of God, and Megadeth was coming to the Cajun Dome (yep, that’s really the stadium name), I began salivating like said Cajuns over a fresh batch of boiled crawfish! I grabbed my best friend and off to the show we went!

In Flames were first to take the stage. The crowd filled in nicely for them and the anticipation was palpable. Finally, the lights went black and the familiar keyboard intro to “Cloud Connected” began filling the dome. This was a great opener for the concert! The crowd reacted immediately with enormous energy that In Flames fed on for the duration of their performance. After the amazing opener, they immediately jumped into an oldie, “Behind Space” from the LUNAR STRAIN album. The band really connected with the crowd between songs, graciously thanking everyone for coming out. The sound was spot on – heavy and clear, and the band sounded absolutely fantastic! The only very minor complaint I have is that the setlist was focused heavily on more recent albums. Unfortunately, there were no songs from my personal favorite In Flames albums, COLONY and CLAYMAN. All in all, In Flames were a fantastic opening act and succeeded in getting the crowd revved up for the following groups!

After the fist-pumping performance of In Flames, Trivium took the stage. By now everyone was well energized and ready! Full transparency – I’m not incredibly familiar with Trivium’s catalogue. I was looking forward to seeing them, as I had heard from friends that they put on a great show. And put on a great show they did! With no elaborate opening fanfare, the band members strolled onto the stage, waived to the screaming crowd, and immediately began with “In The Court Of The Dragon.” What an amazing show opener! With no break, the next song up was “Like a Sword Over Damocles.” Again, another ripping song delivered with a fiery energy that continued throughout their set. Trivium engaged the crowd often and, as with In Flames before them, fans responded emphatically. The band ripped through their remaining songs with incredible intensity!

After quite an impressive outing by Trivium, next up was the mighty Lamb Of God. I must say, the road crew was top notch, as they got the stage ready in what seemed like only a few minutes! The crowd began chanting, “Lamb Of God,” over and over until the stadium went dark. The air was positively electric with anticipation! A large black stage curtain separated the band from the crowd which super-charged the atmosphere even more. The unmistakable spoken word intro of “Memento Mori” began and the audience erupted! A massive explosion signaled the curtain drop and the full band kicked in.

What ensued over the next 1.25 hours could best be described as an all-out relentless battering from a band that seemed as if they had a chip on their shoulder with something to prove! They played with the ferocity of an up-and-coming group but with the skill and precision of seasoned stage veterans. After “Memento Mori,” they transitioned seamlessly into “Ruin.” The pyro kicked in and it illuminated the entire dome! Next, the beating continued with “Walk With Me In Hell.” The one-two-three punch of these classic Lamb Of God tunes was the absolute perfect way to kick off their show! Randy worked the crowd extensively throughout the entire set. He made it a priority to interact with the fans and it was clear that they were very appreciative of the turnout. Their energy was full throttle and never let up from start to finish. The fans were in a frenzy, feeding off the raw emotion and power of these highly entertaining musicians. As expected, the band sounded extraordinary! The setlist? Perfection! Hands down, Lamb Of God delivered one of the best performances I have ever had the pleasure of seeing! 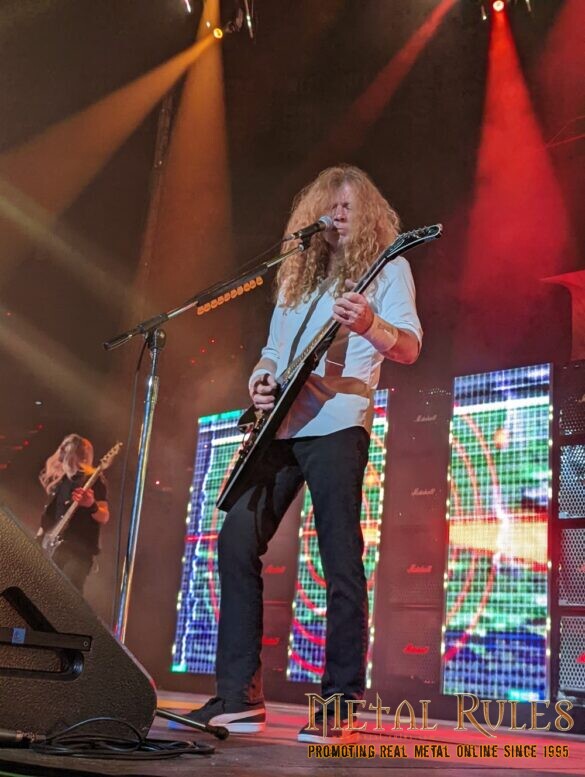 Who could possibly follow Lamb Of God after they laid down the gauntlet with their utterly stunning display of power and aggression? Answer: Megadeth! Again, kudos to the stage crew as they completely dismantled and reassembled the stage in no time. The dome went black, and the crowd became very anxious. From out of nowhere, and completely unexpected, the spoken word intro to “Prince Of Darkness” began booming through the speakers. Just like Lamb Of God before them, a black curtain separated the band from the audience. With a massive explosion and some perfectly timed guitar shrieks, the curtain dropped, and the show opened with the classic thrasher, “Hangar 18”.

During this masterpiece of an opener, it was evident to all of us there that we were in the presence of metal royalty. To watch these legendary musicians perform songs that have become etched in the memories of millions of fans was almost surreal. Without skipping a beat, the next song up was “Dread And The Fugitive Mind.” This song selection was quite a surprise! Again, without any sort of break, they ripped into “The Conjuring.” Seemingly every fan from young to old knew the lyrics to this song, further illustrating the impact Megadeth have had on metal throughout the years. Dave talked to the crowd very sparingly. Megadeth were definitely all business on this night. And business was good! Sorry, I couldn’t resist! The rest of the set was executed with surgical precision. The sound was the perfect balance of power and clarity. Would you expect anything less? The only complaint I had was the setlist. There were a few headscratcher selections such as the aforementioned “Dread And The Fugitive Mind,” “She-Wolf,” and the instrumental “Conquer Or Die.” Don’t get me wrong; these are all incredible songs. The omission of metal classics such as “Wake Up Dead” and “Train Of Consequences” felt odd. But no matter. We were treated to a flawlessly performed show by icons who have firmly established their legacy in metal history!