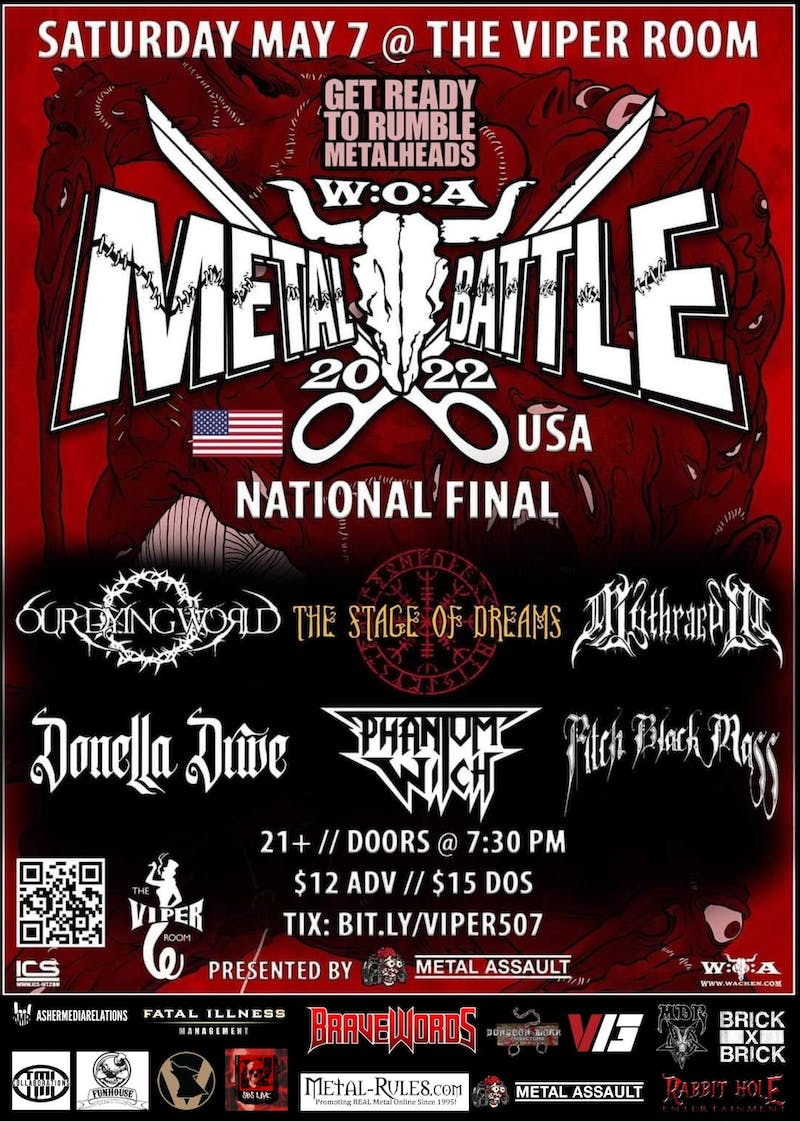 We are now down to the final six independent American bands, where one will be crowned the 2022 champion of Wacken Metal Battle USA and be given the opportunity to perform at the world’s largest metal festival, Wacken Open Air!

And the final six are…

Our Dying World (LA Winner) – Melodic death metal from the greater Los Angeles area. Bringing some of the best elements from every genre, they’re hoping to bring a new feeling to the metal world and dissolve the barriers between genres to make them fit seamlessly. ourdyingworld.bandcamp.com.

The Stage of Dreams (Ohio Winner) – Heavily influenced by classic metal bands like Iron Maiden, Metallica, and Judas Priest. Their upcoming EP was recorded at The Vault in Pittsburgh, PA and was produced and engineered by Multiplatinum Producer Dave Hillis. thestageofdreams.rocks

Mythraeum (San Diego Winner) – An alchemical process manifested through primal means, Mythraeum is an expression of the rage, misery, and longing that existence provokes. mythraeum.bandcamp.com

Phantom Witch (Bay Area Winner) – They were sent to this time from 1986 to bring Thrash to the future. Hold on to your butts.

For its last three years (2017-2019), Wacken Metal Battle USA has hosted battles across the country to send one independent metal band to perform at the world’s largest metal festival Wacken Open Air in Wacken, Germany. 2019 saw the festival celebrate its 30th anniversary, but due to Covid, the 2020 and 2021 editions were both canceled. As the metal community regains its strength, Wacken Open Air 2022 will be the 31st edition of the festival and will be held from August 4th to 6th. The 2022 event is already sold out with a line-up that includes Slipknot, Till Lindemann (Rammstein), Judas Priest, Limp Bizkit, As I Lay Dying, Lacuna Coil, Danko Jones, Gwar, Death Angel, Tarja, and many more. Details here.

For over a decade at Wacken Open Air, independent metal bands from around the globe have been performing in front of thousands and competing against one another for one to be crowned champion of the international battle at the festival along with winning multiple prizes. For 2022, Wacken Metal Battle USA is returning to America and will be hosting qualifying rounds in select cities across the nation.

How it works:
Participating cities will host qualifying rounds plus a city final organized by a local city concert promoter where one band will move forward to the American national final (date and city to be determined). The winner of the national final will move on to perform at the Wacken Open Air 2022 and compete against the winners of 29 other countries in a final global battle. All bands will be judged during battle rounds by respected local music industry representatives.

Wacken Metal Battle USA is part of an international competition that sees bands from across the country battle each other for the chance of winning their spot among 29 other countries’ champions, and representing the USA in an international battle of the bands at the world’s largest outdoor metal festival: Wacken Open Air, which has been taking place in Wacken, Germany for the last 30 years. The winner of Wacken Metal Battle USA will perform at the 2022 festival taking place from August 4 – 6th