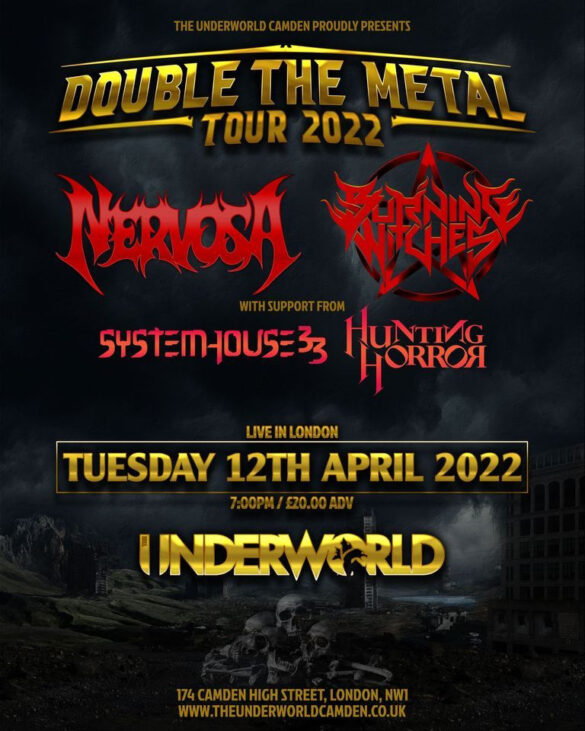 Kicking off the show and representing the UK were deathcore band Virgin Witch from Essex, England. They replaced Mumbai-based metal act Systemhouse33, who were unable to make it to the UK due to visa issues. Virgin Witch’s live performance was dominated by their extremely heavy bass sound, much to the detriment of anyone not wearing ear plugs. Luckily, the vocalist’s screams were audible over the thunderous instrumentation.

The very chatty frontman did his best to excite the small crowd that were watching him, enticing them to “come fucking closer” to the stage, before asking for some more movement. Eventually, the audience warmed up a little after hearing several songs, edging closer to the quartet, nodding their heads to the beat of the music and politely applauding at the end of each track. A booming start to the evening from the British boys.

Hailing from Belgium, Lovecraftian extreme music outfit Hunting Horror took to the stage next. Previously known as Squidhead, their appearance and stage setup certainly intrigued onlookers who edged closer to the stage, curious to hear if the band’s sound matched their interesting visuals.

After their string intro rung out, it wasn’t long before the energy in room had been transformed by a mammoth-sounding rhythm section.

Horror and metal are always a good mix, and the Belgians honoured the work of H.P. Lovecraft with a positively creepy set. People were definitely lapping the riffs up, with roars of encouragement and one guy describing their solos as “beautiful”.

Just before their last song, the leader of the unidentified masked cult told The Underworld how happy they were to be there, causing a man to shout “So are we!” in response, much to the much holder’s amusement.

After eight o’clock, hundreds flooded the venue (most of which were men), which could only mean that it would soon be the women’s turn to shine. Burning Witches marched on, before singer Laura Guldemond commanded the eager masses to go crazy as she wailed like a banshee over the triumphant melodies. Moshers wasted no time getting the pit started as soon as “Executed” began. If Judas Priest and Huntress had a lovechild, it would be Burning Witches. Adorned in (p)leather and silver, the Swiss-founded coven possess everything you could ever want from heavy metal: catchy lyrics, killer solos, ballads… you name it.

Audience interaction was on top form as Laura spoke in between songs, checking to see if every one was having a good time and gushing about how glad the quintet were to be back in London after a couple of years. Camden was at fever pitch when the vocalist crowdsurfed mid-song, a true display of Burning Witches fans’ undying support and her unwavering confidence.

They also highlighted the importance of people uniting for a common cause, dedicating their performance of “We Stand As One” to all who attended. Speaking of unity, the axe-wielding trio Janine Grob, Romana Kalkuhl and Larissa Ernst worked the stage, ensuring fancy finger work could be seen by all and that photographers had ample opportunity to shoot action shots. The chemistry between the ladies is rock solid, making it impossible for those who have only known them in their current incarnation to discern the newer members from the original ones. Lala Frischknecht drummed up a spell under lyrics about battles, death and witchcraft, really bringing life to the power metal aspect of their music. 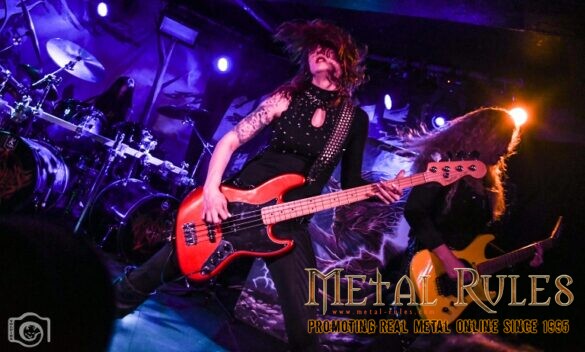 Comical moments included Laura asking “Can we play here together tomorrow, maybe?!”. She then went on to introduce “Hexenhammer” as “a classic one”, adding the following “We released some songs – because we are witches – before you were born!”. This had metalheads throwing their horns up and screaming the words “buuurn alive” from its chorus.

Laura bid London goodbye after “Black Widow,” leading to the girls exiting the stage, leaving the packed venue wanting more. Answering keen chants of “one more song”, the five piece returned. Saving one of the best ’til last, Burning Witches played “Burning Witches” from (you guessed it) their debut album Burning Witches. Every body seemed to be having the time of their lives fist-pumping and having a good singalong. The five-piece definitely showed the men how it’s done, leaving the crowd mesmerised and clapping long after they had finished.

International thrashers Nervosa really brought the house down with their colossal performance. Songs from last year’s Perpetual Chaos went down a treat, namely “Venomous” and the title song, causing mass windmilling, even though most of the crowd were hearing these performed live for the first time. Being sure to keep everyone happy, oldies such as “Masked Betrayer” also invaded the eardrums of audience, who sang along confidently in-between head banging ferociously.

More than 20 minutes after the first moshpit erupted, “Into Moshpit” shook the walls of The Underworld, with help from the human tornado spinning in front of the stage. The riffs in this song are out of this world, it’s easy to forget that Nervosa has only one guitar player.

After asking “how many women are in this venue tonight?”, Diva Satanica answered their whistles and whoops by telling them how proud she was of them. “Kill The Silence” was called “very important” by the front-woman, describing it as being “for all of you, and all those sisters who are struggling around the world. You’re not alone!” It was evident on a lot of faces how much of a connection Nervosa were making with their fans, who reciprocated by giving their all throughout “KTS”.

Guitarist Prika Amaral momentarily took over the microphone duties to introduce the ladies (after some unintelligible grunts and screams). This gave each member the chance to showcase their talents individually, though bassist Mia W. Wallace and Diva got quite creative. Eleni Nota showed off her chops as a drummer, hammering away at the kit for an applause-filled minute, demonstrating that she is small but mighty.

One of the most fantastic moments of the evening had to be Laura from Burning Witches joining Nervosa on stage for “Rebel Soul” to perform a duet with Diva. A lot of fan boys (and girls) were cheering their hearts out even before they had sung a single note, the announcement was reason enough for them to lose their minds. The all-female vocals gave the song a new dynamic, the clean and melodic voices countering each other impressively.

Judging by the shouts of “Nervosa! Nervosa! Nervosa!” right after the band photo, London could have probably braved another few rounds in the pit for the five-piece. These women flew the flag tall and proud for thrash metal… roll on, album number five!