Arcane Tales has returned to the scene with a new album entitled: Steel, Fire And Magic (2022), a work that has earned almost unanimous cheers from all power metal lovers.

It is the seventh album that Luigi Soranno has made in seven years (one each year) and in an incredible way he has managed to maintain a rising line both in composition and production.

Steel, Fire And Magic is a true show of love for the genre; not only for the great result in each of the ten pieces that make up the album, but also for the fact that it is only Luigi Soranno in the composition, recording, mixing and mastering.

For this reason we took on the task of contacting this great musician who, even when fate calls him to be the great reference of Italian power metal, he does not lose his simplicity and keeps his feet on the ground. 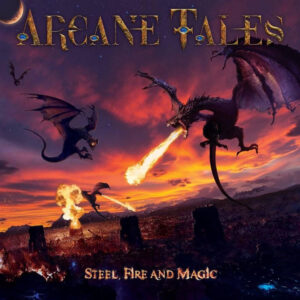 You have maintained a very specific style since your first album, how do you avoid stagnation and continue to create fresh ideas?

Luigi Soranno: I don’t like too much composing repetitive things in general, I think this is the real secret to me. I like to hear this from you and other people who have listened to my music for years. I think this could mean I have my own style in the symphonic power metal genre and this is so good, because you have many standards to satisfy and often you can simply fall in copying someone else.

The positive response has been almost unanimous, has this feedback taken you by surprise?

Luigi Soranno: Well, I have to say I wasn’t expecting at all this great response from critics and listeners. I mean, I always wished to have a huge feedback every time I was launching a new album, but this time it has really gone beyond my expectation. I admit.

Last time you mentioned that your lyrics are based on your own fantastic saga, but that you don’t do it chronologically so as not to limit yourself creatively, what were your motivations this time when writing the lyrics?

Luigi Soranno:I simply try to describe and transmit the emotions of my saga in other words beyond the ones I used in the books, because I ever said the music I compose is none other than their soundtrack.

This time I focused on a part of the first book, so I thought it would have been great to make something different from the previous times and I composed songs which had a chronological order, even if they are not tightly consequential to each other.

Did you make the lyrics videos or did you have someone’s help?

Luigi Soranno: Yes, I did. I made all by myself also with the lyric videos. They are not so full of great effects, but in the end I’m really satisfied.

Those videos were very well received. Can this define the course of the future works of Arcane Tales or the reaction of the people does not influence what you could compose from now on?

Luigi Soranno: Well, undoubtedly the listener’s opinion always has value. Of course, in the end I compose what I would like to hear and if it satisfies me fully, I believe that it can satisfy any lover of the genre. I think this is my way to compose since the beginning and I like to think it will be the same in the following years.

In which aspect do you consider that you have taken a step forward in the development of this new album?

Luigi Soranno: Certainly from the point of view of production. Each new release is a challenge in improving myself in this aspect that seems to count more and more, day after day and year after year. I was already quite satisfied with the production of an album like TALES FROM SHARANWORLD, but I realized that with STEEL, FIRE AND MAGIC there’s been new progress. I hope with the next album I will be able to confirm this trend.

Can you describe what a day in your life was like when you worked on the album; how many hours did you spend a day and how many days a week?

Luigi Soranno: This aspect is very variable, of course, depending on my mood and inspiration. There are days when I would be able to compose and record one or more whole songs (it’s happened more than once). Let’s say that I never take a look at the clock when I’m in the making phase. I could spend whole days if I didn’t have to go to work or do something else. I can tell you the voice recordings of the first 6/7 songs of the new album were made in a couple of days, for example.

Today technology allows people like you to create a whole musical project by yourself, to what extent do you think that could transform the music industry and leave behind the concept of “band” as we traditionally know it?

Luigi Soranno: Let’s say that the technology we have been developing for more than a decade is something indescribable from this point of view. I believe that for people like me it can be something that allows you at least to make yourself known and appreciated, despite all the impediments of the case or the little time available.

Anyway, I hope that the bands continue to exist, giving us endless emotions, without disdaining at all “one man band” projects that express their talent, despite doing everything by themselves, perhaps taking advantage of this technology.

The important thing is that music never dies and that it helps us in every way to live our lives better in this world that seems increasingly doomed to collapse.

Do you know anything about Silverstream Records? Did the fact that it is a Ukrainian label compromise the development of this new album?

Luigi Soranno: Well, Silverstream Records, as you well said, is Ukrainian, so inevitably there are still delays for the production of the physical record. They are working at the best of their possibilities, given the circumstances, but I really hope to receive my copies of the album in a short time.

Given the great reaction that this new work has had, don’t you think that Arcane Tales would be successful playing live?

Luigi Soranno: This is a recurring question in recent years. I am drastically realistic and pragmatic. I know that setting up something like this live to me is something almost impossible at the moment, for a lot of reasons that I am not here to list. I focus more on the fact that this project should and can give its best in the studio and on record. In life, however, never say never.

Now that you’ve released the album and it’s gotten such good feedback, what are you planning next; will you give it more publicity or will you focus on something new?

Luigi Soranno: I think for a while I will try to push the promotion of the album. It’s really too early to talk about new music at the moment.

This is a fan to fan question. As a Rhapsody fan, do you like the albums the band has released (both versions of the band) in the last six or seven years? I ask this because I believe that you embody much better the spirit of power that they themselves are no longer capable of embodying.

Luigi Soranno: Interesting question. Let’s say that I really loved the band Rhapsody until the first split with Turilli (I grew up with their music!). About Luca’s albums, nothing to say, his musical genius speaks for him. The last Rhapsody of Fire album with Lione, Into the Legend, had excited me again, it seemed that the flame that had always burned in the compositions of the first two sagas of the band could be ignited again. Unfortunately Fabio later left the band and something in me changed.

In any case, both the bands have continued to compose good music (I really appreciated the album ZERO GRAVITY by TL Rhapsody), but I think there’s only a unique voice that for me responds to the name Rhapsody, his name is Fabio Lione, despite Giacomo Voli is an excellent singer indeed.

Perhaps the tremendous “loss” of my favorite band of all time has definitely ignited in me the desire to compose that music that for years has inspired and excited me. I think this is the secret of my Arcane Tales. I know that to many my project might seem mere emulation, but for me it is a visceral love for a genre that Rhapsody gave me with their fantastic sagas and that I will always try to carry on.

Thank you very much for your time and congratulations for this great work of Power Metal. Any final words for the readers?

Luigi Soranno: Thank you for the chance you gave me! I really appreciate your words and all the support I’m receiving from listeners. Continue to support my music as much as you can, I’ll try never to disappoint you all! Ciao!