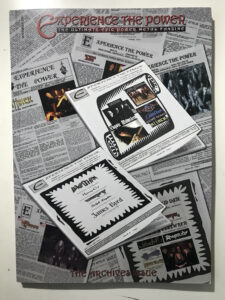 Somehow it seems cool and appropriate that my 600th book review for Metal-Rules.com is a re-printed collection of a Greek fanzine specializing in Power Metal.

Experience The Power is a fanzine that started in the dark days of the mid-90’s. I say ‘dark days’ somewhat in jest because in reality I consider the mid-90’s the golden age of Metal. By the mid-90’s Metal was driven back underground where it belonged. Some veteran bands (Sabbath, Priest Maiden, Dio etc) drifted with the musical tide putting out sub-standard releases. Many newer bands that were late comers and capitalizing on the melodic Metal trend got swept away. Other new bands incorporated rap sounds and stylings. A handful of bands stayed true (Manowar, Savatage) but they were few and far between.

All of this is ancient history and while it was mostly bad news however, the state of the Metal industry meant that there was a void. In the early to mid-90’s there was a huge gap and a huge unmet demand for real, traditional, classic and true Metal. The fans wanted it and young musicians wanted to make real Metal, Metal without compromise, and a whole scene slowly developed. We saw the rise of bands like Kamelot, Symphony X, Rhapsody, Edguy and many more. These bands are among my favourites hence why, despite conventional wisdom to the contrary, I consider that era the golden age of Metal. Remember, all of these bands paved the way for the new titans of today including Hammerfall, Sonata Arctica, Powerwolf and Sabaton.

These titans of today did not do it alone. Despite little to no industry or mainstream support these bands had champions in the underground who did independent radio shows and fanzines. One such fanzine is Experience The Power.

Formed in 1994 by Steve Totomis in Nikea, Greece, he was (and still is!)  a true champion of these bands and the growing underground scene. Experience The Power ran for seven issues from November 1994 to November of 1996 before going in extended hiatus. The fanzine returned in or around 2020 and us still going strong, and just published issue #16 in 2022. With the recent resurgence in popularity, Totomis realized there is a big demand for those back issues and he has reprinted them. All seven have been reproduced and bound into a budget book form.

This standard 8.5 x 11 paper collection is black and white with a colour cover. Every issue is re-printed in full and in his introductory editorial Totomis explaining that except for some very minor digital editing and clean-up of images, everything else was kept intact to preserve the authenticity of the fanzine.

Totomis is clearly a very hard worker. Each issue is about 24 pages long and just packed, in very small font with tons of information. He was very cleared heavily involved in the underground, soliciting demo’s, interviewing new bands, providing information on labels and of course CD reviews.

In terms of content this was an amazing blast from the past for me. We have very similar tastes and while I was supporting underground Metal, simply as fan a buying CD’s Totomis was writing about them. For me it was amazing to read interviews with Ferngully and Veni Domine, or read reviews of releases Lord Bane, Moon ‘Doc, Medalyon and Power’s Court! He covered pretty much every ‘big’ Prog/Power/Trad band at the time (Helloween, Blind Guardian and so on) but the real value for me was all the exposure of the underground. He also wrote cool features on the best labels of the era such as Limb, and WMMS.  My home nation of Canada, while not in the same leagues as Europe in terms of output was well presented with Anvil, Hanker, Heaven’s Cry, Empyria, Days Of Yore and more.

Totomis tended a review a little on the high side, in one issue his top ten of the month all got 10 out of 10…except one album which got 11 out of 10! I’m a huge fan of the same styles of Metal and I always review very favourably as well so it didn’t really bother me at all. While I don’t totally agree with him it was fun to see any band that was even remotely close to Death Metal or Black Metal; albums by bands such as Necrophobic, Edge Of Sanity, and Nile all getting zero’s. He says, Why do they keep sending me this stuff?

Totomis got more and more proficient as time went on and as he gained more experience. Every issue showed improvement in layout, design, style and writing. He is writing in English to clarify which is not his native tongue but he did a fine job. Experience The Power reminded in the best possible way of another elite zine called Sentinel Steel. It was so fun to read a review that says, ‘Here is this great new band called Edguy. I think they will be huge!” He was so right!

As a keen observer of the Metal publishing sub-industry over the past five years or so more I’ve noticed that and more fanzines are getting collected, dusted off and reprinted in book form. This serves a valuable purpose to preserve this important history of our beloved genre.

If you want these old issues for nostalgia, research or collectability, this collection fills all these demands with ease. For a very reasonable price you too can experience the power! Buy your copy today and subscribe to the new issues!