Sometimes it’s nice to be able to review a short, to-the-point EP. Sure, it’s ace getting stuck into an album of music that can carry you on a journey across vast swathes of narrative, but there’s a simple joy to be had with a quick blast through a four-track. Enabling such joy on this occasion is Northern Ireland’s THE CRUX, with their second release and first in their current incarnation, ‘Time & Space’.

The band opted to record the EP “on the floor” with no click track, meaning what you hear is the captured sound of a band in full flow. A seldom-used method these days with the advancement in recording technology, but one that adds a wonderful earthy quality to proceedings. Despite the stoner influence often having a darker, more dirge-like air, ‘Time & Space’ feels bright and live, which makes for a far more compelling listen. Despite being of 2022, it easily could have been recorded sometime in the last four decades, so massive kudos to the band for their commitment to a more old-school approach to recording.

Not only does it work as a recording technique, it works fabulously for the band’s overall sound. “Being” opens the EP with a stoner-influence hard rock stomp that immediately conjures the image of a band jamming out in a studio room, banging their heads along in a flurry of movement, sweat and hair. The added reverb atop the vocals adds an air of mysticism and aural intrigue that still maintains an enjoyable live feel. The EP’s title track follows and welcomes a slightly darker feel to the fold, including screamed vocals atop the low-strung riffage. The vocal harmonies here are a neat factor in THE CRUX’s favour, adding levity amidst the more gloomy half-time early movements, before the band crank the tempo and finger-flaying riffs up some more.

Yet it is the EP’s final two where the band firmly state their love for the thrash, with “Cornered” raising the tempo further and increasing the aggression in the vocals. Not to mention including some IRON MAIDEN-esque harmonised riffs that instantly transport the album’s sound back a few decades with aplomb. The shuffling, almost djent-like riff that centres “Your Misery Will Kill Us All” is sublime and truly worthy of some headbanging whilst carrying out some air guitar, though the plaudits must go to the vocals here. If all you came for was thrash and aggression, then this EP’s closer is the one to go for as THE CRUX sound downright miffed.

While it is not an EP that will change the world of metal, nor is it one that is reinventing any of the genres that it mixes together, ‘Time & Space’ is a cracking four-piece body of work that should put them in good stead for an album’s release in the future. Stoner and thrash influence hard rock is an interesting mix of subgenres to pull together, but done well by the band and is well worth your time. THE CRUX are on to something. 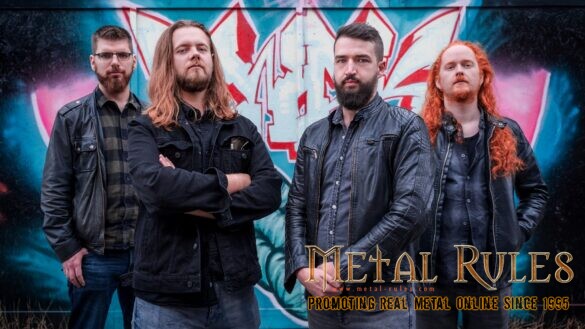