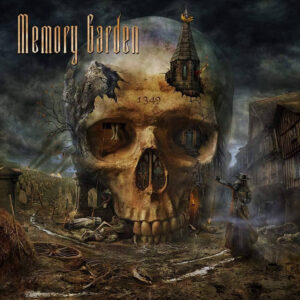 It is a necessary evil perhaps that the Heavy Metal industry is a business. As such the industry is subject to trends and cycles and it can work against a band. The new Memory Garden in such an example. After an eight-year gap between albums the band released their sixth album called 1349.

They have dropped off of Metal Blade and are signed with No Remorse Records. Despite Metal Blade being the bigger label in terms of distribution and exposure, No Remorse is actually a perfect fit for Memory Garden stylistically. The other issue is that this album came out late December of 2021. Most of the major Metal media are done for the year and late albums like this get ignored, which is a tragedy.

1349, named after the year the plague, ‘The Black Death’, came to Europe, is arguably the bands strongest work to date. I’ve been following them since the FOREVER EP released in 1995 on the short-lived but high quality Heathendoom Records, and they continue to grow and improve.

The album is a conceptual piece about the plague featuring intelligent and introspective lyrics. It’s topical too as I suppose one could draw parallels with the global pandemic of 2021 but the story stands in its own merit.

The cover art is stunning. Created by one of my favourite artists, Gyula Havancsak, it is a masterpiece and my album cover the year for 2021. The quality inside matches the outside with an excellent nine track, 51-minute album. The lineup has stayed the same since the previous album.

Memory Garden to my ears are one of the few remaining champions of the classic/trad/power/doom sound. Think about it. Solitude Aeturnus, Memento Mori, Morgana LeFay and Veni Domine are all gone. There are not many bands doing this style anymore.

1349 is metal to the core but there are a few subtle elements that add to the soundscape. For example, the bit of gentle acoustic piano at the beginning of the melancholy closing track, ‘Blood Moon’ or the female vocals in ‘River Runs Black’ all enhance the songs. The production is clear and powerful with a good thick guitar tone. The album surges along, mid-tempo and weighty, with just a hint of pace when needed.

As I mentioned in my opening paragraph, unfortunate circumstances conspired against this album. If 1349 had come out earlier (or even in 2022) I have no doubt in my mind that this superb record would have lot a lot more recognition and exposure. However, it never too late to reacquaint yourself with Memory Garden.