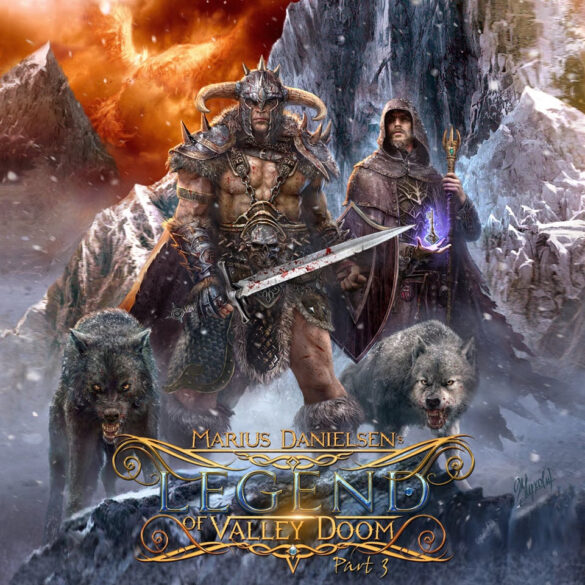 Back in 2020 I wrote an essay tracing the history of the Heavy Metal concept album. During my research for the piece I noticed that many Heavy Metal concept albums were trilogies created and written by one mastermind with the help of multiple guest stars. Examples include Tobias Sammet’s Avantasia, Timo Tolkki’s Avalon, Helena Vale’s Soulspell, Daniel Liverani’s Genius, Till Oberbobel’s Lucid Dreaming and now we can add Marius Danielsen’s Legend Of Valley Doom trilogy to that illustrious list. Late in 2021 Danielsen finished his trilogy and I have decided to review all three albums as a part of this feature. Although Norway is not known for its Power Metal Marius Danielsen helps correct that situation with his elaborate trilogy released on Crime Records. Please feel free to enjoy all three reviews in this feature and it is recommended to read them in order as the reviews build on each other.

Good things come to those who wait. Seven years it took to complete the trilogy! For Part 3, in terms of creation of the album, there was less change than between Part 1 and Part 2. The artistic and production team remained the same this time and the visual presentation remains world class with a 20-page booklet with a beautiful cover, a map, lyrics, notes and so on. The cast of characters and credits are very helpful and to be honest it is hard to keep track of everyone. In terms of the number of guests this trilogy might be the biggest ever with close to 100 different participants!

Roger Watson returns as narrator and he is joined by co-narrator John Rhys-Davies. You might recognize his deep and majestic voice from his famous acting roles in Lord Of The Rings and Raiders Of The Lost Ark.

There are a couple of major changes to the personnel. Kiske no longer plays the Angel Of Light, he is very ably replaced by Alessandro Conti of Trick Or Treat, formerly the Helloween tribute band, so there is some nice symmetry there.

Another major change is that the character of the Dark Lord has evolved into Lord Cremortius. Formerly sung by Mark Boals in the first two albums, the role is assumed by Norwegian Bernt Fjellestad of Guardians Of Time. It always mildly annoying when a major character voice is not consistent across the story but Fjellestad does a fine job.

Stian Kristoffersen (Pagan’s Mind) who did the entire Part 2 is replaced by Ludvig Pedersen, who did about half the drumming on Part 1. On the first two albums nine different bassists shared the bottom-end duties. On Part 3 only one man handles all the bass, Bjorn Lervag from Norway. As a side note: I totally understand having many different vocalists do different roles because each voice is unique and plays a role. The same goes for multiple guitarists, each with an identifiable signature style. Perhaps even drummers can enough if an individual style to sound distinct. But bassists? Can anyone really tell by ear the difference between the 10 different bassists who appear on the trilogy? I can’t tell the difference but maybe Danielsen just wanted to work with more people.

The story concluded and there is a bit more action and speed in the plot and accordingly the music is slightly heavier and faster than Part 2. There is are choirs, orchestration multitudes of voices, again a vocalists dream! It was so much fun to pick out all the voices. Anchoring all this is a monster Power Metal framework with plenty of double-kick driven tunes. The terms glorious, bombastic and majestic can easily be applied here.

The plot gets even more complicated and difficult to follow. I would love to see some sort of synopsis on-line. Regardless, the exiled people of Valley Doom flees to Eloroth, kingdom of the dwarves. Meanwhile there are extra characters who go off on side quests and the quest continues to try to gather the seven magic artefacts, including a magic bow, staff, hammer, battle axe , dagger, sword and a key to help defeat Dark Lord Cremortius. The character of Prince Ferago (played by Alessio Garavello of Arthemis) takes an even greater role after the death the of second King Thorgan… I think. Perhaps the only downfall of the story is the lack of a distinct central heroic figure. There is King Thorgan, Prince Ferago, the Warrior King, the Wizard there are a lot of moving pieces on this chessboard! It took me a long time to figure it out and even now I’m not sure if I have fully grasped the complete story. However, the story of high -fantasy mixing elements of Tolkien and Arthurian legend, make this a classic fantasy.

The Legend of Valley Doom saga is one of the most enjoy Metal Operas I have ever heard. There is even a spin-off band now called Eunomia! With this epic trilogy Marius and Peter Danielsen have really created something special and LEGEND OF VALLEY DOOM can stand proudly shoulder to shoulder with any Metal Opera you can name.

1. Seven Ancient Artefacts
2. Journey to the North
3. The Ballad of Arnoth the Wild
4. Mines of Eloroth
5. Battle for Eloroth
6. March into the Storm
7. Bane of Lord Cremortius
8. The Sarlinian Bow
9. Deep in the Mountain
10. Tomb of the Fallen Kings
11. Stars Will Light the Way
12. For Our King and for Our Land