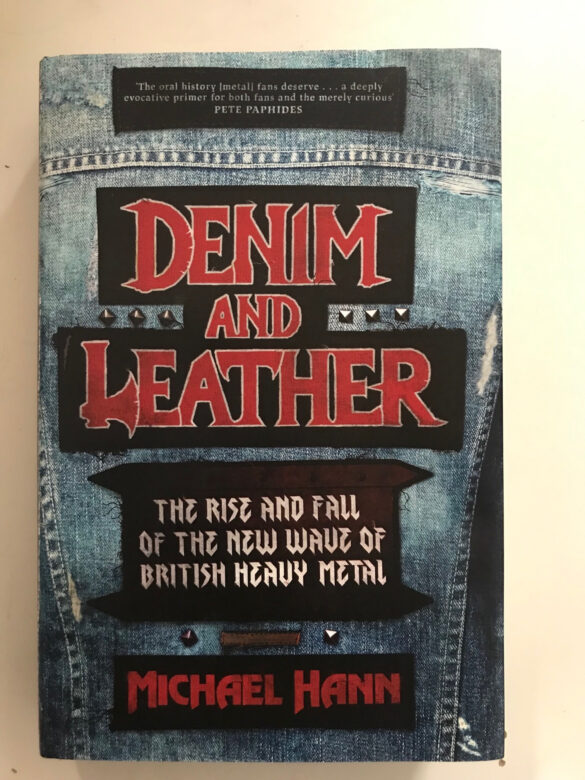 It is the little things. I’ve said it time and again. A simple internet search could save you embarrassment, confusion and even maybe a lawsuit. Use the available resources BEFORE you pick a name for your band, song, book, movie etc!   In this instance, there is already a Metal book called DENIM AND LEATHER!   It came out in 2020. There is also another Metal book called DENIM AND LETTERS from a few years back.  Yes, the Saxon song is awesome and it is an iconic song title, and everyone recognizes it, but for the year 2022, it is so uninspired and unoriginal. The editor and/or publisher should have caught it and counselled the author to choose a better name. There are countless cool, NWOBHM, song-titles that would have been worked as a better book title.

DENIM AND LEATHER is the name of a new book about the New Wave Of British Heavy Metal. Once I got past the miserable title, this book is actually very decent. It is a big, 460+ page hard-cover with a dust-jacket. It is not that stellar to look at with just a few black and white photos scattered across the pages.  There is a very helpful cast of characters, Hann interviewed about 100 people for this book! There is also an interesting ‘Where Are They Now’ section at the end along with your traditional citations and so forth.

Jumping to the back of the book for a moment, on page 449 Hann says one of the more honest things I’ve read about the NWOBHM. He says, “In truth, too, most of the NWOBHM bands were simply not good enough to thrive on their own, away from the security of the movement that birthed them.” This is a brave but accurate admission. There is an enormous amount of teary-eyed nostalgia coming from the British rock press about the NWOBHM, it can do no wrong, but let’s examine the facts. Back in 2001 Malc MacMillan published THE NWOBHM ENCYCLOPEDIA which stands as the greatest, examination and documentation of the movement. In his hallowed tome he included almost 500 bands. How many of those 500 NWOBHM actually made it? A dozen bands perhaps? That is not a great percentage or track record.

Accordingly, Hann wasn’t interviewing guys from obscure bands like Phyne Thanquz, Cheeky or Fireclown. He was interviewing members from the biggest survivors, the Def Leppard’s, The Iron Maiden’s and so on. Although he did interview a member of Ethel The Frog! In fact, if you crunch the numbers he really only interviews members of about twenty bands. Out of 500 bands. He did interview members of another dozen or so bands, bands that were on the periphery of the movement, bands either that were too old to be a part of the NWOBHM; bands like Led Zeppelin, Judas Priest, UFO, Rainbow, Deep Purple, Whitesnake, or bands that were too young to be a part of the NWOBHM, bands like Darkthrone, Celtic Frost and Orange Goblin.

My feeling is that the true value of this books lies not in the interviews with members of the major bands, (people such as Biff Byford Of Saxon, Paul Di’anno of Iron Maiden or Joe Elliot of Def Leppard) because they have all previously spoken at length about the NWOBHM in countless other interviews.  The real value is found in all the other people he interviewed.  Hann tracked down a ton of industry folks; managers, studio owners, journalists, lots of journalists, bar owners, record label people and they all provide valuable insight and an interesting perspective an on those exciting times. If you are familiar with the movement or British rock press in general you will recognize names like Tommy Vance, Malcolm Dome, Neil Kay, Ross Halfin, Geoff Barton and many more.

In case I hadn’t made it clear, DENIM AND LEATHER is an oral history. Through interviews Hann presents a very comprehensive overview of the era. A technique that Hahn employs which I found very favourable was he told both sides of the story. Often a person X will say ‘This happened this way’ and then the next person Y will say, ‘That is not what happened at all!’ and they bounce back and forth. Hann presents both sides without bias or judgement. There was a surprising amount of ego and bickering between the DJ’s and the journalists!

The amount of detail is incredible. The overall story is very familiar, stories about the various pubs, newsletters, magazines, radio shows, demo tapes and quirky personalities that were a part of the early development of the scene. It was an exciting time and stories provided by the people who were they, first hand, adds extra vibrancy and life to these tales.

DENIM AND LEATHER is the culmination of a lot of hard work and it is timely as more and more members of that scene becoming senior citizens with fading memories, desire to care anymore, or even passing away. Three people interviewed for this book passed away before it saw the light of day (Dome, Ravendale, Totton) so it is historically valuable for music fans to have their last thoughts on the NWOBHM preserved.