With the release of their new compilation: ΤΕΦΡΑ / ΣΚΕΛΕΤΙΚΟ ΣΚΟΤΑΔΙ we caught up with the Scotland based death metal outfit, Penny Coffin to see what the band has been up to and has planned for the future. 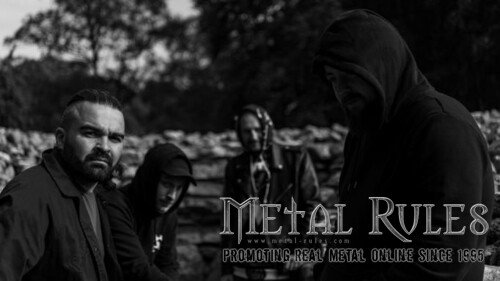 Hi, thanks for joining us. Let’s start with your new release, for those of us who don’t speak Greek could you translate those titles, please? And what made you pick them?

Thanks for having us! ΤΕΦΡΑ translates as the ash of human remains and ΣΚΕΛΕΤΙΚΟ ΣΚΟΤΑΔΙ as skeletal darkness. Our drummer Panos is from Greece and it was his idea to name the first EP ΤΕΦΡΑ, it fits the lyrics to the track Smog really well. I had an eye on calling the second release Skeletal darkness and it made sense for continuity to have that in Greek as well.

As this release is compiled of your first release and a new one, are they linked in any way?

Thematically no, but all the songs were written around the same time. The song Jaws that opens the second EP was actually the first song I demo’d for Penny Coffin. Lyrically they are separate too: if ΤΕΦΡΑ has a theme it would be employment. Skeletal Darkness is more personal for the most part but the last song, finality, returns to the more societal ills.

Brutal Cave Productions will be releasing a CD version of the ΣΚΕΛΕΤΙΚΟ ΣΚΟΤΑΔΙ very soon on March 19th with an unreleased live track. No plans for vinyl but you never know, production costs are high and the runs generally have to be quite large. For where we are just now there would need to be real appetite for it for it to make sense.

What has it been like working with Dry Cough Records? And what made you sign to them?

Andy’s great, down to earth and easy to work with. We were ready to do a small run of cassettes ourselves but I just thought “why not?” and sent the stuff out on a whim. Dry Cough was interested and the were my top choice from the start so it was a no-brainer for us. They have a history with doom and you could see Andy branching out to more death metal, especially that death-doom sound that’s in the Penny Coffin wheelhouse. Dry Cough has the reach and audience already built up and that’s really helped spread our music, seeing the tape sell out was great.

Has there been any changes in the band’s lineup in the making of this new release, and if so how has it made the band change?

Garry Ross joined us on bass last summer. Not only only is he a great musician but he’s brought all his knowledge and experience of live sound production which has been invaluable really. He shares our vision of how the bass should sound in terms of distortion, etc, and he’s taking that to the next level.

You’re described online as a death metal band, is this true in your eyes or do you feel you fit into something different?

Yeah, the largest aspect of our sound is definitely based in death metal so the tag is pretty apt. We kinda consider ourselves an “extreme” band, we like to try and incorporate things from other extreme sounds, be it doom, black metal or grind. I feel there is a lot of freedom within death metal as the history you can pull from is rich and varied. Tempo wise you can go from the slowest crawl to 230 bpm blasts, incorporate elements of atmosphere and still do straight up caveman riffs. As long as there is an element of “extremity” to it then that’s the game.

What inspired the band’s name, Penny Coffin and how long has the band been in existence?

The name Penny Coffin came from Victorian era homeless shelters called four penny coffins. Victorian homeless could pay 4 pence to escape a night on the streets by sleeping in a coffin, the images of them are pretty striking. The name helped give the music some direction and helped inspire some of our initial lyrical ideas as well. We got started initially in the summer of 2020, just myself and Daniel Paton sharing demos back and forth. Panos joined a few months later and his unreal level of musicianship gave the tracks legitimacy

Do you have any gigs or festivals planned for the future?

Yeah, with Hellripper, who are probably Scotland’s most prominent metal band, in Glasgow this coming April. May we have a spot on a bill with Vulgar Dissection and we’re off down to the Cardiff death fest in June with a stack of great bands.

What has been the best show you’ve played before and why?

We’ve actually only played twice due to all the covid shenanigans. Our first gig was great, opened up for Slimelord. The place was packed and we got to meet the guys in Brainbath and Rancid Cadaver who as well as being amazing bands are quality people who accepted us with open arms.

Is your homeland, Scotland, an inspiration on Penny Coffin’s music? Do you take influence from the world around you?

Absolutely. The song Smog was directly influenced on my part by the old pictures of Glasgow tenements, people’s houses black with industrial pollution. The same pollution that would have been contributing to their deaths, from the factories that paid them a pittance and kept them in poverty. Everything we have done lyrically is inspired by the real world, nothing’s fantasy. There’s a personal element to everything which is important for us.

What are the biggest non-musical influences on the band like film, art, literature etc?

George Orwell and Iain Banks are a couple of authors that spark creative ideas. The Forgotten Highlander is a book written by a Scottish soldier called Alister Urquhart of his account as a prisoner of war in the Far East during WW2. Absolute must-read. Old school De Niro and Pacino stuff. Taxi Driver, Panic in Needle Park, etc. I went to see Nightmare Alley recently, that was great, the 1940s version is good too, check it out.

How has the pandemic affected the band? Did you have to cancel anything or did it help in making new material?

The pandemic is probably the reason this band exists. It also directly affected how both recordings were done as we couldn’t be together for the most part due to travel restrictions. Good or bad, that’s part of its character and story so we embraced it full-on. Yeah, covid has also, shall we say, interfered with live gigging but that’s out of our control, you just roll with it, there’s more important things than pretending to be a rockstar every so often.

Do you have a full length studio album planned for the future?

I want to do one for sure, even if it’s just a monument for ourselves and this space and time. We will be recording another batch of songs soon that will see the light of day this year but after that a full length will be the goal. There’s no shortage of material kicking about, more about making sure it’s the right material.

What do you guys do in your spare time when not making music, do you have any other big passions?

Glasgow Celtic first and foremost. I like to live in a little fantasy land of football and music, Oh and I have 3 kids and there pretty cool too I guess.

Are any of you involved in any other bands or projects we might not have heard of and would recommend to people?

Daniel has a slam project called Smashing Big Baby who will be putting stuff out soon. Myself and Garry are finishing up a demo of lo-fi goth music under the pseudonym Sexual Heat/Cold Hole. Panos contributed some drums for his friends over in Greece in Krushya and the recording he did with Glasgow black metal band Nycoptia is out soon too.

What bands and artists are you listening to most at the moment and would recommend to people?

What advice would you give to fans who want to start their own bands?

Don’t worry about thinking you need fancy gear or expensive equipment, just make the best out of what you have. If you have a creative bone in your body just embrace it and enjoy doing creative things. Fuck what people think and just do it for yourself. Quit your job and play unsolicited Oasis covers at night in your local play park, physically not metaphorically run away from your problems.

What do you enjoy most about being a musician, is it the creativity, the lifestyle, etc?

Definitely the creative aspects. Writing music is a buzz for me, I love the process. Pulling stuff from the ether and working on arrangements, layers, production ideas etc, and seeing it all come together.

Finally, do you have anything you’d like to say to our readers?

Life is a terrible thing to waste. Also when ye next going to the gym?

Thank you so much for joining us, I wish you all the best for the future.