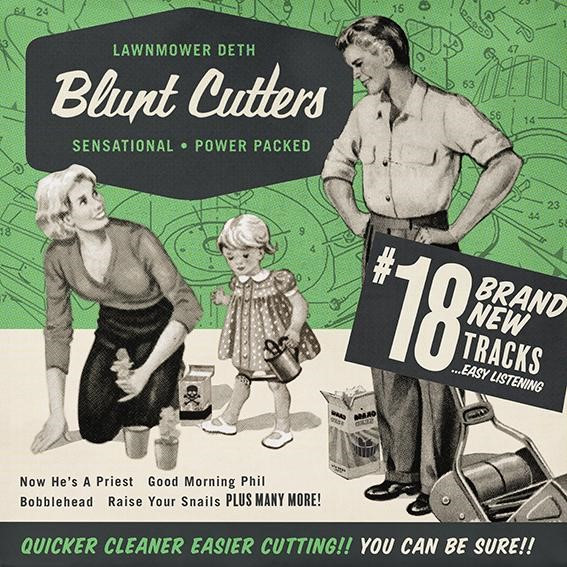 It’s been a long long time since heard from Lawnmower Deth,   28 years to be precise.  The bands last studio effort BILLY was issued in 1994 and I didn’t hear that.  The last Lawnmower Deth album I heard was back in 1992, despite the band having released a couple of singles and a live album in the interim.

If you are not familiar with Lawnmower Deth you are not to be blamed as they had a fairly short-lived  career.  They were one of these bands that mixed goofy humour with some pretty solid crossover Metal but also smacked of novelty not unlike Green Jello, Haunted, Ugly Kid Joe, Garage, Primus, S.O.D., M.O.D.  and and even Anthrax at times.  They were always fun and fairly fierce, sonically speaking.

Dissonance, a sub-label of Cherry Red have released the fourth album called BLUNT CUTTERS.  Housed in a standard digipak, the amusing cover and interior is designed to look an advertisement from the 1950’s.

We are treated to eighteen short songs running for 34 minutes.  It’s a short sharp blast with not much breathing room.   The production is top notch and the delivery is fast and furious and most of all fun.  With fourth-fifth’s of the original line-up, it is evident these old friends are having a grand old time and don’t give give a toss.

As with many of these bands they live and die on the humour and I’m pleased to say it’s fully intact.  Song topics include aging moshers (Don’t dislocate your hip!), bobble heads, snails, space herpes and more. It’s super fun across the board.

I listen to quite a lot of ‘serious’ Power Metal and this is a treat nice break and change of pace.  No orchestras, no guest stars,  just good clean, mosh-mania, thrash with just the slightest hint of crossover. The only song that breaks the mild is an oddly appealing, semi-instrumental, semi-spoken word song called ‘Agency of C.O. B.’   It is a four minute long cautionary tale set in the year 2047.  It’s out of place but a great way to end the album, slower and more melodic, slightly haunting even.  The rest is fast and fun!

Lawnmower Deth are back and they are more than ready to mow you down….again.