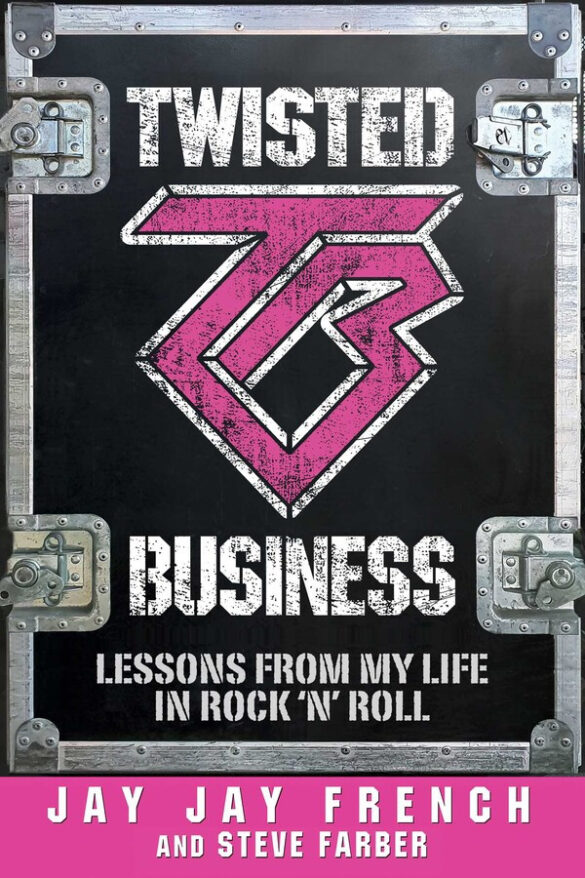 There are generally two types of Twisted Sister fans. There are the ones who are familiar with the band dating back to the 70’s. Then there are a much larger group who became familiar with the band in the 80’s after the big hit in 1984, ‘We’re Not Going To Take It’.  Both groups are fans and not one is better than the other. I found myself in the latter group discovering the band, like so many other North American teenagers, in 1984 with the success of STAY HUNGRY. Overtime I evolved into a fan that appreciates the bands early days just as much, or in many cases even more, than the stratospheric, but short-lived success of the 80’s.

Fans in the first group know that Jay Jay French was the founder and leader of the band, not the outrageous front-man Dee Snider. TWISTED BUSINESS is his first book and it may surprise many people in the second group, the later era fans, about the history of the band. The other surprise is that his first book, arguably an autobiography is also a book about business. The career of French has evolved to the point where he is an in-demand public speaker and business advisor. He has melded his rock and roll experiences and business savvy into one very interesting book.

TWISTED BUSINESS itself is a nice, bold looking hardcover with the iconic/black and pink colour scheme. There are quite a few colour photos spread across the book and I prefer this to the common style of having all the phots in the middle of the book on separate glossy plates. Having the pictures among the text nicely breaks up the book and you don’t have to keep flipping pages to go look at pictures that are referenced in text. There are two appendices and both of them need work. One is called ‘The Twisted Collection’ and is an overview of the main albums releases. It is woefully incomplete with at least ten releases that should have been included.

The second appendix is a list of Twisted Sister tour dates. It’s pretty impressive that French tracked all this in his diaries but again it is incomplete. Naturally the first thing I did was to go look up the first time I saw Twisted Sister and the date was not in the list. How many more are missing? I’m surprised how little the band played between 1987 and 2012…only 30 or so times in 25 years. They had one last good run of festival dates from 2012 to 2016 and that was it.

I also have a very minor additional complaint about the tour dates. The band claims to have played almost 7000 gigs. Well, that is sort of true. In the club daze of the 70’s rock bands would play a circuit and have residencies. It is not like today where a band moves city to city, doing one concert a night. Side note: There are some residences in places like Vegas for heritage acts, Scorpions, Def Leppard, Kiss etc but that is not common.

In the 70’s bands would strike a deal with a bar and play two, three, four short sets a night. So is this a matter of creative accounting? If Scorpions play a three-hour set in Vegas in 2020 and Twisted Sister played four, 45-minute sets (three hours) in a bar in New York in 1976, why does Twisted Sister get to claim they played four concerts and Scorpions only played one? Doesn’t seem fair or accurate. The fact that Twisted Sister played four concerts is ‘sort-of’ true but I’m not convinced. Just because you leave the stage, get a drink, go to the bathroom and talk to girls at the bar for 30 minutes between sets, you don’t get to reset the counter to zero. For the record French says the bands had between 1973 and 1974 the band had 1972 ‘performances’ spread over 396 nights. That is an average of 4.9 (let’s round up to five) shows per night. It doesn’t matter, you have to sell the sizzle in business and French is a self-admitted hustler and shameless self-promoter.

Back to the review…TWISTED BUSINESS, the book is co-written by Steve Ferber a fortune 500 kind of guru guy with several business books under his belt. Combined the pair make a powerful force. The first three chapters are a more conventional account of the early days of French, down to the clichéd, ‘I saw the Beatles on Ed Sullivan show in 1964 and instantly wanted to be a rock star’ story. Growing up a New York Jew with counter-culture parents and full immersion in drug culture mean French had no shortages of adventures and brushes with the law, all of which make for very compelling stories.

The back two-thirds French introduces us to his philosophy and his acronym and in this case it is T.W.I.S.T.E.D. In case you don’t know EVERY business guy has some clever acronym and a ‘system’ that they sell to you via book, DVD, on-line course, speaking engagement etc. Despite being super-smart so many business people don’t realize that the business of selling ‘self-improvement’ products and the ‘business of selling business systems’ is very lucrative. I’m sure we all know people who lap this stuff up and pay top dollar for it. I’m NOT suggesting that French is a charlatan but he is certainly not the first successful guy to come up with an acronym and get paid to talk about himself. Nothing wrong with that! In my estimation it’s better that the public spend their money on self-help/business products than drugs or alcohol.

French’s system is simple and effective. The best systems tend to be that way. Some might suggest he is nicely repackaging common sense in a glam metal façade but you know what they say about common sense being very uncommon these days! French laces his book with good, practical examples from his days as a drug dealer and rock star. Any young rock band would benefit from reading this, although some of the examples might be a bit dated. I talk to many young bands these days who are busy figuring out social media algorithms and overseas merchandise manufacturing and distribution and not so much on how to use a hand-held clicker to count heads and then collect payroll cash in a paper bag from a mob boss sitting behind a desk with a gun in a shady club.

Up on reviewing the tone of this review, I felt it has a bit of a negative tone but that is not my intent. TWISTED BUSINESS is a very compelling read and French is a great advisor, mentor and writer. This is one of the more interesting bio/business books I have read on the topic. The stories of Twisted Sister are great although he does gloss over quite a bit; failed marriages, bankruptcy, in-fighting and so on but people don’t want to dwell on the negative. Overall, the tone of the book was positive and energetic.

I’d recommend anyone pair this up with the 2016 Twisted Sister documentary called WE ARE TWISTED F**KING SISTER, which covered from 1972 to 1982 or so. Another side note: You may want to go and read my 2012 review of Dee Snider’s autobiography SHUT UP AND GIVE ME THE MIC for an alternate perspective. These three things combined give us a really good look into the formation of one of the most successful bands of the 80’s.