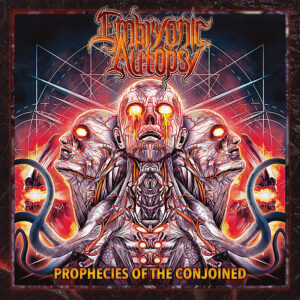 Old school death metal meets high-minded sci-fi conceptualizing on this curious debut album from Chicago’s Embryonic Autopsy. And while it is certainly as brutal as you might think, guessing by appearances, it is nowhere nearly as puerile or grotesque as you may fear – at least depending on how desensitized you might be.

Tracks like “Cauterized Womb Impalement” or “Cannibalized By Octuplets” leave little to the imagination, but there’s a lot more to the album as a whole than pre-/post-natal nastiness. Per the band’s press materials, Prophecies Of The Conjoined revolves around a story line that begins with aliens visiting Earth to provide technology to the Egyptian and Mayan cultures, continues through the UFO crash in Roswell, New Mexico, that gave “modern” scientists alien life forms to study – if you “believe” – to the alien/human hybrids that were thus created and the inevitable sticky end that comes when these “abominations of nature” turn against humanity. So think “X-Files” meets Voivod meets Autopsy or Aborted – with an emphasis on Autopsy/Aborted.

Indeed, most if not all of the nuances of the plot are lost in the vomitous growls, grumbles and urps of vocalist Tim King, ex of tech deathsters Oppressor and founding bassist of long-standing butt-rockers Soil – talk about a dichotomy. In true slam/brutal death metal fashion, the vocals are spewed more than sung – even on the doomily dramatic “Upon The Mayan Throne” where at least a few words peek through morass – and function more as an instrument, adding gnarly icing to an already pretty darn gnarly cake. But if you’re going to go through all the trouble to craft such an involved narrative, a modestly more intelligible approach – a la Cannibal Corpse or the aforementioned Aborted – might have added to the overall effect.

Especially since the music is quite compelling, with Bolt Thrower-like grooves bringing plenty of heft to Embryonic’s otherwise raw-boned, but tech deathy delivery, especially on tracks like the crushing “Splicing The Alien Gene.” The studio “band” here is really just Scott Roberts, who handles just about all of the instruments, and session drummer Arnaud Krakowka. But the pair show equal aplomb charging through the more standard death metal that forms the core of the material here or handling the technical dexterity when things grow more complex, as with “Cannibalized By Octuplets” and its fusillade of drums and tornadic riffs.

Prophecies Of The Conjoined is an accomplished, occasionally impressive work that defies whatever low expectations a band name like Embryonic Autopsy might evoke on first glance. There are plenty of brutal death metal thrills to be had here without a lot of the usual trappings. And while the murky vocals may muddle the story, the garish titles should be evocative enough in most cases to at least get the point across.