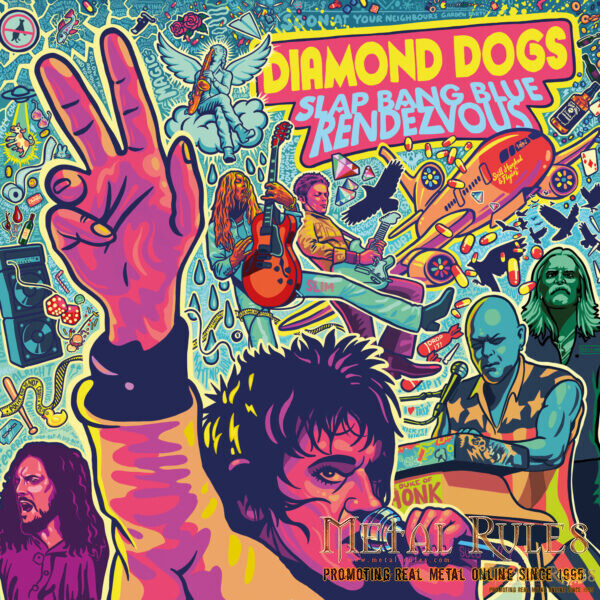 Stockholm-based cult favourites Diamond Dogs are back at it again – this time with a bold double-album set to shake your bones into proper rock’n’roll action! These Swedish legends came together to form the band in 1991, and after their highly acclaimed demo tapes, produced by Max Martin, led them down the path to fame, they released their debut album Honked. Producer Tomas Skosberg was behind the wheel on this one, and from that point on, the bands success skyrocketed. Live shows full of energy, tons of charisma, and endless passion for the music kept fans engaged and excited, and as the audiences grew, Diamond Dogs continued on a lifelong journey through music madness. Whether they were headlining shows, or opening for bands like The Cult, Ian Hunter, Hanoi Rocks, The Damned, Sensational Alex Harvey Band and Nazareth, they always brought the best of their showmanship, earning them a reputation as “one of the best rock’n’roll live acts there is out there”.

Slap Bang Blue Rendezvous is a behemoth in todays terms – a 24 track long indulgence into good old fashioned rock’n’roll, laden with classic themes of love and life on the road, amplified in spirit by production straight out of late 70s Britain. This strong decision to record a double-album couldn’t have been made without utter confidence that each song could bring the energy required to sustain the listener. Luckily, the band’s songwriter and frontman Sulo lacks as little in confidence as he does in inspiration, his pen vibrantly transposing to paper the essence of the music which lives in him, the dynamism of the hits which follow leaving little to be desired.

Opener ‘Alright Brutus I’m On’ fires off torpedoes of nostalgia into the air at light speed, accentuated by ultra-classic female backups (the perfect cherry on top). These layered vocals add even more pizzazz to ‘Rocked, Wrecked, Robbed and Ruined’, a song about the hysteria of rock stardom and wild adventures that follow “a bunch of crazy cats, up for anything fun”. Diamond Dogs show off a softer side of themselves in tracks like ‘A Rock in the Sea’ and ‘Ghost Pain of Your Love’, channelling slower, more introspective emotions in their performance. ‘Common Form of Life’ features a guitar solo with all the sass, attitude, and playfulness of these guys’ adventurous natures. The real standouts, though, come in the form of incredibly skilful and lively piano licks and solos, such as the one in ‘Golden Wheel’. My favourite song on the record, ‘Sunday Haze’, caught me most of all with these great little cascading piano chords in the verse, which ornamented the arrangement gorgeously.

Admittedly, I hoped for at least one song to come up on the queue and send me to my sweet spot – the place where the melody hits deep in my emotions and the tone of the guitar feeds my dark blues addiction. Though I longed for such resolve until the end, I found it impossible to deny how the infectious drive of each musician brought the vision of Slap Bang Blue Rendezvous to life in my eyes through sheer energy. Hats off to you, Diamond Dogs, stay free!

Get your copy of Slap Bang Blue Rendezvouz HERE! 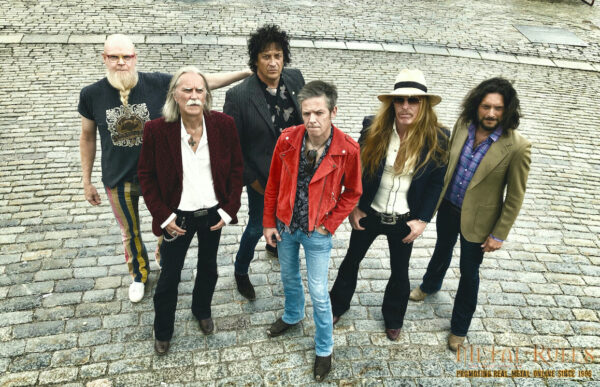