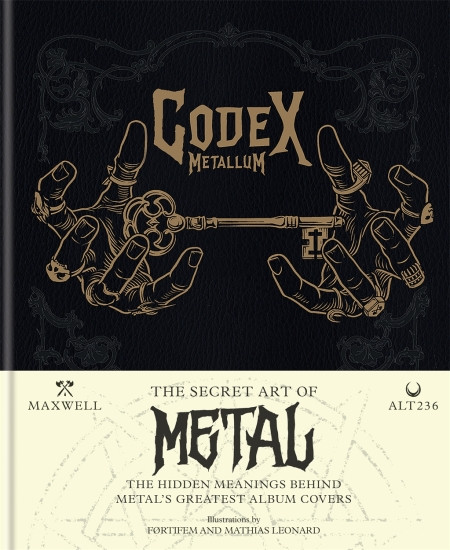 The idea of a book about Heavy Metal album art is not new. I have about a dozen in my library, even more if you include books about specific artists such as Wes Benscoter or Derek Riggs. Many of these art books are decent, well-intentioned and look great but do not add to much to the discussion of album art, other than that they look really good. There are a few exceptions such as world-class …AND JUSTICE FOR ART series of books by Ramon Martos, that set the standard for all Metal books about cover art.

I’m not convinced that the market can sustain too many more coffee-table books that just show album covers. Today people can just take a nice clear shot of their favorite album cover and make it their desk-top background on their mobile device or computer.  Accordingly, art books need to add some additional content to be relevant or compete in a crowded marketplace.   They also have to be bold in their choices of what album covers they choose to reproduce. Many album cover art books show the same (admittedly iconic) album covers over and over to the point where there is no value in showing the covers of Kiss-DESTROYER, Led Zeppelin-IV, Rush-2112 ever again. When I saw CODEX METALLUM I knew this book was going to be in the elite class because it combines bold choices and extra analysis.

The presentation of this 183-page hard cover is most triumphant. The  1/3 size dust jacket adds a touch of visual class as does he golden, embossed hard cover. This book, just looks totally cool designed to look like some ancient tome, and that is before we have even opened it. The sense of mystery is maintained as the authors use pseudonyms. There are many additional bonus pieces of art scattered across the book keeping within the theme of a grimoire type book. The paper is a rougher stock but nice and thick.

As alluded to earlier it is the additional content, the prose and text that helps CODEX METALLUM standout. from the pack.  The book is broken into multiple chapters and subsections. For example, the first section is ‘Incantamenta Diaboli (The Devil’s Incantations)’ and from there each subsection is broken down into broad visual topics such as ‘Goats’, ‘Serpents’, ‘Fire’, ‘Inverted Crosses’ and so on. Then there is a full page (on the left) describing the topic at hand and the right hand has various album covers displayed as examples.

For further example, under ‘Goats’ (p. 21) the history of goats as a symbol of Metal is discussed and three album covers are reproduced. Now this is where our second advantage of this book comes into play; bold choices. No, they do NOT show Venom’s WELCOME TO HELL, Slayer’s REIGN IN BLOOD or Bathory’s self-titled debut.  Those are the predictable and uninspired choices that have been displayed so many times before. Instead we get selections of albums covers by Goatsnake, Witchfynde and Nunslaughter! It is a superb selection representing different era’s, different genres, and different art styles.

These bold, inspired choices is where the book really shines. The selection of album covers from so many genres and eras is very well thought out and well done. From the 70’s to stuff as recent as a few years ago, over 250 album covers are shown and it is not the same old stuff over and over. It is obvious these creators, whoever they are, are very knowledgeable about Metal and also quite contemporary in their selection. It was so delightful to see newer bands like Eternal Champion, Shadowkiller and Twilight Force represented.

This also blends nicely to my next point, the diversity of genres is very well represented. It is so nice to see that for once Power Metal is not neglected as it is in most art books. I was stunned to see album covers by Elvenking, Sabaton and Zed Yago all making the cut. and There is lots of Thrash, lots of Black Metal, lots of Death Metal and lots of cool viking stuff as well. I cannot emphasize enough the quality and diversity of image selection and not just American or English bands either. When was the last time you saw an album cover from Spain’s Angelus Apatrida in a book about album art? Probably never. Yes, there are a few classics contained within; Poison’s LOOK WHAT THE CAT DRAGGED IN, the first Black Sabbath album and Iron Maiden’s POWERSLAVE but those are the minority. Quite often the iconic albums you expect to be shown are referenced in the text.

CODEX METALLUM has the long sub-title of ‘The Secret Art Of Metal-The Hidden Meanings Behind Metal’s Greatest Album Covers’ and the combination of insightful text, informative prose and top-notch image selection means they have easily achieved the goal. Combine all that with the superb overall style and presentation, CODEX METALLUM is one of the best books about Metal album covers I have ever read.