As one of the more proggier songs on the full-length, this track really showcases Amanda Marie Bourdon’s powerhouse voice as well as Matt Petti’s incredible bass performance. This song deals with addiction and how we are in search of the magic elixir (in so many cases alcohol) that will make us perceive a better version of ourselves, which in almost every case turns out to be the opposite.

“Alchemy travels into new territory for Caveat, with Amanda Marie Bourden taking on lead vocal duties for most of the song and showcasing some of Caveat’s most ambitious writing to date. With an almost soundtrack vibe of musically and dynamic nuances, Alchemy creates a progressive listening experience unlike any other you’ve ever heard from us. We are excited to bring Caveat’s new sound to both new and old audiences alike.” adds the band.

Watch “Alchemy” via its premiere on Spaceuntravel’s YouTube channel – youtu.be/7AbAXHqgguk

Caveat has been making music together for the better part of two decades and in that time they have now put out five records (4 Albums, 1 EP). Their latest release “Alchemy” has been a few years in the making. This long-running band has made a name for themselves in the Canadian metal scene all the while refusing to be constricted to the genre rules and employing a vast array of influences and techniques in their music. Their new album “Alchemy” is no different as it keeps the listener on their toes as they experience this complex and detailed musical offering.

The band says that they have been getting steadily more progressive since 2004 when guitarist Joe Sikorski joined the fray. With him, he brought many possibilities in the realm of guitar harmonies and his virtuosic skills as a soloist. They continue to say that they definitely peaked as far as technical prowess on 2006’s Red, but the twin guitars, cross vocalization and wide variety of styles and songs have been a trademark of Caveat for almost 20 years. There is still innovation to be had though which they explain further:

“The creation of Alchemy has been one that has taken a few years to come to fruition, due to the stage and challenges of the modern world, but with that, we feel like the subject matter and music is more relevant than ever dealing with subjects such as addiction, the loss of a loved one, personal growth and even finding that light at the end of the tunnel. Being the band is now going on two decades of making music together, Alchemy is the first album putting newest member Amanda Marie Bourdon on lead vocal duties. She joined during the recording of our last album showing a glimpse of her vocal potential; this time around Amanda steps into the limelight as the main vocalist, which still sharing vocal duties with Greg Musgrave, but offering a new, fresh take on the Caveat sound taking the listener to uncharted territories that have turned out amazing.”

Once again, Caveat proves that they still have a trick up their sleeves and are fully prepared to give fans something new and enticing, yet familiar to enjoy. Heavily focused on personal experiences, the lyrics on “Alchemy” are both dark and light with switches in feeling and; mood ever-changing throughout the album.

Recommended for fans of Opeth, Cynic, and Devin Townsend, “Alchemy” is now available on the Caveatcalgary.bandcamp.com, Spotify, Apple Music. 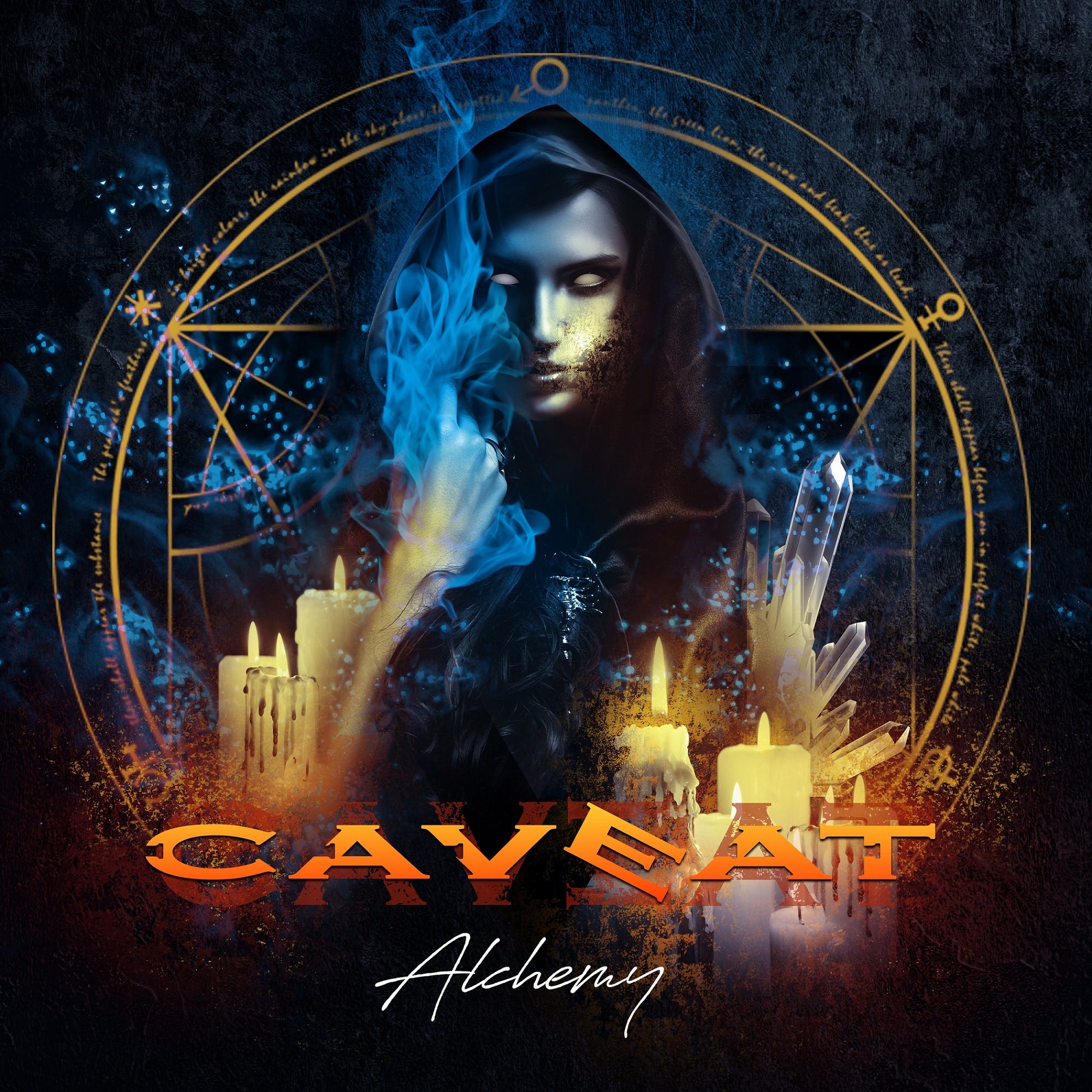 Caveat was formed in mid-2001 by founding members Greg Musgrave on guitar and vocals, Jawad Baloch on drums & Terry Baldwin on bass & backing vocals. Shortly afterward Casey Rogers was asked to join as the new drummer of Caveat. This lineup would go on to record and release the debut album ‘The Biggest Secret’, which they released on May 14th of 2003.

After supporting the album, Caveat decided to expand and recruited Joe Sikorski in 2004 to the second guitar, who had been playing with Thorazine since the mid-’90s.

During 2005 Caveat partnered up with Scarab Productions to record and release a self-titled EP, which ended up landing on numerous campus radio charts and found the band playing larger shows than ever before. After parting ways with Scarab Production in late 2006, the sound of the band evolved yet again, writing more progressive and technical sounding songs, resulting in their 2007 magnum opus full-length album entitled ‘Red’.

To release ‘Red’ Caveat partnered up with Toronto-based indie record label Cyclone Records. To the band’s delight, ‘Red’ was very well received in the metal community and the band played more than ever in & around Western Canada.

Just prior to the release of ‘Red’ several members would branch off and form the deathgrind side project Exit Strategy with Shane Hawco (ex-Thorazine). Exit Strategy quickly became popular in the Western Canadian extreme metal scene. In 2008, after a successful several-year run, Caveat would elect to go into indefinite hiatus to focus on Exit Strategy.

Five years later saw the brief reformation of the band when Calgary Metalfest organizer ‘Big’ Nate Reno asked Caveat to reform to play the inaugural festival in the summer of 2013, and the band obliged. Original bassist Terry Baldwin elected to not be involved with the reunion show, so Caveat turned to former Verbal Deception and current Illuminated Minerva bass player Matt Petti to handle bass duties for the Metalfest performance. After that short hiatus, the band officially reformed at the end of 2014 with Matt Petti replacing Terry Baldwin permanently on bass duties.

Songwriting began for a new album while playing a handful of shows and several metal festivals across western Canada. Recording began in May 2015 and the new album entitled ‘Consummation’ was released on June 24th, 2016. ‘Consummation’ was also a moment of further evolution of Caveat, as local musician Amanda Marie Bourden was asked to join the band as keyboard player and second lead vocalist. Amanda accepted the invitation, and her powerful vocals were featured throughout ‘Consummation’ providing a great contrast to Greg’s clean & brutal vocal attack.

In 2017 and 2018, writing commenced for the album and would feature new vocalist Amanda as more of the primary voice in the new material. This culminated into the most diverse ambitious collection of songs to date. Then in late 2019, recording began for the new album with both Joe and Casey handling main production duties this time. Production was completed in late 2020, but due to the Covid pandemic-related shutdowns, the band decided to shelve its release for the duration of 2021 as a result.

Now Caveat’s delayed fifth album, entitled ‘Alchemy’, is for release in early 2022, and once again Caveat promises to deliver a majestic metallic assault on the senses. Stay tuned and expect the unexpected.