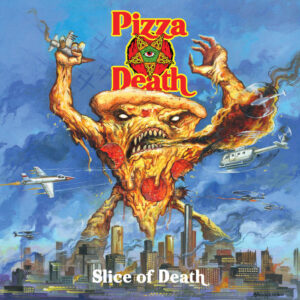 “Pizza Metal” is officially a thing. A few months ago I wrote about Crisix and their PIZZA E.P., and the prevailing opinion was that crossover thrash and pizza go together pretty well. Not willing to be outdone, an unknown troupe of Aussie hoodlums known only as Pizza Death have returned fire with their full length debut SLICE OF DEATH.

Now hear me out – everything about this should only induce groans and mutterings of “okay, that’s enough of that”, except that SLICE OF DEATH is another surprisingly competent collection of pizza themed thrash tunes. Taking heavy liberties from S.O.D., Nuclear Assault, and OG Suicidal Tendencies, Pizza Death delivers the kind of listening experience that Municipal Waste has yet to accomplish – holding my attention for more than a couple of songs.

As fast and mangled as the lyrics are, if you were to listen to SLICE OF DEATH blind and cut out the liberal use of pizza themed samples culled from the likes of Futurama, The Simpsons, and Spaceballs (Pizza the Hut reference for the win), there’s maybe a 70% chance that you might gloss over the pizza themed references across the album’s 20 tracks. Honing in on that sentiment, what you’re left with is a barrage of hyper speed thrash tunes that absolutely flippin’ RAGE. “Beast Inside The Box” sounds like it could’ve been slipped in somewhere on side two of the first Suicidal record, “Marinarsonist” is laden with pit skank vibes, while “30 Minutes Or Death” and “Slicezilla” have Billy Milano’s greasy fingerprints all over them. The tunes themselves are fast, brief, and exceptionally tight – offering up plenty of gang chants, succinct riffs deployed in rapid fire volleys and just enough shred solos to make the whole thing sound a little more respectable.

Nobody’s fooling themselves that Pizza Death is going to rack up any “Album of the Year” awards, but you also shouldn’t dismiss what an enjoyable distraction SLICE OF DEATH is from your daily tribulations. It’s a fast and heavy record with the kind of singular focus that your favorite artists wish they could muster. Best paired with a hot slice and a cold beer, there are certainly less entertaining ways you could spend 22 minutes.